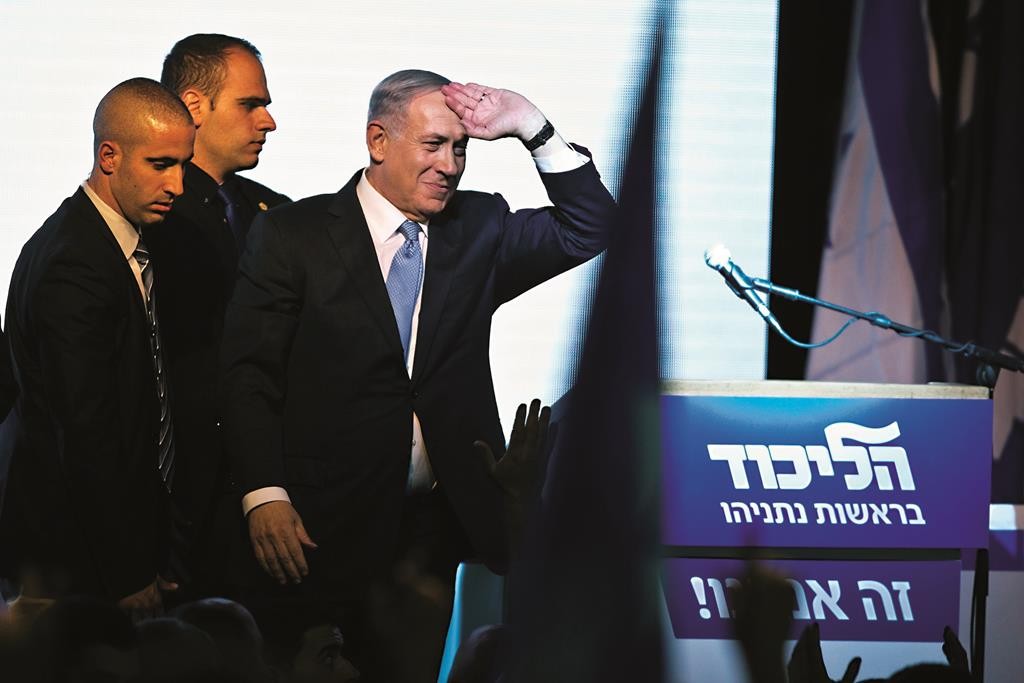 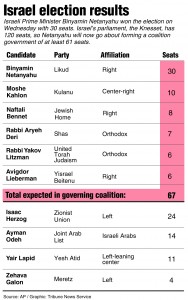 The day after Prime Minister Binyamin Netanyahu’s stunning re-election, against all odds, or at least against all polls, the next challenge already awaits him — that of assembling a governing coalition.

The Likud’s clear-cut, 30-24 victory over Zionist Camp, paves the way for Netanyahu to receive the go-ahead from President Reuven Rivlin early next week to form a government, but it will require the cooperation of some of his fiercest rivals, including Jewish Home chairman Naftali Bennett, Yisrael Beiteinu leader Avigdor Lieberman and the founder of the Kulanu party, former Likud minister Moshe Kahlon.

Both Lieberman and Bennett are reportedly interested in receiving the defense ministry portfolio in return for their support, which, if true, holds the potential for serious wrangling. The fact that they head badly deflated parties, down from double to single digit numbers in the Knesset, will likely not deter them from demanding major ministries.

Jewish Home has the advantage of being the first to support Netanyahu in the campaign, and considers it a “moral debt,” to them to give them first choice of ministries. In the coming negotiations, it is expected to ask for senior positions for MKs Uri Ariel and Ayelet Shaked, as well as Bennett. But Netanyahu needs Lieberman too, and the latter will make the most of it.

As for Kahlon, everyone assumes he will be the next finance minister. Although he did not turn in the blockbuster performance many had looked for at the beginning of the campaign, his party’s 10 seats are still enough to make Kahlon a pivotal part of any coalition.

Addressing supporters at his election night headquarters in Tel Aviv, a smiling Kahlon was not giving away very much, though:

“We want practical solutions. Friends, in places where others gave up, we promised to fight and to win,” he said to applause. “Now is the time to do what is best for all of us. This evening is about recognizing the good. An evening of modesty and good conduct. I am not arrogant, and I certainly won’t gloat.”

Kahlon won’t be thinking only of himself, either. Besides the finance portfolio, he is reportedly also vying for the Construction Ministry, which comes with the Israel Lands Authority that he has promised to dismantle. Then, there’s the question of former Ambassador to the U.S. Michael Oren, a possibility for the foreign ministry.

The Likud party itself will furnish Netanyahu with a full supply of headaches. On Wednesday, MK Miri Regev, who has emerged as a top vote-getter, said it would inconceivable that she would not be appointed to a senior ministerial post. She reportedly has her eye on the housing ministry.

What happens to the losers? In Israel, they head for the opposition, where they usually have little real power outside the ministries, and limited to minority seats on parliamentary committees.

That’s where the vanquished Isaac Herzog and Tzipi Livni are headed, after both they and Netanyahu have publicly ruled out a unity government.

Herzog said on Wednesday afternoon that the opposition was the “only realistic option” for his party.

Trying to put a brave face on a crushing defeat, he told Labor party members on Wednesday afternoon, “We have proven that we know how to be a fighting opposition.”

Herzog said that the Zionist Union would present viable alternatives in all areas and in all subjects to the future “extreme right-wing” government.

“We will not apologize and we will not lower our flags, but we will serve the people who took to the streets and to the ballot box with great hopes,” Herzog said.

Meretz Chairwoman Zahava Gal-On announced Wednesday morning that she was resigning as party leader, after a dismal showing in the elections.

“Meretz has passed the threshold but received only four seats, according to the final results at this time. We can all see the overall picture clearly,” she said in a statement.