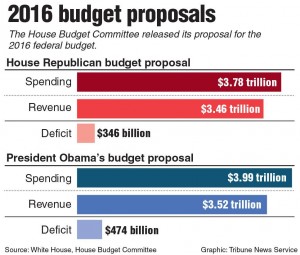 House Republicans on Tuesday proposed higher defense spending and deep cuts to social services including healthcare for the poor in an aggressive new budget plan that seeks to eliminate deficits by 2024.

The non-binding blueprint from House Budget Committee Chairman Tom Price, which is very unlikely to become law as is, proposes $5.468 trillion in spending cuts and interest savings over 10 years compared to current policies.

Like the budgets of Price’s predecessor, Representative Paul Ryan, the document assumes $2 trillion in 10-year savings from full repeal of the Affordable Care Act, President Barack Obama’s signature healthcare reform law — a move that Obama has vowed to reject.

Price’s plan also recycles Ryan’s prescription for controversial changes to the Medicare health program for seniors, turning it into a system of subsidies for private insurance, affecting those born in 1959 or later.

Even if the Republican plan cannot become law, it reasserts the party’s long-standing vision of a smaller federal government, less national debt, lower taxes and a stronger economy, all likely themes in the 2016 presidential campaign.

Price’s plan could struggle to gain the support of deeply divided House Republicans, however. It seeks to skirt “sequester” spending caps, nominally keeping them in place to please deficit hawks, but it boosts military spending by adding nearly $40 billion to an off-budget war funding account.

The move was met with skepticism by Republicans who have threatened to reject the plan if it failed to match Obama’s military spending request, which exceeded the spending caps. Some of the proposed increase would require finding savings elsewhere, making it less certain.

“I’m not convinced this budget does it,” said Representative Ryan Zinke, a former Navy Seal commander and one of 70 Republicans who signed a letter to House Speaker John Boehner demanding higher defense spending.

The plan contrasts with Obama’s 2016 budget plan, which would raise taxes on the wealthy by about $1 trillion through 2025 to help pay for more infrastructure and education spending.

Democrats instantly derided the defense spending move as a “gimmick” and said the plan would shred programs that support the elderly, poor and disabled.

“It will mean the end of the current Medicare guarantee, and millions of seniors in nursing homes will be especially hurt by the irresponsible cuts to Medicaid,” said Representative Chris Van Hollen, the top Budget Committee Democrat.

Price’s plan also would cut $913 billion in Medicaid spending by shifting it to a grant program to allow states to tailor the healthcare program for the poor. It would devolve other programs to states through grants, including food stamps and transportation funding. Pell grants for college tuition would also shrink.

“The $5.5 trillion in decreased spending and the end to annual deficits will mean we can begin to pay down the national debt and stave off a severe and completely avoidable fiscal crisis in the future,” Price’s proposal says.

Like previous Republican budgets, Price’s plan contains no tax increases. It assumes Congress will enact revenue-neutral reforms to the tax code to reduce rates while ending many tax breaks. But it leaves the details for later.

Price said tax reform and other proposals, including a roll-back of financial regulations enacted in 2010, would unleash stronger economic growth that will help slash deficits by more than $1 trillion through 2025.

While these growth assumptions are baked into Price’s budget numbers, they have not been confirmed by the Congressional Budget Office, which only credits economic feedback from the Republican plan for helping to reduce the deficit by $147 billion over 10 years.

This article appeared in print on page 16 of the March 18th, 2015 edition of Hamodia.