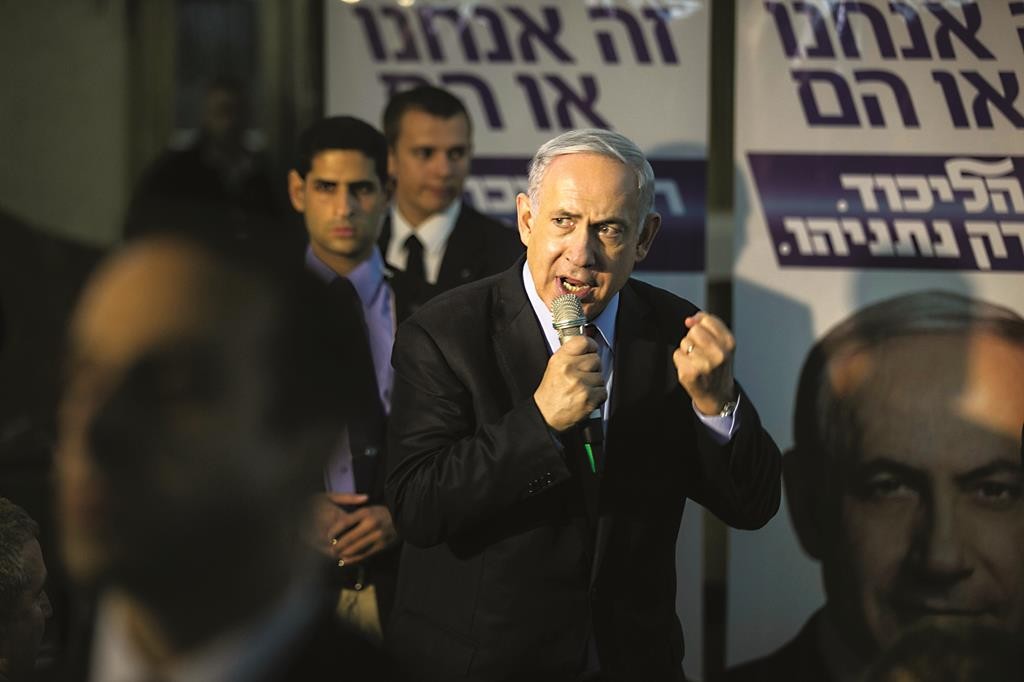 With polls showing Likud three points behind Zionist Camp and signs of grassroots support withering, the ruling party fears the end is near for its dominance of Israeli politics.

It’s not just the anti-Netanyahu Israeli media prophesying his longed-for downfall, either. The prime minister and senior party officials are admitting openly that next Tuesday they could well lose the election.

“We might wake up in a week and find that Tzipi [Livni] and [Isaac] Boujie [Herzog] are prime ministers of Israel,” Netanyahu himself said in a campaign video on Wednesday after a series of polls showed Likud with 21 seats to Zionist Camp’s 24 to 25.

Netanyahu and Katz are seeking to spin their likely demise as an existential threat to the nation, in hopes of scaring the public into voting for them.

“Our security is at great risk because there is a real danger that we could lose this election,” Netanyahu told the Jerusalem Post in an interview published Thursday.

“You will get prime ministers who completely prostrate themselves to any pressure,” Netanyahu said. “Not only can’t they stand up to pressure, they don’t want to stand up to the pressure. They just want to yield and give in.”

Livni responded scornfully, telling students at a Haifa University campaign visit that “the role of a leader is not to scare his people, but to make decisions and deal with threats.”

A number of political analysts have made the case that even if Zionist Camp wins more seats in the Knesset, it will be unable to form a governing coalition, given the current configuration of parties. The Arab Joint List might recommend Herzog, but they can’t be counted in a coalition majority; Liberman’s Yisrael Beiteinu will not sit with Meretz; the chareidim will almost certainly not join a coalition with Lapid.

On the other hand, Netanyahu worries that when the post-election moment comes for President Reuven Rivlin to designate someone to form a coalition, Rivlin will have some score-settling to do with Netanyahu, who did everything he could to thwart Rivlin’s presidential aspirations. The president is reportedly inclined to push for a unity government combining Likud and Zionist Camp, a prospect which Likud has, at least so far, ruled out.

When asked about a possible unity government, Netanyahu told the Post: “It is critical to get the Right to form a government. I don’t believe in a unity government, because a gulf exists between us and the Labor. It’s not the Labor that used to be; anti-Zionists have permeated Labor, so no unity government will hold. Therefore there is no point in trying.”

Meanwhile, there were worrying signs for Likud out in the field. A Likud convention featuring Netanyahu was cancelled due to concern that a poor turnout would embarrass the prime minister, according to a local Ashdod website. Journalists who had been invited to cover the event had to be notified by the Prime Minister’s Office that there would be no convention.

There was bad news from Israel’s security establishment this week, as former Mossad director Shabtai Shavit joined a chorus of former chiefs to batter Netanyahu.

“You and only you turned the United States from an ally to an enemy,” Shavit said of Netanyahu at a Tel Aviv press conference organized by Commanders for Israel’s Security, a group of former officers campaigning against the prime minister.

Shavit, who ran the Mossad 1989-1996, deplored Israel’s position on Iran’s nuclear program as “one big mistake,” which has already “caused damage to the state of Israel and I’m sure it will cause difficulties and damage in the future.”

One Likud strategist was remaining calm, if realistic. Referring to the mood in the Likud camp, he said, “I wouldn’t use the word ‘desperate,’ but it is likely that the other side will get the first chance to form a government, and if they get that chance they probably can,” a Likud strategist said. “The only thing that can stop that from happening is a large Likud.”

There was a bright spot on Thursday, though. As Netanyahu’s rivals Herzog and Livni made their way through a thin crowd in Tel Aviv’s Carmel market, some people started cheering “Bibi, Bibi,” Netanyahu’s nickname, The Jerusalem Post reported.

There was heckling too. One man shouted at Livni: “Your parents are turning over in their graves. They were right-wing and now you’re worse than Meretz!”

The center-left duo made their departure, on the way to another, hopefully friendlier, photo-op.