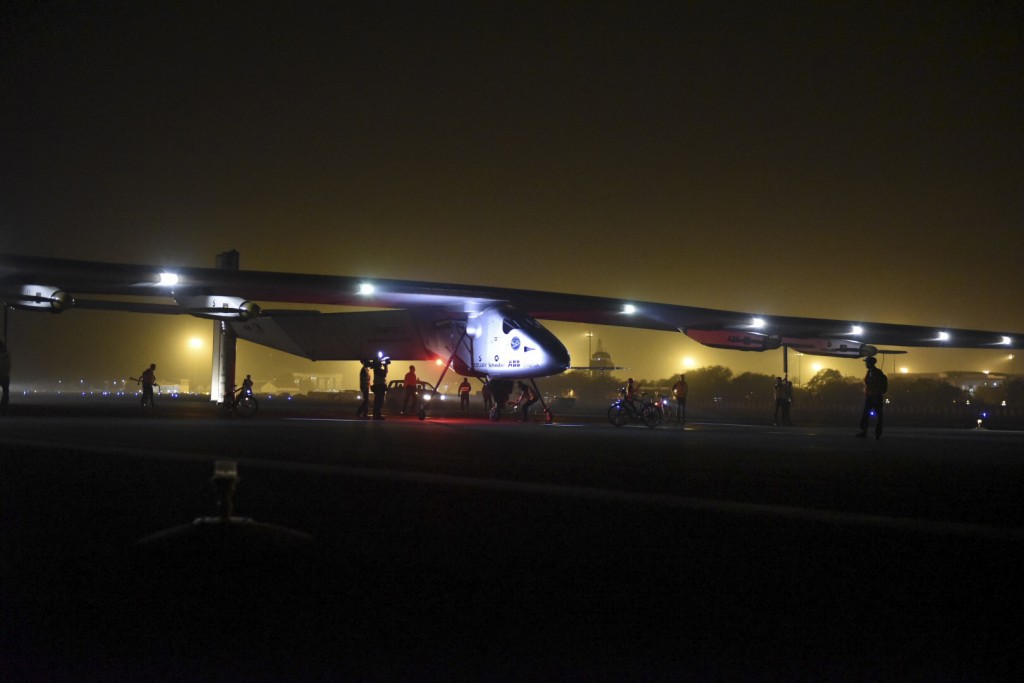 The Solar Impulse 2, the world’s first aircraft powered by solar energy, touched down at Ahmadabad airport in Gujarat state about 16 hours after it took off from Muscat, Oman, for the 1,465-kilometer (910-mile) flight without a drop of fuel.

The Swiss pilots, Bertrand Piccard and André Borschberg, are taking turns at the controls of the single-seat aircraft during their 35,000-kilometer (21,700-mile) journey.

Psychiatrist Bertrand Piccard, 57, is the son of undersea explorer Jacques Piccard and a grandson of balloonist Auguste Piccard. In 1999, he became the first person to circumnavigate the globe non-stop in a hot air balloon. André Borschberg, 62, is an investor and an entrepreneur. He is CEO and co-founder of Solar Impulse, which he started in 2003 with Piccard. The two men will trade off piloting during layovers.

The aircraft’s wings are covered by 17,248 ultra-efficient solar cells that transfer solar energy to four electrical motors that power the plane’s propellers. The cells also recharge four lithium polymer batteries to power the plane at night.

The plane’s ideal flight speed is about 25 knots, or 45 kph (28 mph), though that can double during the day when the sun’s rays are strongest. The plane will reach an altitude of around 28,000 feet (8,500 meters) during the day, and at night dip to around 5,000 feet (1,500 meters) when flying over oceans. During landing and takeoff, the plane is guided by runners and bicyclists who help steady it.

On Monday, Borschberg flew the Si2 from Abu Dhabi, the capital of the United Arab Emirates, to nearby Oman in the first leg of the epic journey. Piccard flew the second leg, to Ahmadabad.

The Swiss explorers say the project – which began in 2002 and is estimated to cost more than $100 million – is aimed at highlighting the importance of renewable energy and the spirit of innovation.

They say the visionary journey is a “strong message for clean technologies.” They hope to mobilize politicians, governments, public figures and private citizens ahead of the Conference on Climate Change of the United Nations, which will define the new Kyoto protocol in December 2015 in Paris.

Si2 is slated to make 12 stops during its journey, including in China and Myanmar, before it crosses over the Pacific Ocean. It will then land in Hawaii and the U.S. Midwest and East Coast before flying over the Atlantic Ocean. It may also stop in southern Europe or North Africa, depending on weather conditions.

Piccard and Borschberg will have to make it across Asia before the start of the monsoon season. They face many other challenges in completing the journey, for which they have been undergoing intense training, as their physical and mental endurance will be tested as they fly over the Pacific and Atlantic oceans. Those legs of the trip mean five days and five nights of flying alone. They aim to rest a maximum of 20 minutes straight, repeating the naps 12 times over a 24-hour period. Goggles worn over the pilot’s eyes will flash lights to wake him up. The pilot will not be able to stand in the cockpit while flying, though the seat reclines for stretching. There is no running water onboard. Armbands placed underneath their suits will buzz if the plane isn’t flying level. The small cockpit is not pressurized, so they will be able to feel the changes in temperature outside, which will range from -40 degrees Celsius (-40 degrees Fahrenheit) to 40 degrees Celsius (104 degrees Fahrenheit).

As it travels some 35,000 kilometers (21,700 miles) around the world, the Si2 will stop in 12 cities. The actual flight days are just 25, but the course of the journey is roughly five months because organizers plan public events for governments, schools and universities along the way. This weekend, the team will head to Varanasi in northern India, then continue on to Myanmar and to Chongqing and Nanjing in China. After crossing the Pacific and landing in Hawaii, the plane will cross the U.S., with stopovers in Phoenix and New York City. After crossing the Atlantic, the team says it will stop in either southern Europe or Morocco before finishing the journey where it began, in Abu Dhabi.