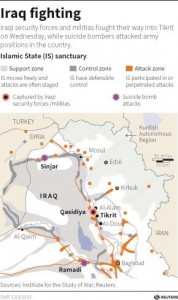 Iraqi soldiers and allied Shiite militiamen swept into the Islamic State-held city of Tikrit on Wednesday, launching a two-front offensive to squeeze the Islamic State out of Saddam Hussein’s hometown in a major test of the troops’ resolve.

Explosions and heavy gunfire echoed through Tikrit, a key way station for Iraqi forces trying to expel the terrorists who hold roughly a third of the country and neighboring Syria. The offensive also will serve as a major crucible for Iraqi forces, which collapsed under the Islamic State’s initial offensive last year and now face street-by-street fighting in one of the group’s biggest strongholds.

Allied Iraqi forces first entered the city through its northern Qadisiyya neighborhood, according to video obtained by The Associated Press. Overhead, an attack helicopter fired missiles as soldiers and militiamen laid down heavy machine gunfire in the neighborhood’s dusty streets as downtown Tikrit loomed in the distance, black smoke rising overhead.

Later Wednesday, allied forces also swept into Tikrit from the south in a pincer movement to squeeze out IS, though some suggested many already fled in the face of the advance.

Tikrit, the capital of Salahuddin province, sits on the Tigris River about 80 miles north of Baghdad. Several of Saddam’s palaces remain there, as do remnants of his now-outlawed Baathist party. Many believe party members assisted the Islamic State group in its offensive last summer.

This article appeared in print on page 3 of the March 12th, 2015 edition of Hamodia.