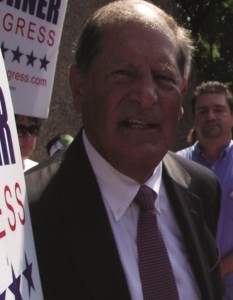 After being defeated last time around at taking over the Queens Republican party, the party is now turning to former Rep. Bob Turner to rebuild a battered apparatus torn apart by infighting and arrests for corruption.

New York State Republican head Edward Cox, sources told the New York Post, will announce on Thursday that Turner is the “de-facto leader” of the Queens GOP. This comes two years after Turner, who in 2011 won a stunning, come-from-behind victory to win a storied Democratic seat in Brooklyn and Queens, was narrowly defeated for the leadership position.

“There will be a united Queens party after Thursday’s meeting,” Cox said.

Cox is stepping in at the request of a majority of elected members of the Queens GOP Committee, who asked him to help unify the party and install Turner as chairman.

“Currently the party has no money, headquarters, regular meetings, organization or direction,” the party activists said in the letter to Cox. “This needs to change immediately.”

“After much discussion among ourselves over the past several months, we are now united in our belief that Congressman Turner is the person best suited to unify the disparate factions within the Queens Republican Party as its chairman and lead us forward.”

The former executive vice chairman, Vincent Tabone, was recently convicted in a scheme to bribe other party GOP leaders in the city to allow former Democratic state Sen. Malcolm Smith to run for mayor on the GOP line in 2013.

Turner, a retired media executive, served one term in Congress before his district was lost when New York lost two seats following the 2010 Census.

This article appeared in print on page 5 of the March 12th, 2015 edition of Hamodia.