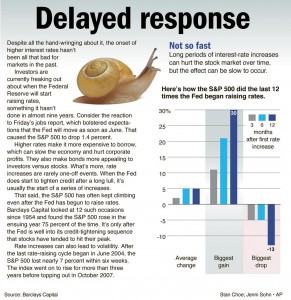 The seventh year of the U.S. bull market is off to a rocky start.

U.S. stocks fell sharply on Tuesday, wiping out this year’s gains for the Dow Jones industrial average and the Standard & Poor’s 500 index. Investors are nervous because the Federal Reserve is likely to raise interest rates soon and because the dollar has been surging against major currencies, including the euro.

Investors dumped stocks from the start of trading and the selling accelerated as the day wore on. All 10 industry sectors in the S&P 500 closed lower.

The prospect of the Fed raising interest rates for the first time in nine years is unnerving investors. The Fed’s ultra-low rate policy, in place since 2008, has allowed companies to borrow cheaply and has made stocks more appealing relative to bonds by pushing bond yields lower. The S&P 500 has tripled since hitting a recession low on March 9, 2009.

A Fed rate increase would also be likely to drive up the value of the U.S. dollar even more. Though a strong dollar sounds good, it can hurt U.S. companies. It makes their goods costlier for foreigners and shrinks the value of profits they collect overseas.

“Regardless of whether the Fed hikes in June or September, it’s coming and it’s not very far away,” said Craig Erlam, senior market analyst at OANDA. “That makes the dollar very strong compared to its peers.”

Talk of U.S. rate hikes comes as central banks in other major countries are trying to jolt their economies to faster growth by lowering borrowing costs. On Monday, the European Central Bank began buying bonds to lower long-term interest rates in a program called quantitative easing, or QE. The central bank in Japan has a similar effort underway. The U.S. Fed ended its bond purchases last year.

When central banks move in opposite directions, it can cause disruptions in the global flow of capital into bonds and currencies and, in turn, stocks.

Steven Ricchiuto, chief economist at Mizuho Securities, thinks U.S. markets are in for trouble as the Fed moves to raise rates.

“Earnings are not improving here, and you’re getting weaker potential overseas earnings,” he said.

Traders think it’s likely that the Federal Reserve will raise interest rates in June given a strengthening U.S. jobs market. A government report on Tuesday showed U.S. employers advertised the most job openings in 14 years in January. That followed a report on Friday that the unemployment rate had fallen to 5.5 percent last month.

Investors are worried that Greece may run out of money soon. Analysts say Europe is better protected now than two years ago against a potential Greek default, but the possibility continues to create uncertainty. Greece’s lenders are withholding rescue money until it comes up with a list of economics reforms. Greece faces a cash crunch this month.

“The Greek government is pushing the envelope with its creditors and the market is scared by the prospect of another long, drawn-out debt negotiation,” said David Madden, market analyst at IG.

Among stocks in the news:

• Barnes & Noble dropped $2.50, or 10 percent, to $22.36 after reporting fiscal third-quarter profit that fell far short of Wall Street expectations. Revenues also fell due to weakness in its retail and Nook businesses.

• Credit Suisse surged after the Swiss bank sought to turn the page on a period of scandals and fines by replacing its CEO with the head of British insurer Prudential, Tidjane Thiam. Credit Suisse rose $1.57, or 6.7 percent, to $25.11.

The price of oil fell sharply on further indications of rising global supplies as Iraq production appeared to be returning to market after weather-related disruptions. Benchmark U.S. crude fell $1.71 to close at $48.29 a barrel in New York. Brent crude, a benchmark for international oils used by many U.S. refineries, fell $2.14 to close at $56.39 in London.