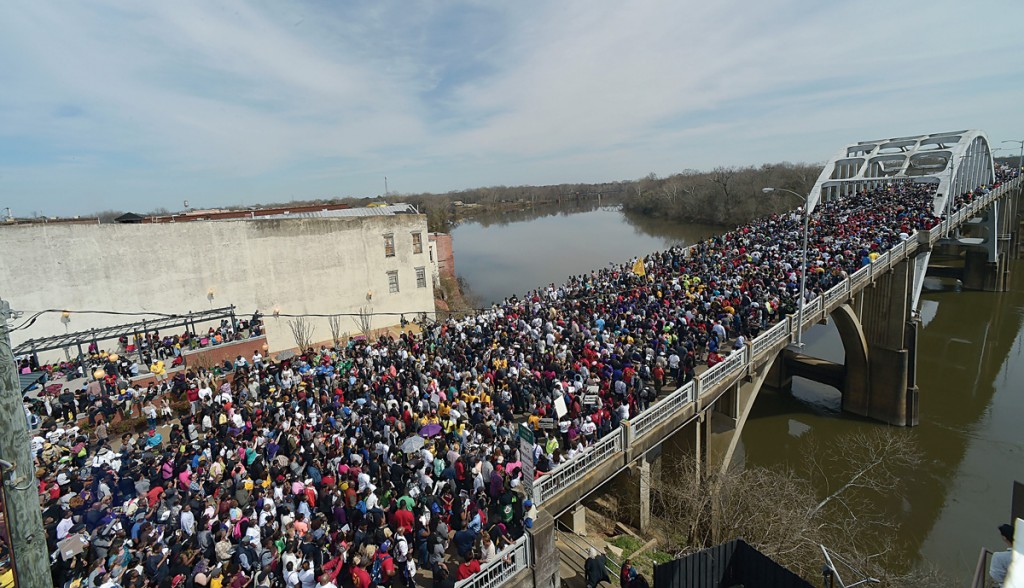 Thousands of marchers, government officials and other public figures gathered Sunday for a second straight day to commemorate the 50th anniversary of a brutal police assault on civil-rights demonstrators that spurred the passage of the Voting Rights Act.

The bridge, which is named after a former grand dragon of the Ku Klux Klan, has become a potent symbol both of change and of the work many here say still needs to be done.

“It has been clear in recent years that fair and free access to the franchise is still, in some areas, under siege,” Holder said at the memorial service. “Shortly after the historic election of President Obama in 2008, numerous states and jurisdictions attempted to impose rules and laws that had the effect of restricting Americans’ opportunities to vote — particularly, and disproportionately, communities of color.”

Holder also drew applause from the audience by making another nod to current controversies in Ferguson, Mo., and elsewhere across the U.S. He noted that the activist Jimmie Lee Jackson, who was killed in Marion, Ala., in 1965, had been an unarmed black man.

“We will march on,” Holder said, calling on his listeners to “challenge entrenched power.”

Outside the chapel, crowds gathered in fewer numbers than the previous day, when President Barack Obama gave a speech on race in America at the foot of the bridge.

The mood in the crowd was lighter and more celebratory Sunday, without the edginess that comes with metal detectors, pat-downs and Secret Service presence.