The first comprehensive report into the disappearance of Malaysia Airlines Flight 370 revealed Sunday that the battery of the locator beacon for the plane’s data recorder had expired more than a year before the jet vanished on March 8, 2014.

The report came as Australian Prime Minister Tony Abbott said the hunt for the plane would not end even if the scouring of the current search area off Australia’s west coast comes up empty.

Apart from the anomaly of the expired battery, the detailed report devoted pages after pages describing the complete normality of the flight, which disappeared while heading from Kuala Lumpur to Beijing, setting off aviation’s biggest mystery.

Families of the 239 people who were on board the plane marked the anniversary of the Boeing 777’s disappearance, vowing to never give up on the desperate search for wreckage and answers to what happened to their loved ones.

Despite an exhaustive search for the plane, no trace of it has been found. In late January, Malaysia’s government formally declared the incident an accident and said all those on board were presumed dead. 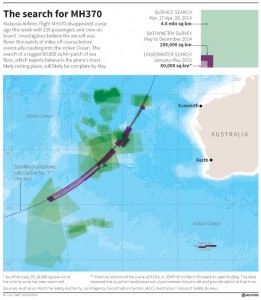 The significance of the expired battery in the beacon of the plane’s flight data recorder was not immediately apparent, except indicating that searchers would have had lesser chance of locating the aircraft in the Indian Ocean, where it is believed to have crashed, even if they were in its vicinity. However, the report said the battery in the locator beacon of the cockpit voice recorder was working.

“The sole objective of the investigation is the prevention of future accidents or incidents, and not for the purpose to apportion blame or liability,” the report said.

The report gave insight into the physical and mental well-being of the flight’s pilot, Capt. Zaharie Ahmad Shah, saying he had no known history of apathy, anxiety or irritability. “There were no significant changes in his lifestyle, interpersonal conflict or family stresses,” it said.

In Sydney on Sunday, Prime Minister Abbott said the hunt for the plane would continue even if searchers scouring a 60,000-square-kilometer (23,166-square-mile) swath of the southern Indian Ocean off Australia’s west coast do not find it.

Prior to Abbott’s comments, it was unclear what would happen if the search of that area, which is expected to end in May, yields no clues. Officials from Australia, Malaysia and China are scheduled to meet next month to discuss the next steps in the search, but Abbott’s remarks indicate that ending it is not an option.

“It can’t go on forever, but as long as there are reasonable leads, the search will go on,” Abbott, whose country is leading the search, told reporters.

Meanwhile, family members of the passengers and crew aboard the plane marked the anniversary of the plane’s disappearance. Voice 370, a support group for the relatives, hosted a “Day of Remembrance” at a mall in Kuala Lumpur with songs, poems and prayers.

This article appeared in print on page 1 of the March 9th, 2015 edition of Hamodia.