Amid a Robust February Jobs Report, Concern Over Stagnant Wages 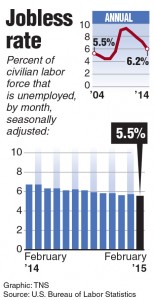 The economy showed surprising strength last month in the face of a ports slowdown on the West Coast, severe winter weather in the Northeast and a rising dollar overseas.

Employers added a robust 295,000 net new jobs in February, and the unemployment rate fell to a post-Great Recession low of 5.5 percent.

“There was a possibility of a February freeze-up, but instead we got a barn-burner of a jobs report,” said Mark Hamrick, Washington bureau chief of financial-information website Bankrate.com.

Still, there was a worrisome reminder in the Labor Department report Friday that the recovery still has a way to go: Americans once again saw just a minimal bump in their paychecks.

Average hourly earnings rose by only 3 cents to $24.78 after an encouraging 13-cent increase in January. For the 12 months ended Feb. 28, wages increased 2 percent.

Although that’s well above the low inflation rate, it’s not nearly the level economists would like to see coming out of a deep recession.

“Clearly, that’s the bus that has yet to arrive,” Hamrick said of wage growth. “There’s a lot to celebrate in this report, but the wage component is quite sobering.”

The top-line numbers were excellent.

Economists were expecting weaker job growth of about 230,000 last month, given the head winds in the economy.

In addition, a 0.2-percentage-point drop in the unemployment rate put it at the lowest level since May 2008.

Part of the reason for the decline, however, was that about 178,000 job seekers dropped out of the labor force. That caused the labor force participation rate to tick down by a tenth of a percentage point to 62.8 percent, near a more-than-three-decade low.

Still, the data showed a labor market that continued to gain momentum.

“You may quibble over some of the details, but it’s hard to argue over a report that has 295,000 jobs as a headline,” said Gus Faucher, senior economist at PNC Financial Services Group.

The upbeat report bolstered expectations that the Federal Reserve would start raising its rock-bottom benchmark interest rate in June.

Rising interest rates would make investing in the stock market less attractive. And with the first Fed rate hike since 2006 appearing more likely, on Friday the Dow Jones Industrial Average dropped 278.94 points, or 1.5 percent, to 17,856.78.

“I fully expect that as the labor market continues to strengthen, as I hope it will, that wage growth will move up, and Americans will find that they’re getting a raise,” Fed Chairwoman Janet L. Yellen recently told lawmakers. “That would be a symptom of a healthier job market.”

Hopes were lifted after Wal-Mart Stores Inc. announced last month that it would raise the minimum pay for its workers to $9 an hour in April, $1.75 more than the federal minimum wage. Analysts said the move showed more demand for workers.

Competition still appears to be largely for low-wage jobs, however. And pay increases for those positions don’t boost overall earnings by much.

“The labor market is tightening, but it’s not tight enough now where employers have to really raise wages in order to attract people,” said Arne L. Kalleberg, a sociology professor at the University of North Carolina at Chapel Hill.

Friday’s report showed that some of the strongest job growth last month was in lower-paying sectors. Restaurants and bars added 59,000 net new jobs, and retailers increased their payrolls by 32,000.

But analysts said there were some positive signs that fueled expectations that wage growth will pick up this year.

The higher-paying construction industry added 29,000 net new jobs despite bad weather in the Northeast and Midwest. Manufacturing, another higher-paying field, boosted payrolls by 8,000. And professional and services firms added 51,000 positions.

“We’re not only looking for waiters and waitresses but consultants, architects and accountants,” said Doug Handler, chief U.S. economist at IHS Global Insight. “The earnings in a lot of these professional services areas are three times higher than in leisure and hospitality.”

Some economists pointed to the Labor Department’s employment cost index, which factors in benefits and other compensation as well as wages. The index was up 0.6 percent in the fourth quarter of last year, a much faster pace than wage growth.

And workers appear more confident that they can get a better job. The rate at which people were quitting jobs was 1.9 percent in December, near its highest level since mid-2008.

Economists in Bankrate.com’s quarterly survey forecast that average hourly earnings would rise 2.5 percent this year, a significant improvement over the 2 percent annual rate through February.

But there are structural reasons why wage growth has been sluggish, such as the decline in private-sector unions and government budget cuts that have kept down wages of public employees, said Kalleberg, author of the 2013 book “Good Jobs, Bad Jobs.”

The labor market will have to improve more for Americans to start seeing bigger paychecks and fuel more robust economic growth, he said.

“I think the economy’s getting stronger, but until wage growth picks up, it’s not going to be what we need,” Kalleberg.

This article appeared in print in the March 9th, 2015 edition of Hamodia.