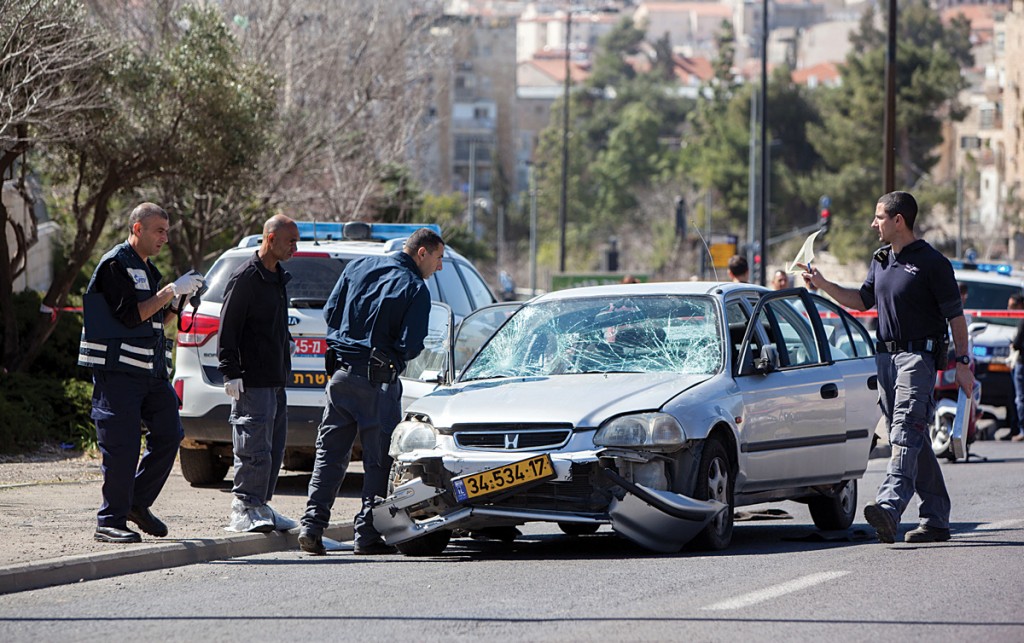 A Palestinian terrorist rammed his vehicle into a group of people standing near a Yerushalayim rail stop on Friday, injuring at least five, including four security officials.

None was seriously injured.

The incident, which police regard as a terrorist attack, took place on a main road in the predominantly Arab east side of the city.

After crashing his vehicle, the driver got out and attempted to stab passersby with a meat cleaver before he was shot and wounded by police from the nearby station, police said.

“The incident was apparently a deliberate attack,” police spokeswoman Luba Samri said, adding that the driver had been taken to the hospital in serious condition.

The incident took place on Shushan Purim, when the streets are busy with pedestrians. In the aftermath, security was strengthened in the city.

Police have yet to determine if the suspect is affiliated with a terrorist organization, or if he acted on his own.

In another terror incident in the capital, Arabs attacked a Jewish man as he walked home from the Megillah reading with his wife.

On Thursday night, Hovev Engelsman, project coordinator for the Yuvalim project of the World Zionist Organization (WZO), was walking through the Yemin Moshe neighborhood when he was accosted, Arutz Sheva reported.

Suddenly, a tall, masked Arab man ran up behind him and grabbed his shirt, shouting for his accomplice to take Engelsman’s cell phone.

“I thought he was joking,” Engelsman recounted.

But a moment later, realizing it was no joke, Engelsman fought back.

His wife ran for help, calling out to a group of teenagers nearby.

“Seconds before help arrived, I saw that one of the Arabs was holding a screwdriver between his fingers and he began stabbing me. While he kept hitting me with a screwdriver, and my jacket is full of cuts, most of them did not hit my body.”