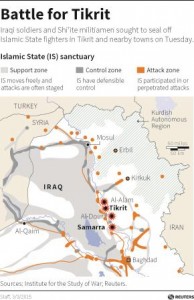 Iraqi troops and Shiite militias battled the Islamic State group on Tuesday on the outskirts of Tikrit, unable to advance further on Saddam Hussein’s hometown as roadside mines and suicide attacks slowed their progress.

Soldiers found some 100 mines and bombs scattered along an 5-mile stretch of road on the way to this strategic city on the Tigris River, Salahuddin deputy governor Ammar Hikmat said.

The discovery underlined how the battle likely will pivot on allied Iraqi forces’ ability to counter such weapons, a mainstay of al-Qaida in Iraq, the Islamic State group’s predecessor, as it fought American forces following their 2003 invasion of the country.

The bombs are “the main obstacle in the way of the attacking forces, which have to wait for bomb experts or to go around the area,” Hikmat told The Associated Press. “And this costs time.”

Fighters from the Islamic State group, which holds both a third of Iraq and neighboring Syria in its self-declared caliphate, have littered major roadways and routes with mines. Such mines allow the group to slow any ground advance and require painstaking clearing operations before troops can safely move through.

Suicide bombings also aid the terrorists in weakening Iraqi forces and have been used extensively in its failed campaign for the Syrian border town of Kobani.

Tuesday marked the second day of the Iraqi advance on Tikrit, with soldiers supported by Iranian-backed Shiite militias and advisers, along with some Sunni tribal fighters who reject the Islamic State group. Hikmat estimated the Iraqi force besieging Tikrit at some 25,000 people. Iran’s semi-official Fars news agency has reported that Iranian Gen. Ghasem Soleimani, the commander of the country’s elite Revolutionary Guard’s Quds Force, was taking part in the offensive.

This article appeared in print on page 9 of the March 4th, 2015 edition of Hamodia.