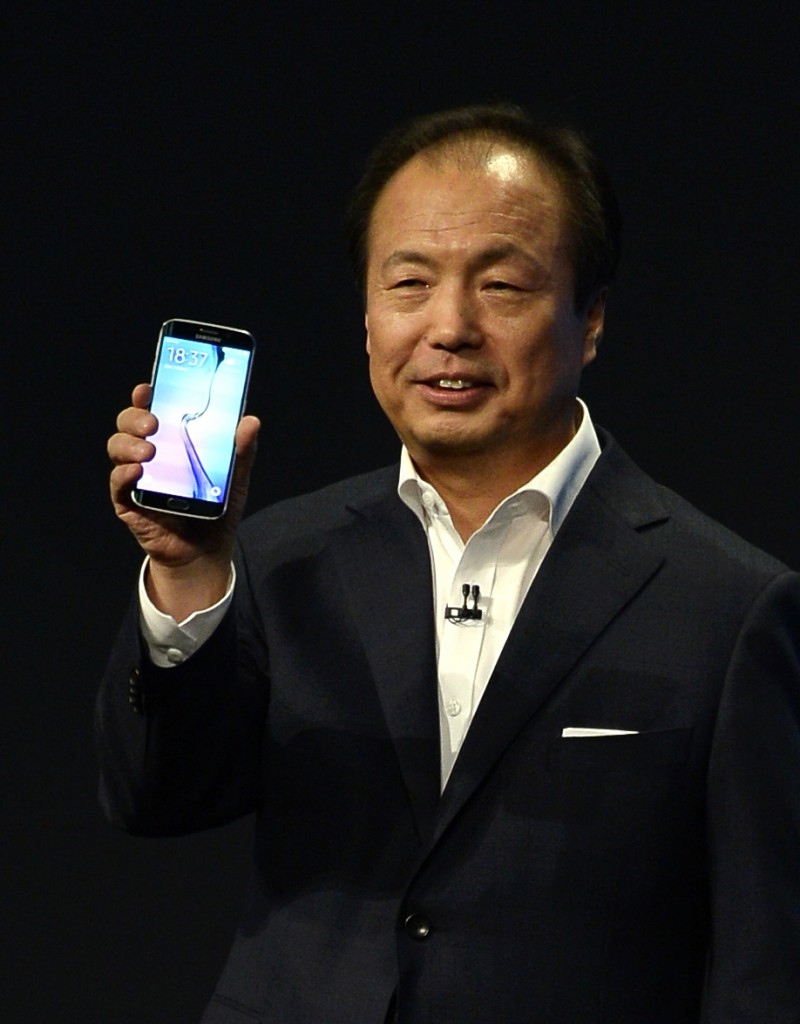 Samsung has unveiled a stylish new flagship phone that ditches its signature plastic design for more stylish metal and glass.

The South Korean phone manufacturer also unveiled a premium model with a display that curves around the left and right edges so that information can be quickly glanced at on the side. The Galaxy S6 and S6 Edge will both include technology for mobile payments, though Samsung isn’t unveiling a service to rival the iPhone’s Apple Pay until this summer.

Although the resolution of the phones’ rear camera remains at 16 megapixels, cameras on both sides will have wider openings to let in more light. The phones also promise better focus and color accuracy – achieved in part by using the infrared capabilities on the phones’ heart-rate sensor to detect lighting conditions.

Earlier Sunday, HTC announced a new HTC One smartphone that also sports a better camera, while keeping such previously lauded elements as a metal design and polished finish. HTC Corp. also unveiled a fitness tracker, the Grip. Unlike trackers from Jawbone and Fitbit, the Grip isn’t meant for couch potatoes looking to motivate themselves by counting steps. Rather, HTC is partnering with sports-clothing maker Under Armour to offer features for those with active lifestyles.

The announcements come on the eve of this week’s Mobile World Congress wireless show in Barcelona, Spain.

Samsung Electronics Co. said its new design took years to develop. As phones got thinner, the company inevitably ended up “with a device that’s very cold and very industrial,” said Hong Yeo, a senior designer at Samsung. The company’s “Project Zero” team “was given the freedom to design our dream device,” he said.

The new models use glass on both sides, encased in a metal frame. The software will also be simplified. Many of the icons, for instance, will be replaced with text to reduce guesswork.

Previous Samsung phones had removable plastic backs, so the battery could be swapped with a spare. Samsung now joins Apple, HTC and others in favoring a better design over that replacement capability. Samsung is promoting the new phones’ ability to charge quickly – in 30 minutes they can reach 50 percent.

The screen remains 5.1 inches, but the display resolution increases to 577 pixels per inch, up from 432 in last year’s Galaxy S5. By comparison, Apple’s 4.7-inch iPhone 6 has 326. The fingerprint sensor is also improved. Instead of swiping down on the home button, you simply touch it, much the way you already do on iPhones. Both the S6 and the S6 Edge are slightly lighter, thinner and narrower than the S5, though they are a tad taller.

Samsung’s new phones will incorporate technology from LoopPay, a startup that Samsung is buying. LoopPay’s technology reproduces the signals from a credit card’s magnetic swipe, so it can work with existing retail equipment. Most rivals, including Apple Pay, require newer equipment.

The Samsung phones will debut overseas on April 10, at prices to be announced. A U.S. launch date wasn’t given. Samsung is also making an S6 version of its Gear VR virtual-reality headset, which currently works only with the Galaxy Note 4.

HTC’s Grip fitness tracker will cost $199 when it goes on sale in North America this spring. The new HTC One phone, dubbed M9, is expected to come out in March in some overseas markets. A U.S. debut is likely in April. Prices weren’t immediately announced.

For years, HTC has kept its phone’s main camera at 4 megapixels and made sensors for each of those pixels larger to capture more light. That’s great for low-light situations, but it results in dull shots otherwise. The camera’s low resolution is particularly noticeable when cropping photos. Customers “love the great low-light performance, but wanted more pixels for editing,” HTC executive Luis Sanchez told The Associated Press.

The new phone will have a 20-megapixel rear camera, on par with other leading Android phones. The lens will be made of sapphire to protect from scratches. The 4-megapixel rear camera from previous models will move to the front, where low-light capabilities are more important because the front doesn’t have a flash.

The new HTC phone also will offer home screens customized to your location. At home, for instance, you might get easy access to social media sites; at the train station, you might get suggestions for transit apps. Like last year’s model, the screen will measure 5 inches diagonally.