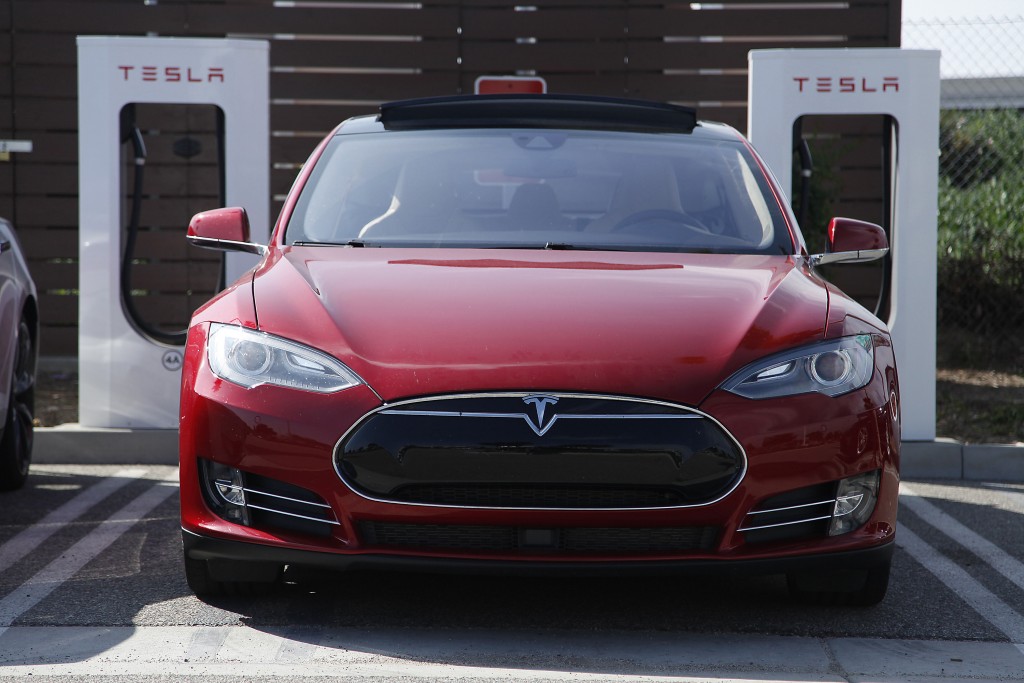 The P85D isn’t entirely new. It’s a faster version of the electric automaker’s Model S sedan that first appeared in 2012. In addition to the original electric motor powering the rear wheels, the D designation denotes a second drive unit (D stands for “dual”) between the front wheels.

Because the electric motors offer up all of their combined 686 pound-feet of torque immediately — there’s no waiting for a combustion engine to rev up — the car takes off like a rock from a slingshot.

The effect is further aided by pavement-biting all-wheel drive, as the two electric motors push all that power through both axles.

It feels even more powerful because it happens silently, in the eerie absence of engine noise.

The dual-motor feature is available on the two models with the larger battery pack, the 85D and the high-performance P85D we tested. It costs an extra $5,000, bringing the price to at least $86,070 for the 85D and $105,670 for the P85D, before adding options or subtracting government subsidies.

The D makes the equivalent of 691 horsepower, which competes well with the elite ranks of gasoline-powered performance cars.

After the launch, the acceleration moderates. Highway passes are merely very fast. The power curve is the inverse of the fastest conventional cars, which gain speed as their gasoline engines move into higher revs.

Drivers of the P85D can take in all this silent speed from the spacious and Space Age cabin of the Model S, with nearly every control packed into its generous 17-inch touchscreen. Two driving modes are offered: Sport and Insane. Only the acceleration changes when you switch between the two — not the top speed. But for full warp-speed drama, we kept the car in Insane mode for a majority of our testing.

The P85D is only going to get faster. Tesla CEO Elon Musk has promised a software update in the near future that will drop its zero-to-60 mph time to 3.1 seconds.

Our test car, in brilliant red, came to $129,820. (Government incentives could rebate buyers as much as $10,000.) That included a technology package with radar-based cruise control, 19-inch wheels, a high-end sound system, panoramic roof and upgraded leather seats.

That’s certainly not chump change, but it’s in line with loaded versions of the Audi RS7 or Mercedes CLS63 AMG — rivals that can’t keep up with the P85D in a straight line.

The Tesla, however, might find it too hard to follow those cars through turns. At just under 2 ½ tons, the battery-laden P85D is a very heavy car.

All Model S cars have their lithium-ion battery packs integrated into the floor of the car to keep the center of gravity as low as possible. That helps. The height-adjustable air suspension also does a great job of keeping the car flat.

But the steering is vague and the handling is numb when you really push it. Not that many Tesla drivers will. Instead, they’ll enjoy a high-tech daily driver that can smoke nearly anything in the next lane.

The original Tesla Model S was an esteemed effort that rivaled anything from a German brand in terms of build quality or execution. That hasn’t changed. The interior is quiet and comfortable, the ride quality is serene. The touchscreen, a masterpiece of clarity, is unmatched in the industry.

The list of complaints is short and trivial. The smallish rear doors are a little tight for tall people, but there’s still plenty of room inside. The center console and doors could use some storage pockets. The cruise-control display is confusing. The back seats have no center armrest.

As with all electric cars, charging the battery is the main challenge. But Tesla’s network of 165 superchargers nationwide, including 13 in the Southern California area, provide a stiff jolt of juice.

While charging at two superchargers, the range gauge in the car’s dashboard showed increases of 127 miles and 163 miles, respectively, during half-hour charging sessions.

Tesla estimates an EPA rating on the P85D at 253 miles of range on a full charge. But those estimates are based on traveling at a constant 65 mph on flat ground, with no headwinds, and without using the air-conditioning.

Our test car achieved about 150 miles on a charge in aggressive driving.

The D portends the much-delayed arrival of the Model X, an all-electric crossover SUV expected to have the same all-wheel-drive underpinnings as the D.

Tesla now says it will start delivering the X this fall, almost two years after its first predicted launch date. The price will be similar to the Model S.

Next on the list of delayed promises is the Model 3, the affordable mass-market electric car on which Tesla’s long-term viability depends. Pegged for the $35,000 to $40,000 range, Musk wants the 3 to hit the market in 2017, but concedes it could take years longer for Tesla factories to reach full capacity for producing the 3.

Now if only it were that good at meeting deadlines.

Our take: Game-changing power from a car that already changed the game