A Hidden Treasure Provides Glimpse Into Past

The First Knessiah Gedolah (Vienna, 1923) was a watershed event in the annals of Jewish Orthodoxy. This was the first gathering of world Torah leaders in the 20th century who united in the struggle against secular and assimilationist movements that were threatening the survival of Torah Jewry. Until today, very few pictures of this historic event were available. The recent release of a short film of this event is illuminating.

The Orthodox community worldwide has been amazed and elated by the discovery of a rare film clip containing a crystal-clear image of the Chofetz Chaim, zt”l, and numerous other Gedolei Yisrael at the First Knessiah Gedolah in Vienna in 1923.

Breathtaking as it is, the film has raised several questions in the community. Could it be authentic? Where was it until now? How did such a treasure get unearthed? Is there more to see?

“It is definitely authentic,” said Rabbi Moshe Kolodny, archivist of the Agudath Israel of America. “We knew that there was a film, and the second half, that shows Rav Yaakov Rosenheim, has been around for a while.”

Less than five minutes in running time, the film captures parts of the Knessiah Gedolah of the Agudas Yisrael. It begins with the arrival of Harav Avraham Tzvi Perlmutter, zt”l, the Rav of Warsaw, and Harav Yisrael Friedman, the Rebbe of Chortkov, zy”a, to the Knessiah.

About a minute from the start of the reel, the Chofetz Chaim, head bowed but unmistakably identifiable, walks briskly through the gates towards the building, flanked by attendants. It is most likely the clearest likeness — and certainly the only live image — that anyone in the last two generations has seen of the hallowed tzaddik.

Later scenes show the interior of the convention and a mixture of Rabbanim, askanim and others who flocked to the scene, in an unusually vibrant image of pre-War Europe.

The story of the film’s discovery centers on the determination of Yosef March, an amateur historian from Williamsburg, and more than 30 years of work by the Moving Image Research Collections (MIRC) staff at the University of South Carolina.

About eight years ago, Mr. March was searching the vast film archive of the National Holocaust Museum in Washington, D.C., for original footage of Gedolei Yisrael. He stumbled upon a record of a film of the Knessiah Gedolah, but as per an agreement with the provider, the museum did not have permission to make the actual footage available to the public.

A few calls to the source, the University of South Carolina, yielded him access to the preserved image as well as the notes of the cameraman, Hans von Pebal. The notes, known as a “dope sheet,” give details of some of the figures shown in the film, which von Pebal presumably gleaned from bystanders. 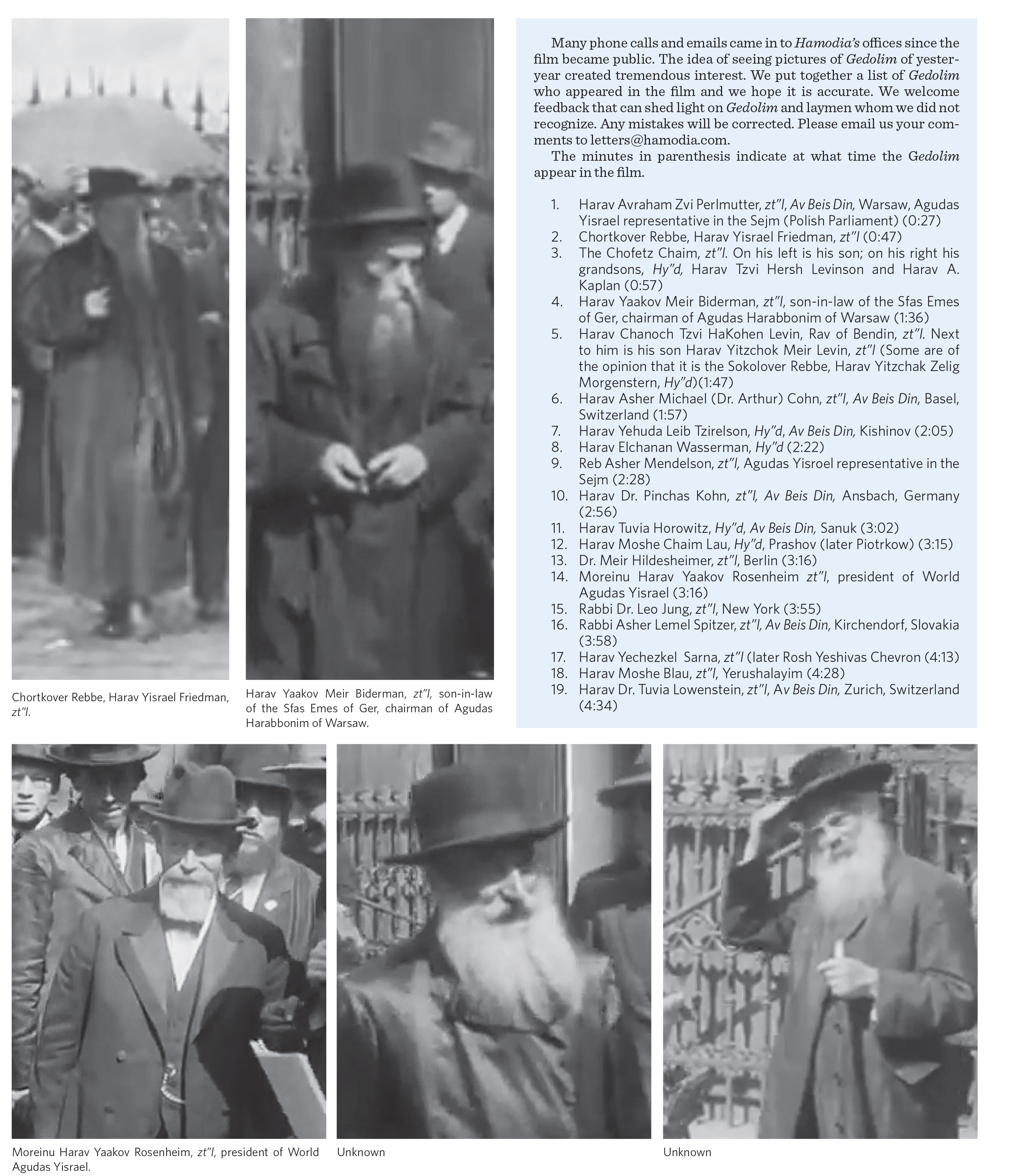 Exciting as the discovery was, Mr. March had one problem: the Chofetz Chaim, and several others in the notes, did not appear in the footage the university showed him.

“Once I saw the dope sheet, I realized that they had the other half somewhere, and that they just had to look for it,” said March.

Looking for it was not as simple as it might seem. In 1980, MIRC received over 75,000,000 feet of news footage as a gift from 20th Century Fox. The boxes of fragile and deteriorating film contained reels of news clips ranging from 1919 to 1944.

“We have spent the last 20 to 30 years piecing together negatives,” Benjamin Singleton, MIRC’s production manager, told Hamodia. “It’s old and brittle. Putting all of them together has been like making a giant puzzle.”

MIRC has been painstakingly working to transfer the original films, kept in old boxes and held together with rusty paper clips, to computer memory that will preserve it. They have also been piecing together different parts of the film clips to make the collection into a usable archive for scholars and the public.

However, Mr. March was persistent in his push to encourage MIRC’s team to search for the missing half.

“I couldn’t imagine that we were going to find it. I have been doing this since 1980 and it is very rare that you find more pieces after a long period of time,” said Singleton, who himself seemed touched to have been part of the discovery. “He [March] called a few times every year for a good few years. He just had faith that we would find it.”

Singleton said that a combination of the sheer mass of material and its deteriorating state made the odds of locating the missing piece “astronomical.”

“I wasn’t always so encouraging,” said Mrs. Ruchie March, a writer and translator who carried on much of her husband’s email correspondence with MIRC. “After a little while, I was getting a little frustrated, but he wouldn’t give up.”

Von Pebel worked as Fox’s cameraman covering events in Germany, Austria and other central European countries. He sent hundreds of hours of footage over his career to Fox’s office in New York, where it was edited and selected for news reels.

“It’s clear from the film and his notes that he [von Pebel] had trouble with his camera that day; these were old crank cameras,” Greg Wilsbacher, curator of the Newsfilm Collections for MIRC, told Hamodia. “Sometimes these clips do rise to the surface and when they find their way to a community that appreciates them, it is a cause for celebration. Based on the notes, we now have the whole thing.”

In recent weeks, Mr. March’s persistence bore fruit. MIRC had been alerted by his consistent calls and emails to what they were looking for.

“It was an odd quirk that when we did the digitizing of this story we only had the first half, since the negative was in two parts,” said Wilsbacher.

The clip was found in MIRC’s routine examination of unviewed films. Soon after its discovery, the footage was mailed to Mr. March, who positively identified it as what he knew had been there all along.

“I am delighted you found Rabbi Yisrael Meir Kagan pictured in the newly found footage,” wrote Mr. Singleton in an email to March. “It took years of sifting thousands of pieces of film to find this footage. Frankly, I did not expect to find more footage. In my experience, this almost never happens. You always believe more footage would be found in this giant haystack.”

Singleton reiterated his feelings to Hamodia, saying that “finding the film fragment showing the Chofetz Chaim after all these years was, in my view, a miracle.”

Hamodia did its best to identify each of the many Gedolei Yisrael portrayed in the film. However, we ask our loyal readers to help us in accurately identifying all of them.

This article appeared in print on page 4 of the February 25th, 2015 edition of Hamodia.

Remains of Mikveh Destroyed in Holocaust Discovered Near Auschwitz