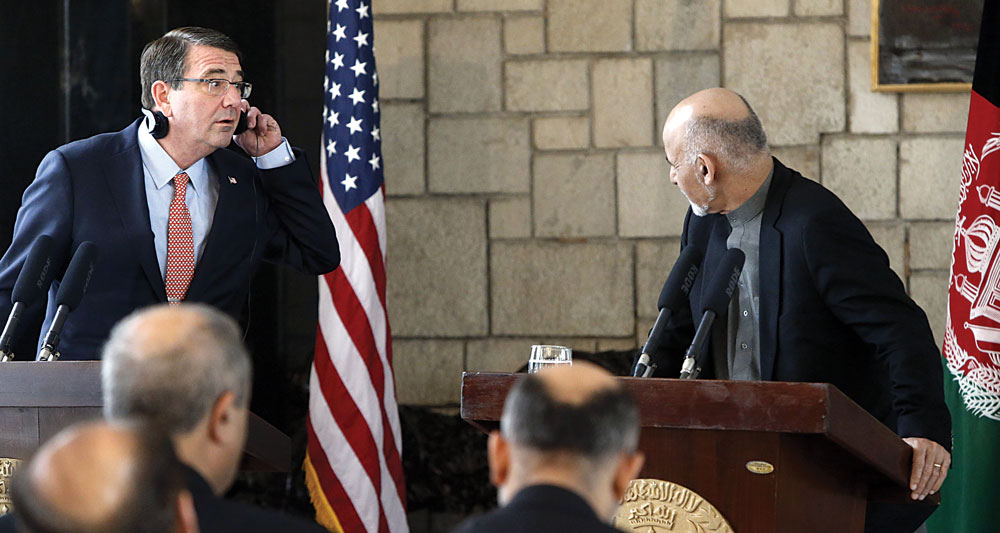 Ashton Carter used his first visit to Afghanistan as the new defense secretary to promise a broad review of the U.S.’s mission that could include a slower withdrawal of troops from America’s longest war.

After a meeting with Afghan President Ashraf Ghani in Kabul, Carter said the Obama administration is willing to reconsider its plan to pull out almost all U.S. forces by January 2017. Carter took over from former Defense Secretary Chuck Hagel four days earlier.

“Our priority now is to make sure this progress sticks,” Carter said, citing political and military gains by Afghanistan over the past two years. “That is why President Obama is considering a number of options to reinforce our support for President Ghani’s security strategy, including possible changes to the timeline for our drawdown of U.S. troops.”

The review reflects doubts about whether the Afghan military, undermined by factionalism and equipped with only rudimentary combat aircraft, can secure the country on its own. The U.S. has failed to root out Taliban insurgents after 13 years of war in which more than 2,300 Americans have died.

President Barack Obama’s timetable calls for reducing U.S. forces to about 5,500 troops by year-end, from about 10,000 now. Obama has pledged to bring home all but a small contingent of troops to guard the U.S. Embassy in Kabul by the time he leaves office in January 2017.

No decisions have been made on whether any changes should be made to Obama’s plan, which was announced last year. Ghani will discuss the issue of adequate troop levels with Obama on his visit to Washington next month, Carter said.

The reassessment “could mean taking another look at the timing and sequencing of base closures to ensure we have the right array of capabilities,” Carter said at a news conference with Ghani after their meeting. “We are discussing and rethinking details of a counterterrorism mission and how the environment has changed here,” he said, without elaborating.

Ghani said Obama deserved thanks for showing flexibility in his withdrawal plan — a step taken in December when Hagel announced that the U.S. would keep about 1,000 troops in Afghanistan longer than planned.

He also left the door open to possible talks with the Taliban.

“The grounds for peace have never been better in the last 36 years,” Ghani said, referring to decades of war that have plagued his country. “We cannot make premature announcements.”

Neighboring Pakistan has sought to serve as an intermediary in reviving long-dormant peace talks between Afghanistan’s government and the Taliban.