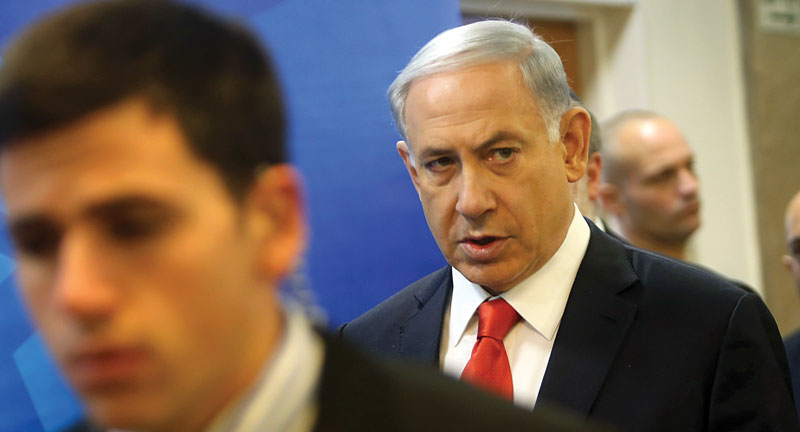 Israeli Prime Minister Binyamin Netanyahu continued his campaign to thwart the emerging nuclear deal with Iran on Sunday, as he rebuked the international community for ignoring Iran’s role in global terrorism.

At Sunday’s cabinet meeting, Netanyahu said that Iran “continues it’s murderous terror activities around the region and it does not, unfortunately, bother the international community which is continuing to talk with Iran about a nuclear accord that will enable it to build industrial capabilities to develop nuclear arms.”

Netanyahu’s comments came as Secretary of State John Kerry was about to resume  talks on Sunday in Geneva with Iranian Foreign Minister Mohammad Javad Zarif.

Netanyahu said that it was “astonishing” that after the International Atomic Energy Agency (IAEA) published a report last week that revealed Iran was still concealing military elements of its nuclear program, that the talks will proceed regardless.

“Not only are they continuing,” Netanyahu said of the talks, “but there is an intensive effort to reach a nuclear agreement in the coming days and weeks.”

The prime minister reiterated his intention to address Congress on the Iran issue on March 3, in view of the possibility that a “framework agreement” might soon be signed “that will threaten our existence.”

Meanwhile, in Washington, the White House was extending what The Associated Press referred to as “an unwelcome mat.”

The Obama administration is reportedly considering a range of options to counter the effect of the Netanyahu speech, which it sees as undermining its efforts at negotiating an agreement with Iran.

Among them: sending Cabinet members abroad during the Israeli leader’s visit, a presidential interview with a prominent journalist known for coverage of the rift between Obama and Netanyahu, multiple interview appearances by senior national security aides to rebut criticism of the Iran deal, and a snub of AIPAC, which is holding its annual meeting while Netanyahu is in Washington.

A lower-ranking official than normal may be assigned to represent the administration at the annual AIPAC (American Israel Public Affairs Committee) meeting, the officials said.

An AIPAC official said Friday that the group has not yet received any reply to its invitation for senior administration figures to attend the meeting that starts March 1. The official stressed last-minute RSVPs are not unusual, but the White House has been signaling for some time that a Cabinet-level guest may not be coming.

Vice-President Joe Biden and Secretary of State John Kerry, who have both previously addressed AIPAC, will be traveling abroad. Biden will be visiting Uruguay and Guatemala on a trip that was announced after Netanyahu’s speech was scheduled, while the State Department announced abruptly this past week that Kerry will be traveling to as-yet-determined destinations for the duration of the AIPAC conference.

A White House source denied that the administration was out to snub AIPAC, and blamed Netanyahu supporters for fabricating the rumor in order to make it appear that they are acting in a hostile manner to the leading Jewish lobby, as well.

A suggestion that President Barack Obama himself give an Iran-related address to counter Netanyahu has apparently been shelved.

On the other side of the rift, senior Democratic Senator Charles Schumer has called on his fellow Democrats to attend Netanyahu’s speech, saying the Israel-U.S. relationship should “transcend” any political differences.

“It’s always been a bipartisan policy,” Schumer said. “Democrats and Republicans have always worked together on it, we ought to keep it that way.”