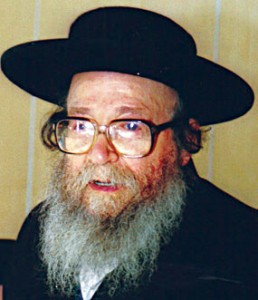 On Motzoei Shabbos, Klal Yisrael, and Yerushalayim in particular, was pitched into mourning by news of the petirah of Harav Levi Rabinovitch zt”l, one of the celebrated poskim of the holy city and the author of the renowned sefarim; Maadaneh Hashulchan and responsa Maadaneh Malachim. He was 95 years old.

Harav Rabinovitch was born in 1920 in Tzfas. His father, Harav Gamliel, zt”l, was a talmid chacham of note, who served as Rosh Yeshivah in Kishivev, in present-day Moldova, and as the posek in the court of Harav Dovid Moshe Freidman zt”l, the Rebbe of Chortkov. The family, originally called Rappaport, were members of a dynasty of Kohanim, tracing its lineage back to the Shach.

Sensing increasing danger in Europe, the Rabinovitchs, relocated to Eretz Yisrael. Sadly, Rav Gamliel was niftar shortly after the move. Young Levi, who was only nine years old at the time, was forced to take up residence at the Diskin Orphanage in Yerushalayim. A bright streak in this difficult time was that the situation afforded him a special closeness to Hagaon Harav Yosef Chaim Sonnenfeld, zt”l, Rav of Yerushalayim, who spent his summers in the orphanage. For several of these summers, Rav Rabinovitch merited to act as the Gaon’s personal attendant.

He studied for many years in Yeshivas Torah v’Yirah, where he quickly gained a reputation for his phenomenal diligence in Torah study and yiras Shamayim. During this period, Rav Rabinovitch forged close ties to many of the Gedolim of old Yerushalayim, including Hagaon Harav Reuven Bengis, zt”l. As news of his exceptional Torah knowledge spread, he became an address for an increasing amount of halachic inquiries from near and far.

In his work, Maadandeh Hashulchan, Rav Rabinovitch wrote summaries of the glosses of the Taz and Shach in Shulchan Aruch Yoreh De’ah. Over the years, the sefer has become increasingly popular among scholars for its amazing clarity and brevity. The author, a picture of toil in Torah study, often said that he did not want in any way for his Maadaneh Hashulchan to discourage people from properly analyzing original sources, but felt that such a work would be a welcome aid to the challenging task of mastering of Yoreh De’ah.

The niftar was known to encourage visitors to commit selections of Mishnayos and other divrei Torah to memory in order to fulfill the Torah’s injunction to study while one “goes on the way.” Rav Rabinovitch was noted for his careful observance of shemiras halashon and was extremely careful whenever speaking about fellow Jews. He was a strong proponent of the study of the sefer Chofetz Chaim on the laws of lashon hara.

This past Shabbos around midday, Rav Rabinovitch requested a glass of water and after pronouncing a brachah of Shehakol returned his soul to its Maker.

This article appeared in print on page 7 of the February 23rd, 2015 edition of Hamodia.