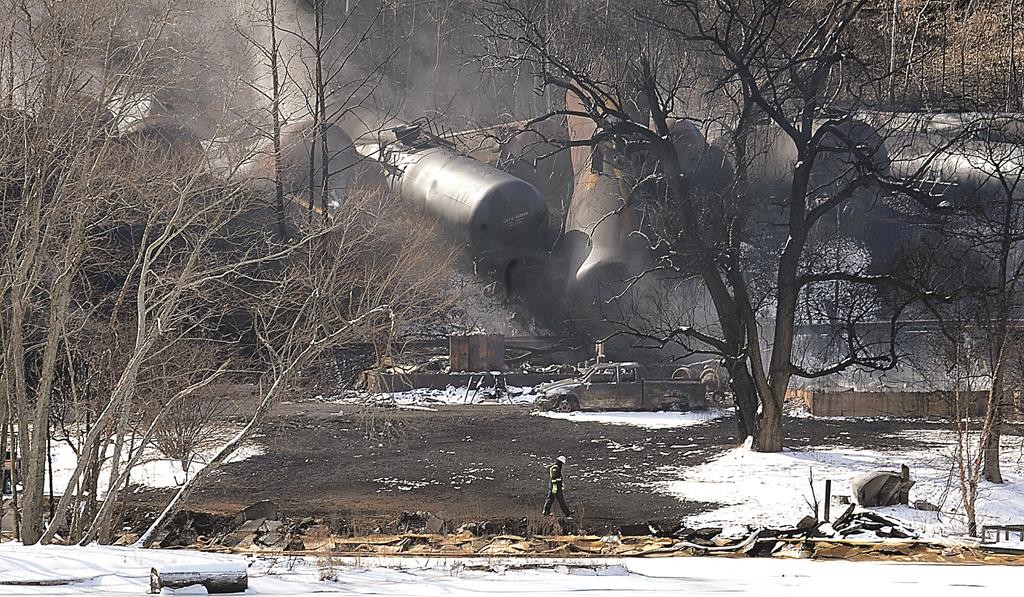 Oil from North Dakota’s shale fields was still burning in West Virginia a day after a train carrying more than 3 million gallons of crude derailed in a snowstorm, shooting fireballs into the sky.

Hundreds of families were evacuated and nearby water treatment plants were temporarily shut down after 19 tanker cars left the tracks and caught fire, leaking oil into a Kanawha River tributary and burning a nearby house down to its foundation.

“There’s nothing there,” said Democratic U.S. Sen. Joe Manchin, who toured the scene. “All you can see is a couple of blocks sticking out of the ground. There’s some pickup trucks out front completely burned to the ground.”

One person — the homeowner — was treated for smoke inhalation, but no other injuries were reported, according to the train company, CSX. The two-person crew, an engineer and conductor, managed to decouple the train’s engines from the wreck behind it and walk away unharmed.

The train derailed near unincorporated Mount Carbon, two miles after passing through Montgomery, a town of 1,946, on a stretch where the rails wind along a narrow flood plain, past businesses and homes that crowd the bases of steep, tree-covered hills.

Fire crews had little choice Tuesday but to let the tanks burn themselves out. Each carries up to 30,000 gallons of crude.

Rail shipments of crude have increased from 9,500 carloads in 2008 to more than 435,000 in 2013, driven by a boom in the Bakken oil patch of North Dakota and Montana. Limited pipeline capacity there forces about 70 percent of the crude to reach refineries by rail, according to American Fuel and Petrochemical Manufacturers.

The downside: Trains hauling Bakken-region oil have been involved in major accidents in Virginia, North Dakota, Oklahoma, Alabama and Lac-Megantic, Quebec, where 47 people were killed by an explosive derailment in 2013. Reports of oil leaking from railroad tank cars also are increasing, from 12 in 2008 to 186 last year, according to Department of Transportation records reviewed by The Associated Press.

This train was bound for an oil shipping depot in Yorktown, Virginia, using model 1232 tank cars, which include safety upgrades voluntarily adopted by the industry four years ago. An estimated $7 billion has been spent to put 57,000 of these cars into service, according to the Railway Supply Institute.

But a similar accident, also involving model 1232s, happened along the same route in Lynchburg, Virginia, last year. It was one of a series of ruptures and fires that prompted the Obama Administration to consider requiring upgrades such as thicker tanks, shields to prevent tankers from crumpling, rollover protections and electronic brakes that could make cars stop simultaneously, rather than slam into each other.

Some of these measures would cost billions more and have been strongly opposed by the oil and rail industries.

The National Transportation Safety Board said Tuesday that its investigators are looking at detailed damage reports and photographs of the derailed tank cars provided by CSX and the Federal Railroad Administration. Investigators will compare the data with tank car design specifications and similar derailments, including one near Casselton, N.D., when a train over 100 cars long created a huge fireball that forced the evacuation of the farming town, and the accident that sent three tank cars plunging into the James River, prompting an evacuation in downtown Lynchburg.

“This accident is another reminder of the need to improve the safety of transporting hazardous materials by rail,” said Christopher Hart, NTSB’s acting chairman.

Snow was falling heavily Monday — as much as 7 inches in some places — but it’s not clear if the weather contributed to the derailment, which happened about 30 miles southeast of Charleston.