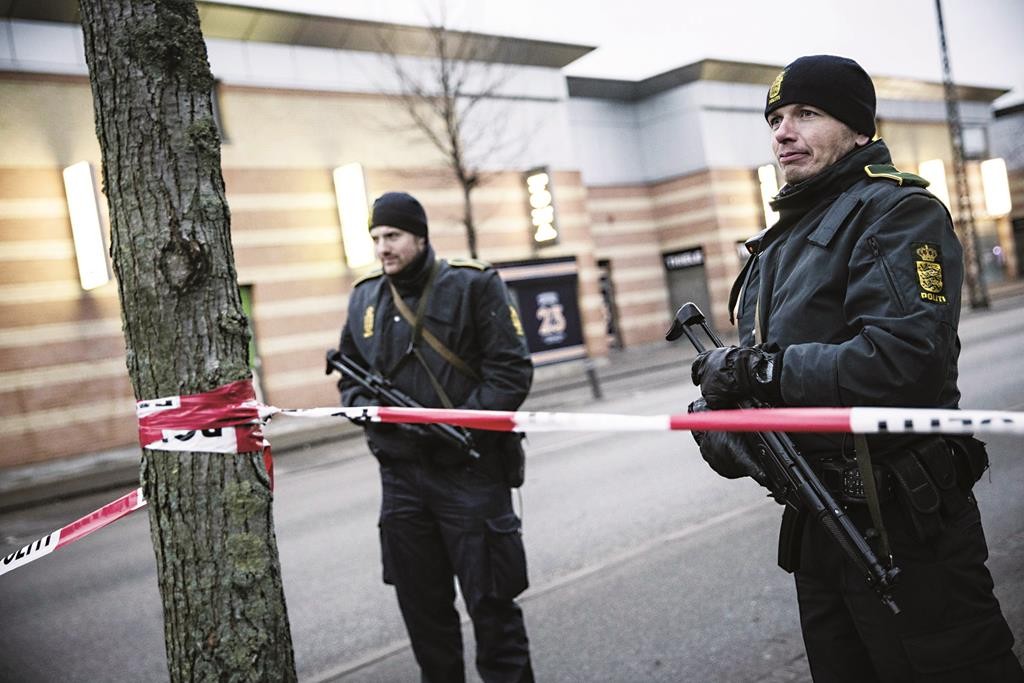 In a terror attack that sent shock waves through Denmark and the world, a terrorist murdered Dan Uzan, Hy”d, the beloved guard of Copenhagen’s Great Synagogue. Danish police later killed the terrorist, who had earlier murdered a man at a free speech event. Five police officers were also wounded in the attacks.

A gunman who authorities said was behind the attacks was later killed in a shootout with police, who said it appears that he had been acting alone.

Police have not officially released the identity of the shooter, but sources have identified him as Omar Abdel Hamid El-Hussein. Authorities continue to search for suspected accomplices.

Just after midnight Motzoei Shabbos, the gunman opened fire outside the Great Synagogue in central Copenhagen, killing Dan Uzan, 38, Hy”d, who was helping guard a building adjacent to the synagogue where more than 80 people were attending a bas mitzvah celebration. Two police officers were wounded in the attack; the gunman fled on foot before being killed by police in a shootout at a train station nearby.

“People are very shocked and scared; everybody in the community knew him. It is difficult to believe that something like this could happen in a peaceful country like Denmark,” Rabbi Yitzi Loewenthal, director of Chabad of Copenhagen, told Hamodia. “At the same time, there is a determination to not let this destroy who we are.”

Rabbi Loewenthal said that there was a heavy police presence in the city, with machine-gun armed officers guarding Jewish institutions. Several shuls had canceled services for the day and Copenhagen’s Jewish day school was scheduled to be closed Monday morning in light of the security situation.

“Jews have always felt safe here and there is a very good relationship between the Jewish community and the government. There were hundreds of people earlier coming to the shul to show support. It was very moving,” said Rabbi Loewenthal. “We feel that the government is committed to protecting the community, but in this case they already were doing all that they could and this still happened.”

The first shooting happened shortly before 4 p.m. on Shabbos. Danish police said the gunman used an automatic weapon to shoot through the windows of the Krudttonden cultural center during a panel discussion on freedom of expression following the Paris attacks. A 55-year-old man attending the event was killed, while three police officers were wounded. Two belonged to the Danish security service PET, which said the circumstances surrounding the shooting “indicate that we are talking about a terror attack.”

The gunman then fled in a carjacked Volkswagen Polo that was found later a few kilometers away, police said.

After searching for hours, police reported the second shooting in downtown Copenhagen after midnight Sunday. Copenhagen police spokesman Allan Teddy Wadsworth-Hansen said that the gunman opened fire at two police officers outside the shul. They were wounded in the arms and legs but were not in life-threatening condition, while a civilian man was killed. The gunman fled on foot.

Wadsworth-Hansen said officers were posted outside the synagogue when “a person came up and started to shoot.” That was followed by a succession of six or seven gunshots, he added.

“Within a minute or so, armed police were on the scene, a helicopter was hovering overhead,” reported Pete Milnes, a cameraman for Sky News. Twenty to 30 police officers with assault rifles arrived at the scene, shouting at residents to stay indoors and close all windows.

Danish Prime Minister Helle Thorning-Schmidt visited the synagogue following yesterday’s attacks and said, “We will do everything we can to protect our Jewish community.”

Sebastian Zepeda, a 19-year-old visitor from London, said he didn’t want to leave his hotel room after hearing of the first shooting, when the second shooting happened on the street below.

“I was on my bed and I heard gunshots. And my heart raced,” Zepeda said. “All of a sudden the road was packed with police.”

Witnesses in an establishment across the street from the shul said they saw special police teams moving in with automatic rifles.

“We looked out the window and saw this guy lying on the street,” said Rasmus Thau Riddersholm, 33. “We were told by police to stay in the back of the room, away from the windows and doors.”

The terrorist had been on the radar of security officials and may have been inspired by the events that took place in Paris, according to Jens Madsen of Denmark’s Security and Intelligence Service. A terrorist killed four Jewish men and held dozens hostage at a kosher supermarket in Paris last month. Two days earlier, two brothers shot and killed 12 people at the satirical magazine Charlie Hebdo.

The Copenhagen gunman may “generally have been inspired by militant Islamist propaganda issued by IS [Islamic State] and other terror organizations,” said Madsen, who added that police have not yet ascertained if the man had traveled to conflict zones, “including Syria and Iraq,” but Madsen said it was at “the absolute center of investigations.”

Lars Vilks, a Swedish artist who has faced numerous death threats for caricaturing the founder of Islam, was one of the main speakers at the event, titled “Art, Blasphemy and Freedom of Expression.” He was whisked away by his bodyguards, unharmed, as the shooting began.

Vilks, 68, later told the Associated Press he believed he was the intended target of the shooting.

“What other motive could there be? It’s possible it was inspired by Charlie Hebdo,” he said, referring to the Jan. 7 attack by Islamic extremists on the French newspaper that had angered Muslims by lampooning the founder of Islam.

Police initially said there were two gunmen at the cultural center but later said they believed there was only one shooter. They described him as 25 to 30 years old with an athletic build and carrying a black automatic weapon. They released a blurred photograph of the suspect wearing dark clothes and a scarf covering part of his face.

“I saw a masked man running past,” said Helle Merete Brix, one of the event’s organizers. “I clearly consider this as an attack on Lars Vilks.”

Visiting the scene of the first shooting, Danish Prime Minister Helle Thorning-Schmidt called it a “political attack and therefore an act of terror.”

Leaders across Europe condemned the violence and expressed support for Denmark. Sweden’s security service said it was sharing information with its Danish counterpart, while U.S. National Security Council spokeswoman Bernadette Meehan said U.S. officials were ready to help with the investigation and have been in touch with their Danish counterparts.

“We have gotten a lot of political support from the government, but of course there is a lot of shock and fear after such an event,” Rabbi Pinchas Goldschmidt of the European Conference of Rabbis told Hamodia. “Europe has thousands of Jihadists returning from Syria and Iraq who are walking time bombs. There is definitely enough technology and manpower to monitor [them] and make sure that those elements do not become a menace. Both in Copenhagen and in Paris the people [who committed terrorist acts] were already under police investigation. What is needed in more commitment to controlling the situation.”

(With reporting from Chabad.org)