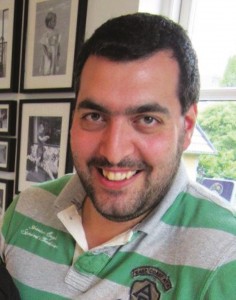 “I can’t explain what an amazing guy he was. He was not a man of ideology, but someone who did what he did because it was the right thing to do,” said Rabbi Yair Melchior. “He was always there for the community, without bragging. Everyone admired him and learned, not from his words, but from his actions. You rarely find such people.”

The 38-year-old Uzan was on duty when he was shot to death early Sunday while guarding a building behind the synagogue. His service as guard for Copenhagen’s main shul was done on a purely voluntary basis. Mr. Uzan possessed a master’s degree in economics and worked for a local corporation.

“People are very sad; he was very well known and well liked,” Rabbi Yitzi Loewenthal, director of Chabad of Copenhagen, told Hamodia. “He stood at the doors of the main shul for years. He was a big fellow and I remember thinking to myself when I came to the bas mitzvah earlier that night that he made me feel safe.”

Uzan was born in the small but historic Copenhangen community, attending its Day School and taking an active role in local security efforts from a young age.

He had wanted younger members to replace him in the security detail, Rabbi Melchior said, but the community kept asking him to serve as a guard.

“I have known Dan since he was eight days old. I was his mohel and his teacher,” said former Chief Rabbi Bent Lexner, emotionally. “I was the one to tell his parents the horrible news. He has been guarding our synagogue for over 15 years; everyone knew him.”

This article appeared in print on page 10 of the February 18th, 2015 edition of Hamodia.