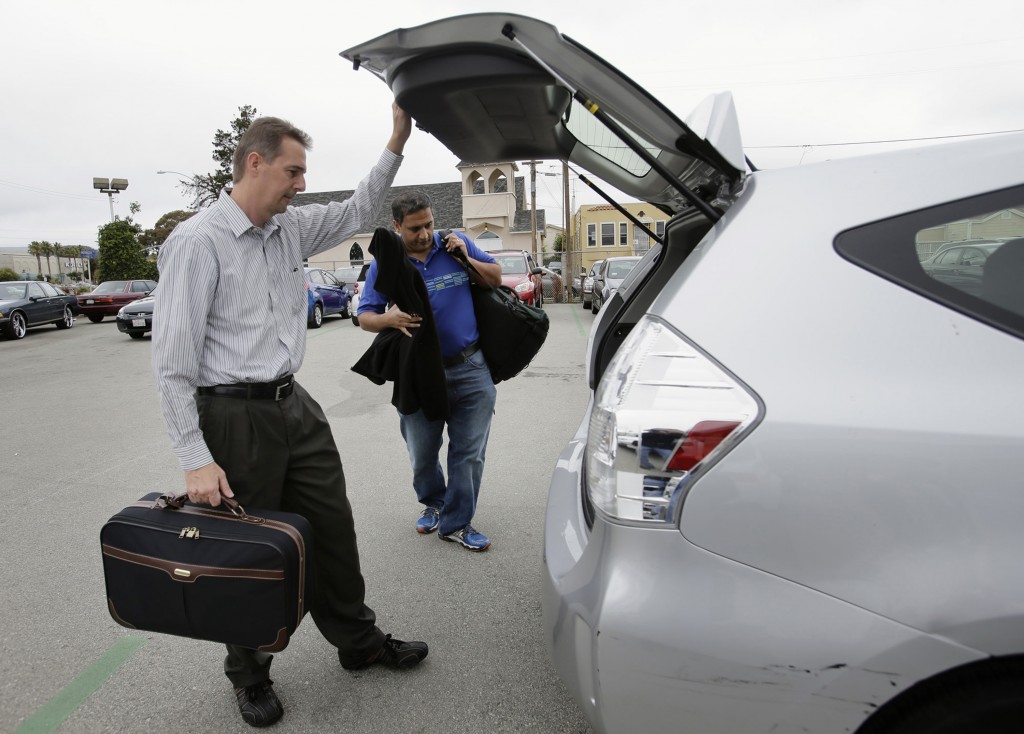 Parking a car at the airport can be a money drain for travelers — the vehicle sits there idly while the driver shells out $15 or $20 a day.

Enter FlightCar, a San Francisco startup that gives travelers free parking near the airport and, instead of just letting the car sit there idly, rents it to other travelers passing through. Think of it as Airbnb for cars.

FlightCar recently began offering its services at Mineta San Jose International Airport, giving travelers who are flying out of San Jose an alternative to the $15-a-day parking fee, and those flying into the city an alternative to traditional car-rental services. FlightCar delivers and picks you up from the airport.

Petrovic and co-founder and CEO Rujul Zaparde — both age 20 and Ivy League dropouts — say they are tapping into the blossoming tech sector of companies that make apps and websites that allow people to loan or sell their personal belongings — their apartment, clothes, car or baby items — to someone else for a fee. Such companies include Airbnb, Poshmark, Getaround, Thredup and dozens of others.

“More people are going to have extra assets that they may not need and are willing to share it, and other people are willing to rent it at the right price,” said Hans Tung, managing partner at GGV Capital, which led a $13.5 million financing round for FlightCar last year. “It is good for the economy overall and it’s good for the individual.”

FlightCar works like this: Sign up through the website (the mobile app is still in development) and, if your car meets their criteria — not more than 150,000 miles, not older than 14 years — park it at one of their lots for free during your trip.

“It gives customers using our airport other options for both renting cars and parking personal vehicles, so we were happy to work with them,” said Rosemary Barnes, airport spokeswoman.

FlightCar car rentals average about $25 to $30 a day — about half or less than the daily rate of an economy car from Hertz or Dollar rental companies at San Jose Airport — but vary depending on location and the season. The service is now at 10 airports, including San Francisco and Oakland, and has 50,000 members on its site.

Car owners who leave their cars with FlightCar can make 5 to 20 cents per mile driven by a renter, and FlightCar keeps the rest of the rental fee. Not all cars are rented — the older clunkers often sit idle — but FlightCar lets all cars park for free regardless. Renters aren’t supposed to drive the car more than 225 miles, and if they do, they face a surcharge of 45 cents a mile, 40 cents of which goes to the car owner.

“Not only do I get free parking, but sometimes I get a little bonus,” said Carol Young, who began using FlightCar in 2013 for her trips out of San Francisco Airport. Young flies about eight times a year for work; she makes about $20 to $80 each time she leaves her new Honda Element behind.

FlightCar cleans the car before and after it is rented, so “there is no hint of the fact someone was even ever in there,” she said.

Still, the thought of some stranger driving your personal vehicle while you’re across the country may not sit well with everyone, Young said. She said some of her friends were repulsed by the idea.

“It just depends on your personality,” she said.