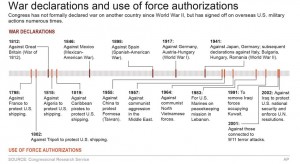 Nothing underscored the yawning divide between the two parties than Obama’s request to bar “enduring offensive combat operations” from the struggle against terrorists who have seized territory in Syria and Iraq and beheaded hostages.

But Pelosi, recalling the long, difficult war in Iraq, said the president “has to be commended” for proposing to limit his own power.

Obama is seeking a three-year authorization for the use of force against the Islamic State terrorists or any successor groups, without regard to international boundaries. His proposal would leave in place 2001 legislation approving military action against al-Qaida following the terror attacks of 9/11.

As for ground combat operations, Obama says he does want flexibility allowing rescue missions, intelligence collection and the use of special operations forces in possible military action against Islamic State leaders.

Failure to pass any legislation would mark a significant political defeat for Obama, with unpredictable consequences overseas at a time of expansive terrorist threats, a confrontation between the West and Russia over Ukraine and international negotiations with Iran over its nuclear program.

Boehner was among several Republicans who said the president’s plan wasn’t up to the job of defeating Islamic State forces.

“I want to give our military commanders the flexibility and the authority that they need to defeat our enemies,” he said. “And that’s exactly what Republicans will make the case for as we move through rigorous hearings and oversight on this issue.”

This article appeared in print on page 2 of the February 13th, 2015 edition of Hamodia.