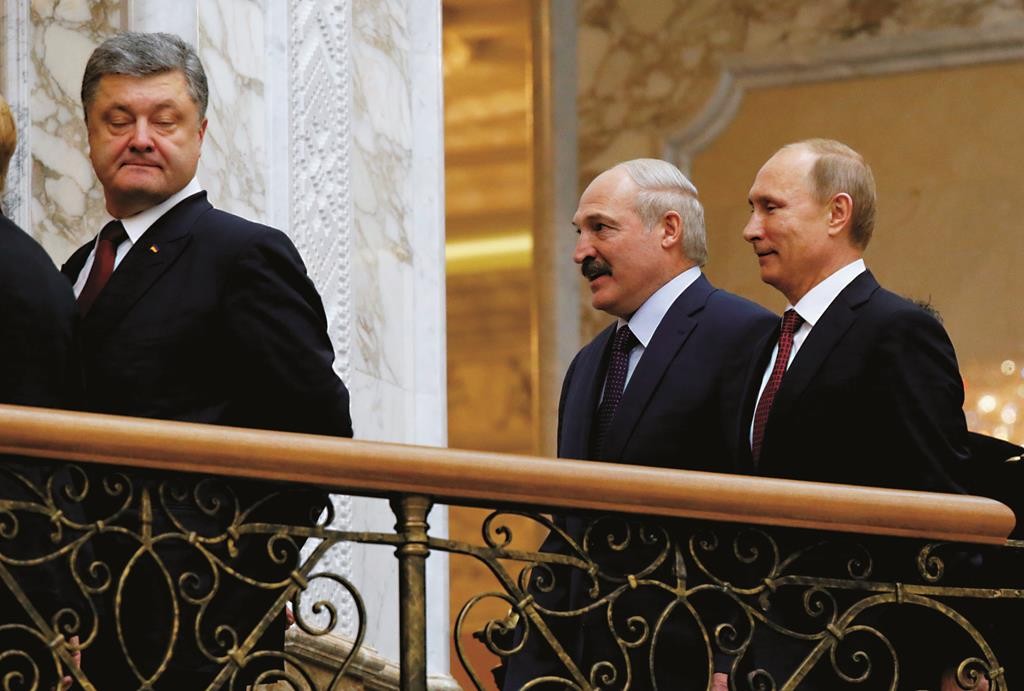 The leaders of France, Germany, Russia and Ukraine engaged in crucial peace talks Wednesday in the Belarusian capital as fighting still raged in eastern Ukraine.

The talks, brokered by German Chancellor Angela Merkel and French President Francois Hollande, aim to negotiate a deal to end the hostilities between Ukrainian troops and Russian-backed separatists that have killed more 5,300 people since April.

In a diplomatic blitz that began last week, Merkel and Hollande visited Kiev and Moscow to speak to Ukrainian President Petro Poroshenko and Russian President Vladimir Putin, paving the way for the talks in Minsk.

“The entire world is waiting to see whether the situation moves toward de-escalation, weapons pullback, cease-fire or … spins out of control,” Poroshenko said upon arriving.

After talking in private for several hours, the four leaders briefly posed for photographers and went into a broader meeting involving senior officials. Putin and Poroshenko shook hands before the talks.

Russia’s ambassador to Belarus, Alexander Surikov, told The Associated Press that “some progress has been made,” but wouldn’t offer any details.

Details of a possible peace deal haven’t been released but some of the key sticking points at the talks include:

• Drawing a new line of division: Ukraine wants the same one that was agreed upon in September, while Russia wants a new line that reflects the rebels’ significant territorial gains since then.

• Withdrawing Russian troops and equipment from eastern Ukraine: Russia says it does not have any troops and military hardware in the east, a stance scoffed at by Ukraine and NATO.

• Securing the Ukraine-Russian border: Ukraine wants to get control back over its border with Russia to stem the flow of Russian fighters and weapons, while Russia says that’s up to the rebels who have captured some key border posts.

• Giving the separatists more autonomy: Ukraine says it may offer them broad rights under Ukrainian law but Russia wants guarantees. Russia also wants Ukraine to end its financial blockade of the east.

European leaders have warned there’s no guarantee a deal will be reached Wednesday with Moscow, which the West says is fueling the insurgency.

Hopes for a breakthrough appear slim and would depend on Ukraine making most of the concessions, with advancing rebels unlikely to agree to halt and go back to previous positions.

Still, Moscow expressed optimism. A Russian diplomatic source said it was 70 percent likely that an agreement would be reached.

Meanwhile, Ukraine’s army said 19 of its soldiers were killed in pro-Russian separatist assaults near the railway town of Debaltseve, some of the worst losses it has reported in nine months of war.

A surge in fighting in the 24 hours before the summit, including a rocket attack that killed 17 people in Ukrainian-held territory on Tuesday, could be intended to force Ukraine to accept a deal recognizing the rebel advance.