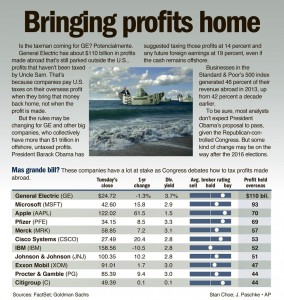 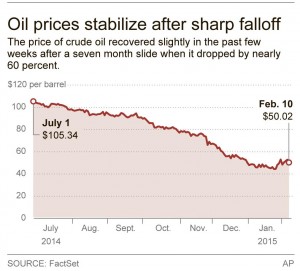 A mix of positive earnings and corporate news boosted stocks on Tuesday. Signs that Greece might be willing to broker a deal with its creditors also gave the market a lift.

Coca-Cola rose after the company reported a better-than-expected quarterly profit. General Motors gained after an activist investor said he would seek a seat on the company’s board and push for a stock buyback. Apple passed another milestone, becoming the first U.S. company to be valued at more than $700 billion.

Stock investors have had a bumpy ride since the start of the year.

The market slumped in January as the ongoing drop in oil prices hit energy stocks and amid worries about the prospects for global growth. Stocks have bounced back in February as energy stocks rose from their lows and on signs that the U.S. economy is maintaining its recovery. On Tuesday, stocks logged a solid gain even after a big drop in oil prices pushed the energy sector lower.

“The economic data is coming in okay, and when you delve into the big picture of the earnings reports, they’re not bad,” said Robert Pavlik, Chief Investment Strategist at Boston Private Wealth. “People want to be in the market when it starts to go back up.”

Investors were encouraged by signs that a deal could be reached between Greece and its lenders. The nation’s new prime minister voiced confidence Monday that a compromise can be reached at high-stakes meetings in coming days.

Greece’s stocks and bonds have taken a drubbing this year after the radical left-led government renewed a pledge to seek debt forgiveness and dubbed the country’s rescue package, with its conditions of strict austerity, a “toxic fantasy.”

“There’s a growing sense that the two sides in the negotiations may be moving toward some compromise,” said Quincy Krosby, a market strategist at Prudential Financial.

Energy stocks took a hit on Tuesday after the International Energy Agency said that the recent rebound in oil prices “will be comparatively limited in scope.” Analysts at Citigroup said the upturn is likely to prove short-lived and predicted that rising inventory costs could push the price as low as $20 a barrel.

Among individual stocks, Coca-Cola was one of the day’s winners after reporting a better-than-expected quarterly profit. The company trimmed costs and fetched higher prices for its drinks in North America.

The world’s biggest beverage maker has been struggling to boost global sales amid tepid growth overseas and a shift away from soda back at home. The company’s stock rose $1.17, or 2.8 percent, to $42.40.

Apple said it would spend $850 million on a massive solar energy project that will generate enough power for the computer giant’s new office campus and its other California operations. First Solar, which is building the facility, jumped $2.21, or 5 percent, to $48.54. Apple’s own stock rose $2.30, or 2 percent, to $122.02. With the gain, Apple’s market value rose to $710 billion.

General Motors rose after Harry Wilson, a former hedge fund manager and one-time member of the Obama administration’s task force that helped to restructure GM and Chrysler in 2009, said he’ll seek a seat on GM’s board at the automaker’s annual meeting this summer and will push for an $8 billion stock buyback to take place next year. Wilson is acting with the backing of a variety of hedge funds.

U.S. government bond prices were little changed. The yield on the benchmark Treasury note was flat at 1.98 percent.

This article appeared in print on page 36 of the February 11th, 2015 edition of Hamodia.