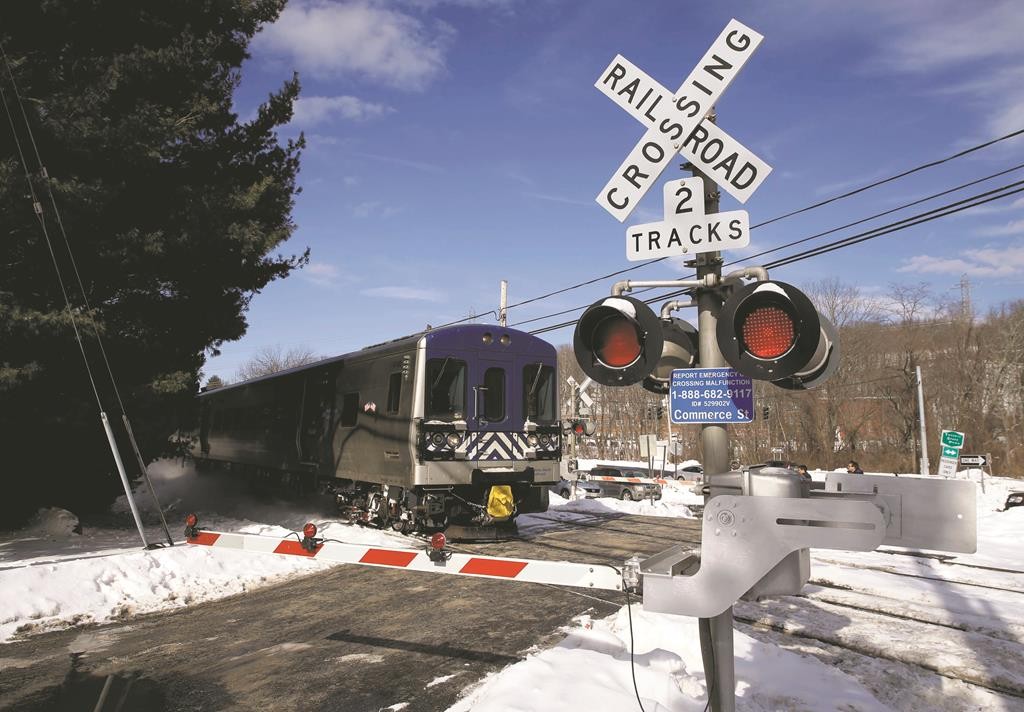 The Westchester County rail crossing made Nicole Sanders anxious even before she witnessed last week’s fiery fatal collision between a commuter train and a sport- utility vehicle.

“There are a whole lot of moving parts for the driver to consider,” said Sanders, who watched the conflagration from a window across the street at Ladimax Sports and Fitness, where she is a personal trainer. “It’s not a good intersection to have a train track.”

About two car lengths east of the tracks in Valhalla, N.Y., Commerce Street crosses the Taconic State Parkway at an awkward angle. Poor lighting and traffic that backs up during the evening rush can make the crossing confusing, said Sanders.

Even so, about 1,000 cars make their way across the tracks daily, according to the Federal Railroad Administration. The 3.1 percent probability of a crash there makes the site the 17th most dangerous of 86 Metro-North Railroad grade crossings, according to the agency.

The collision late last Tuesday, the deadliest in Metro-North history, killed six, including the driver of a Mercedes-Benz SUV that was hit by the commuter train. It was the first at the Commerce Street crossing since 1984, federal records show.

Federal investigators began to compile a better picture of what happened that night, but said it will take much longer to understand just how the SUV ended up in the path of speeding train.

What they do know is that traffic lights and warnings designed to keep the intersection clear of cars appeared to have operated properly.

The engineer activated the emergency brake and blared the horn in the seconds before impact. The SUV’s driver, Ellen Brody, a 49-year-old mother of three, was killed, as were five people on the train.

The state Transportation Department hasn’t received complaints about the crossing in at least 10 years.

The driver directly behind Brody’s SUV told federal investigators that the woman in that vehicle had to stop on or near the tracks because heavy traffic caused by a nearby accident was “inching along,” Sumwalt said.

The witness tried motioning to Brody to back up, he told investigators. Instead, Brody got back in her car, paused for a moment and then drove into the oncoming train.

The collision, the railroad’s sixth accident at a road crossing in less than four years, is raising questions about whether more should be done to make them safer. Road and rail intersections are difficult to guard, and the time it takes for a train to stop makes it almost impossible for an engineer to hit the brakes in time to avert a collision.

Brody was heading home to Scarsdale, New York, from her job at ICD Contemporary Jewelry in Chappaqua, said Varda Singer, owner of the shop. She left around 5:30 p.m. for the 13-mile drive south, which takes about 30 minutes when there’s little traffic.

About five minutes before Brody left, a driver headed south on the Taconic was texting and drifted into the left lane, striking a northbound vehicle less than a mile south of the Commerce Street crossing. The crash shut down the Taconic in both directions and caused a traffic jam all the way to Commerce Street.

The impact from the Feb. 3 collision created a fireball in the freezing night that engulfed the first train car as the Mercedes was pushed down the tracks. It took the train about 950 feet to stop after the engineer activated the emergency brakes.

Westchester County Executive Rob Astorino said he goes through the crossing every morning.

“It’s a dangerous intersection,” Astorino said. “It’s confusing because people coming across the tracks are trying to go straight across the parkway, and it’s not straight.”

The design of the electrified third rail is another area investigators are examining, Sumwalt said. The rail, which sits above the ground on the left side of the track, has a unique design on Metro-North, he said.

About 400 feet of the third rail penetrated the SUV and then entered the train’s first car, depositing the steel bars in 80 foot sections.

“The rail car is going through, kind of sucking these things up, just one by one by one,” said Robert Sumwalt, a member of the National Transportation Safety Board. “I counted about a half dozen of those that were just being inhaled as the train car goes down the track.”