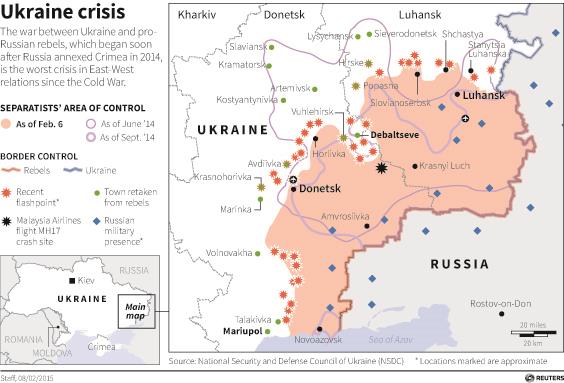 The aim is to revive the much-violated peace plan both sides agreed to in Minsk last September, and end a war that has now killed more than 5,300 people according to United Nations estimates.

Although the United States won’t be at the negotiating table, a growing clamor in Washington to arm Ukraine will be on the minds of those present in Minsk. U.S. officials have said President Barack Obama is rethinking his previous opposition to sending weapons to Ukraine, despite fears of triggering a proxy war between Washington and Moscow.

While senior diplomats from the four countries meet in Berlin to prepare for the summit, Merkel is expected to brief U.S. officials in Washington on Monday during a previously scheduled trip.

“It’s a fortuitous coincidence that Merkel is going to Washington and whatever she does, Obama will be informed,” said Volker Perthes, director of the German Institute for International and Security Affairs. The threat of U.S. arms shipments won’t harm the talks, he added, although “if the diplomatic efforts fail then the option to ship arms becomes more likely.”

U.S. Secretary of State John Kerry was keen Sunday to dispel the notion of a trans-Atlantic rift, saying U.S. and its European allies are “united in our diplomacy” on Ukraine. Speaking at an international security conference in Munich, he said the U.S. supports the efforts by France and Germany.

“There is no division, there is no split,” Kerry said. “I keep hearing people trying to create one. We are united, we are working closely together.”