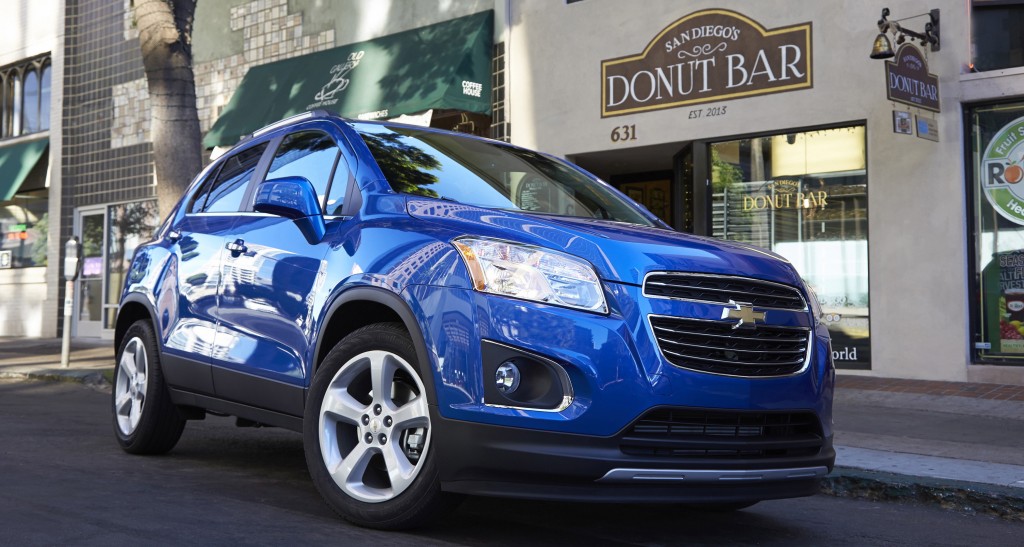 Automakers are accommodating that demand with vehicles such as the all-new Chevrolet Trax, which joined the lineup of General Motors’ volume brand for 2015.

This little charmer combines fuel efficiency with a good measure of styling and utility, then adds a measure of driving fun, as well — thanks to its peppy 1.4-liter turbo gasoline engine.

Overall, the Trax is about the same size and general shape of the discontinued Chevrolet HHR, which went away in 2011 when the Cruze replaced the Cobalt as Chevy’s compact car.

The HHR — which was Chevy’s answer to the also now-discontinued Chrysler PT Cruiser — was the smallest crossover utility vehicle in the brand’s lineup. And with the next step up being the midsize Equinox, the brand had a big gap in its lineup without the HHR.

As I have an HHR of my own, I found lots of parallels between that vehicle and the new Trax when I tested the midlevel LT model recently. Although the cargo area behind the rear seat is a bit smaller than that of my HHR, the interiors of the two vehicles are quite similarly sized, with adequate space for four adults, and even five if necessary, in both cars.

GM already has a version of the Trax in its Buick lineup – the Encore, which arrived for 2014. It has more features and is a bit more upscale, and costs more, as well. Encore prices range from $24,065-$30,935, but a lot of the specs are the same, including the engine and transmission, and the fuel economy.

Trax is somewhat heavier than the Sonic, as well. Base curb weight of the Sonic hatchback is 2,690 pounds, while the front-wheel-drive version of the Trax weighs 2,805 pounds, and the all-wheel-drive model 3,208 pounds.

The Sonic has a slight edge on cargo space. With the Trax, there is 18.7 cubic feet of space behind the rear seat, compared with 19 cubic feet for the Sonic. Both have more cargo capacity than most midsize sedans. And with the rear seat folded, the Trax can accommodate 48.4 cubic feet of cargo.

Under the hood of the Trax and its Buick counterpart is the same turbocharged 1.4-liter inline four-cylinder engine, rated at 138 horsepower and 148 foot-pounds of torque. It’s connected to a six-speed automatic transmission.

That gave me plenty of power to cruise along the interstate highways with the traffic flowing at 80-plus mph. There was never any indication that this car was the least bit underpowered.

In the Trax, this engine gives the vehicle Environmental Protection Agency ratings of 26 mpg city/34 highway with front drive, and 24/31 with all-wheel drive. That’s quite an improvement over the ratings of midsize crossovers such as the Toyota Highlander, with 20 mpg city/25 highway.

This is no stripped-down econo-box, either. Standard features even on the cheapest version include a rearview camera, electric power steering and remote start.

For safety, there are 10 standard air bags (including knee and front- and rear-seat-mounted and roof-mounted side air bags); electronic stability control; and four-wheel antilock brakes.

My LT model included the OnStar 4G LTE system, which has a built-in wi-fi hotspot as well as MyLink technology and a seven-inch color touchscreen. Trax also is the first in its class with Siri Eyes Free, GM says.

There are plenty of interior storage areas, including upper and lower glove boxes (with a USB port and auxiliary audio jack in the upper glove box), and there is another storage cubby with a pop-up lid in the top center of the dash, just like the one in the dash of my HHR.

There is no center console storage box, but there are four cupholders in a row between the front seats, front to rear, with the two rearmost ones accessible to rear-seat passengers. In front of the gearshift is a gadget tray with a 12-volt power outlet.

In the back there is a 60/40-split/fold-flat rear seat and fold-down front passenger seatback. On the passenger side, the car can accommodate items up to eight feet long.

With its signature Chevy dual-port grille, prominent bowtie emblem and swept headlamps, the Trax is designed to be recognized immediately as a contemporary Chevrolet product, GM says.

The grille design, which includes chrome accents, was intended to emulate other Chevrolets and give the brand “a more-cohesive appearance” for its entire line of crossovers and small cars, the automaker said.

There are four passenger doors and a one-piece tailgate, with vertical taillights flanking each side of the rear hatch. Optional exterior trim items include front fog lights and simulated front and rear skid plates for a “sportier presence,” GM says.

Our LT model came with 16-inch aluminum wheels, deep-tinted glass for the rear windows and tailgate, halogen headlights and heated/power outside mirrors (with manual fold-in).

Inside, we had manual climate control, power windows and door locks with remote (but no pushbutton start), a cargo security cover that automatically raises and lowers with the tailgate, rear defroster, cruise control, air filtration, 110-volt AC power outlet, tilt/telescopic steering column, and a driver-information center with miles-to-empty readout.

We had the LT Plus Package ($670), which brought a six-way power driver’s seat, deluxe cloth/leatherette seats, leather-wrapped steering wheel, and rear parking assist.

The instrument panel is similar to that of the Sonic, with a large analog tachometer and digital speedometer. There is a small-diameter, thick-rimmed steering wheel, which will be wrapped with leather on the uplevel models. And, like the HHR, there are round turret-style air vents on each side of the dash.

LS versions come with standard cloth seating; LT models get either deluxe cloth or (with the LT Plus package) the optional cloth/leatherette seats; and LTZ models have standard leatherette (plastic). Interior color choices are Jet Black, Jet Black/Light Titanium and Jet Black/Brownstone; our tester had the Jet Black.

The 60/40 flat-folding rear seat has room for three people, and features a fold-down armrest with cupholders, along with storage pockets in the doors and front seatbacks.

Up front, there are two bucket seats, storage pockets in the doors and four storage bins in the dash. There also are bins under the rear floor and a hidden storage drawer under the front passenger seat.

While front drive is standard, the optional all-wheel drive will automatically shift part of the power to the rear wheels when necessary to maintain traction.

Standard on LS and LT versions are 16-inch wheels (aluminum on the LT), while the LTZ comes with 18-inch aluminum wheels.

There is a 14-gallon fuel tank, and regular unleaded gasoline is recommended.

Total sticker price for our LT front-drive model was $23,815, including freight, options and an options discount.

Advantages: All new for 2015, this is a sporty, fuel-efficient, peppy, comparatively roomy and fun-to-drive small crossover that fills a gap in the Chevrolet lineup left by the discontinuation of the HHR.

Negatives: Cargo area could use more space; back seat can be tight for three people.

Side air bags: Front seat-mounted; side-curtain for all rows.

Price as tested: $23,815, including freight and options (LT front-drive with LT Plus package and package discount of $175).