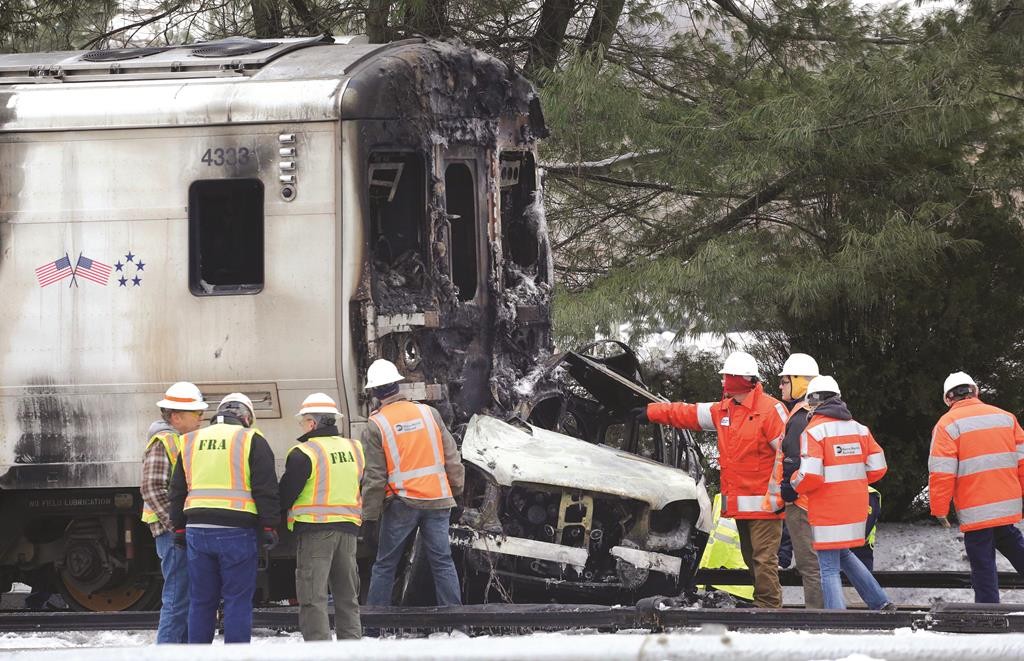 The baffling behavior of a woman whose SUV stopped between the crossing gates on a railroad track came under scrutiny Wednesday as investigators sought clues to a fiery commuter train crash that killed six people in the rush-hour collision with the SUV Tuesday evening.

National Transportation Safety Board officials were looking at the train’s black-box-style recorders, seeking to learn how fast the train was going, whether its brakes were applied and whether its horn was sounded as it approached the crossing, NTSB vice chairman Robert Sumwalt said.

Sen. Charles Schumer said that early indications are that the train was traveling at about 58 mph, within the speed limit.

“We intend to find out not only what happened, but we want to find out why it happened,” Sumwalt said at the crash site in Valhalla, about 20 miles north of New York City.

Meanwhile, officials were using dental records to identify the five badly burned victims on the train, all men. The SUV driver was identified as Ellen Schaeffer Brody, 49, a married mother of three girls from Scarsdale. Brody, who was Jewish, had been driving home from her job at Israeli Jewelry Designs in Chappaqua — which touts the shop as a favorite of Bill and Hillary Clinton.

Brody’s levayah was announced as taking place on Friday at 10:00 a.m., at the Chabad House in Dobbs Ferry, N.Y.

It was the deadliest accident in the history of one of the nation’s busiest commuter railroads — one that has come under harsh scrutiny over a series of accidents in recent years.

“It’s really inexplicable, based on the facts we have now,” Gov. Andrew Cuomo told CBS News.

“If there was an engineer problem or a train problem or an equipment problem, we’ll learn from it,” he said. ‘‘But sometimes there are just accidents.”

The wreck happened in an area where the tracks are straight but car traffic can be tricky, as drivers exiting or entering a parkway turn and cross the tracks near a wooded area and a cemetery.

Brody had gotten out of her Mercedes SUV momentarily after the crossing’s safety gates came down around her and hit her car, according to the driver behind her, Rick Hope.

“I said to myself, ‘The clock is ticking here, the gate is down, the bells are ringing — what are you going to do here?’” he said. “She looked a little confused, gets back in the car and pulls forward” on the tracks.

Westchester County Executive Rob Astorino said it appeared that the woman got out to lift the crossing gate off her vehicle.

Railroad grade crossings typically have gate arms designed to lift automatically if they hit a car or other object on the way down, railroad safety consultant Grady Cothen said. The wooden arms are designed to be easily broken if a car trapped between them moves forward or backward, he said.

As of Wednesday morning, transit officials hadn’t found any problems with the tracks or signal, Astorino said.

The impact of Tuesday’s crash was so powerful that the electrified third rail came up and pierced the train. The SUV’s gas tank exploded, starting a fire that consumed the SUV and the train’s first car, which was left blackened and mangled, its roof twisted sideways. The SUV, pushed about 400 feet, looked as though it was stuck on the front of the train.

Elizabeth Bordiga was commuting home from her nursing job at NYU Langone Medical Center in New York City when she suddenly felt the train jerk a few times. Initially, she and other passengers in the middle part of the train started calmly walking to the back. But then they started smelling gasoline, “and somebody said, “There’s a fire,” she recalled Wednesday.

But they couldn’t open the emergency window or figure out how to escape until a firefighter in the train got a door open, she said. Commuters lifted each other down from the train to the ground about 7 feet below, said Bordiga, who uses a cane and couldn’t jump.

“When I was on the ground, I looked to the right and saw flames. I couldn’t believe it,” she said.

In the train’s first car, Christopher Gross was hurled onto the floor, hearing screams and seeing flames about a foot from his head and a fellow passenger whose leg had been amputated below the knee.

“It’s life or death at this point,” he said Wednesday. And then, he said, a man whose hands were burned elbowed open the emergency exit latch, allowing some of the train’s roughly 700 passengers to escape.

The train’s engineer tried to rescue people until the smoke and flames got so severe that he had to escape, Astorino said.

Every day, trains travel across more than 212,000 highway-rail grade crossings in the U.S. There are an average of 230 to 250 deaths a year at such crossings, down over 50 percent from two decades ago, according to the FRA.

Metro-North is the nation’s second-busiest commuter railroad, after the Long Island Rail Road. It was formed in 1983 and serves about 280,000 riders a day in New York and Connecticut.