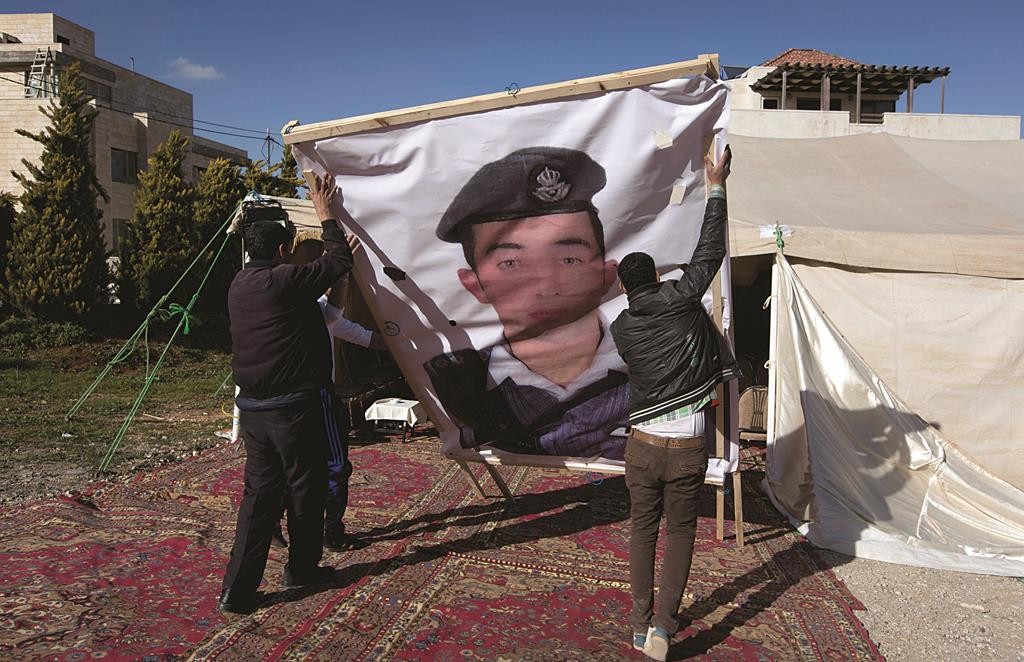 Appalled and saddened by news of journalist Kenji Goto’s purported beheading by Islamic State extremists, Japan ordered heightened security precautions Sunday and said it would persist with its non-military support for fighting terrorism.

The failure to save Goto raised fears for the life of a Jordanian fighter pilot also held by the terrorist group that controls about a third of both Syria and Iraq. Unlike some earlier messages delivered in the crisis, the video that circulated online late Saturday purporting to show a terrorist killing Goto did not mention the pilot.

Jordan renewed an offer Sunday to swap an al-Qaida prisoner for the pilot, Lt. Muath al-Kaseasbeh, who was seized after his F-16 crashed near the Islamic State group’s de facto capital, Raqqa, Syria, in December.

Government spokesman Mohammed al-Momani told The Associated Press that “we are still ready to hand over” Sajida al-Rishawi, who faces death by hanging for her role in triple hotel bombings in Jordan in 2005.

The slaying of Goto, a freelance reporter whose work focused on refugees, children and other victims of war, shocked this country, which until now had not become directly embroiled in the fight against Islamic terror.

“I feel indignation over this immoral and heinous act of terrorism,” Prime Minister Shinzo Abe told reporters after convening an emergency Cabinet meeting.

“When I think of the grief of his family, I am left speechless,” he said. “We are filled with deep regret.”

Threats from the Islamic State group prompted an order for tighter security at airports and at Japanese facilities overseas, such as embassies and schools, government spokesman Yoshihide Suga said.

Abe vowed to continue providing humanitarian aid to countries fighting the Islamic State extremists. Bowing to terrorist intimidation would prevent Japan from providing medical assistance and other aid it views as necessary for helping to restore stability in the region, he and other officials say.