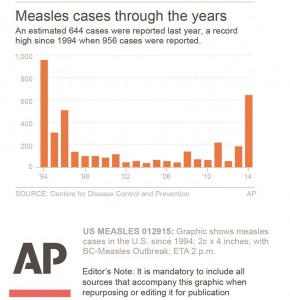 With California gripped by a measles outbreak, Dr. Charles Goodman posted a clear notice in his waiting room: His practice will no longer see children whose parents won’t get them vaccinated.

It’s a sentiment echoed by a small number of doctors who in recent years have “fired” patients who continue to believe debunked research linking vaccines to autism. They hope the strategy will lead parents to change their minds; if that fails, they hope it will at least reduce the risk to other children in the office.

The tough-love approach — which comes amid the nation’s second-biggest measles outbreak in at least 15 years, with 95 cases or more since last month, most of them traced directly or indirectly to Disneyland in Southern California — raises questions about doctors’ ethical responsibilities.

The American Academy of Pediatrics says doctors should bring up the importance of vaccinations during visits but should respect a parent’s wishes unless there’s a significant risk to the child.

“In general, pediatricians should avoid discharging patients from their practices solely because a parent refuses to immunize his or her child,” according to guidelines issued by the group.

Some mothers who have been dropped by their doctors feel “betrayed and upset,” said Dotty Hagmier, founder of the support group Moms in Charge. She said these parents made up their minds about vaccines after “careful research and diligence to understand the risks versus the benefits for their own children’s circumstances.”

The measles-mumps-rubella vaccine, or MMR, is 97 percent effective at preventing measles, according to the Centers for Disease Control and Prevention.

Measles spreads easily through the air and in enclosed spaces. Symptoms include fever, runny nose, cough and a rash all over the body. In rare cases, particularly among babies, measles can be deadly.

All states require children to get certain vaccinations to enroll in school. California is among 20 states that let parents opt out by obtaining personal belief waivers.

Nationally, childhood measles vaccination rates have held steady for years at above 90 percent. But there seem to be growing pockets of unvaccinated people in scattered communities, said Dr. Gregory Wallace of the CDC.

This article appeared in print on page 3 of the January 30th, 2015 edition of Hamodia.