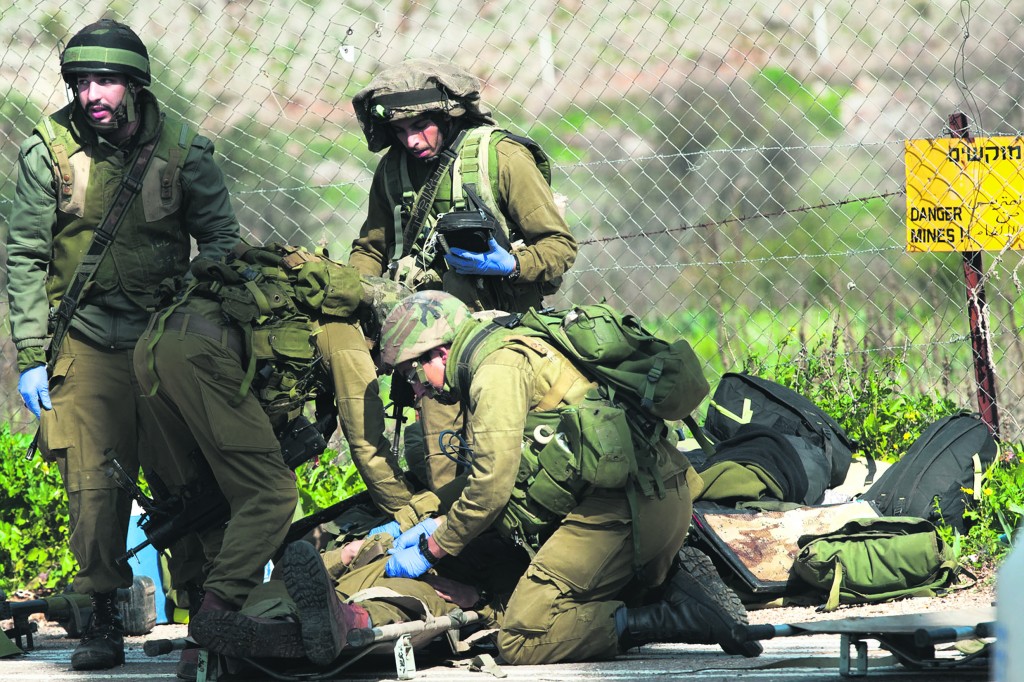 The IDF released for publication Wednesday afternoon that two soldiers were killed and two others were critically wounded in a Hizbullah strike on an army convoy near the Lebanese border. Another five soldiers were wounded in the attack, the most deadly since the Second Lebanon War in 2006.

The names of the two soldiers killed were released: Staff-Sergeant Dor Chaim Nini, 20, from Shtulim, and Major Yochai Kalangel, 25, from Har Gilo, Hy”d.

The IDF responded with aerial and ground attacks into Lebanon, including at least 50 artillery shells, according to Lebanese officials.

A Spanish peacekeeper was killed in southern Lebanon, in what the United Nations said was an incident likely related to the border flare-up.
Prime Minister Binyamin Netanyahu said Israel would respond “forcefully.”

In a statement, Hizbullah said its men destroyed a number of Israeli vehicles that were carrying Israeli officers and soldiers and caused casualties among “enemy ranks.”

It said the attack was carried out by a group calling itself the “Heroic Martyrs of Quneitra,” suggesting it was in retaliation for an Israeli airstrike on the Golan Heights on Jan. 18 that killed six Hizbullah terrorists and an Iranian general.

According to reports, the vehicle was not armored.

About an hour after the attack, mortars were fired at several Israeli military locations on Mount Dov and Mount Hermon, the IDF said. No injuries were reported in that attack. The military said it responded with fire toward Lebanese positions, and evacuated Israeli visitors from a ski resort in the area.

The flare-up recalled the beginning of the 2006 Israel-Lebanon war, which was sparked by a Hizbullah attack on an IDF vehicle along the border and the kidnapping and killing of two IDF soldiers.

The IDF said there was no indication of any Israeli soldiers captured in the attack.

But the latest salvos raised the possibility of renewed fighting along the Lebanese-Israel border, which has remained mostly quiet since the 2006 war. Since then, Israel has responded with airstrikes and artillery fire following a number of rocket attacks and shootings, but the violence has remained contained.

Earlier Wednesday, Israel launched airstrikes in Syria targeting Syrian army artillery posts in response to two rockets that were fired from Syria the previous day into the Golan Heights. No casualties were reported in that exchange of fire.

Spanish Prime Minister Mariano Rajo confirmed that a Spanish soldier had been killed. The Defense Ministry identified him as Cpl. Francisco Javier Soria Toledo, 36. Spanish Defense Minister Pedro Morenes canceled an official trip to India because of the soldier’s death, the ministry said.

Netanyahu, speaking at an event in southern Israel, warned that Israel’s enemies would face a fate similar to Hamas, the rulers of the Gaza Strip who fought a brutal 50-day war against Israel last summer.

“To anyone who is trying to challenge us on the northern border I suggest looking at what happened here, not far from the city of Sderot, in the Gaza Strip. Hamas was dealt its heaviest blow ever since its founding, and the Israel Defense Forces is prepared to act forcefully in all areas,” he said.

Defense Minister Moshe Yaalon said Israel would not tolerate any fire on its territory and would respond to any attack, whether by forces loyal to Syrian President Bashar Assad or any other group.

“The overnight attack by the air force against regime targets in an area under Assad’s control in Syria is a clear message that we will not put up with any fire at Israeli territory or any breach of our sovereignty, and we will respond with force and determination,” he said in a statement.

He warned Israel would “exact a heavy price” from anyone attacking its territory.

Washington expressed support for Israel’s right to self-defense, but said it did not want “an escalation of the situation.”

“We call upon all parties to avoid any action that would jeopardize the long-held cease-fire between Israel and Syria and abide by the 1974 disengagement of forces agreement,” State Department spokesman Jen Psaki said.