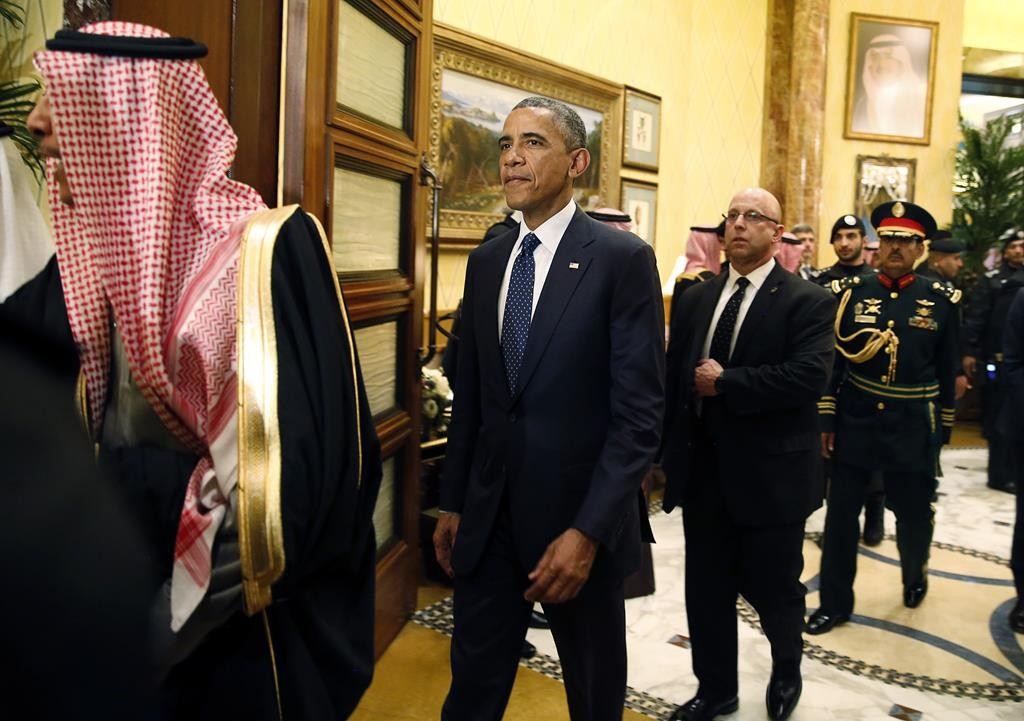 President Barack Obama defended the U.S. government’s willingness to cooperate closely with Saudi Arabia on national security despite deep concerns over human rights abuses, as he joined an array of current and former American statesmen Tuesday in paying respects following the death of King Abdullah.

Saudi Arabia’s status as one of Washington’s most important Arab allies has at times appeared to trump U.S. concerns about the terrorist funding that flows from the kingdom and about human rights abuses. But in his meeting with Saudi Arabia’s new king, Obama brought up human rights only in broad terms, without citing specific cases, a senior Obama administration official said.

Obama, in a CNN interview in advance of his arrival, said he has found it most effective to apply steady pressure over human rights “even as we are getting business done that needs to get done.”

“Sometimes we need to balance our need to speak to them about human rights issues with immediate concerns we have in terms of counterterrorism or dealing with regional stability,” Obama said.

During his brief stop in Riyadh, Obama held his first formal meeting with King Salman bin Abdul-Aziz Al Saud Salman, newly installed on the throne following the death of the 90-year-old Abdullah on Friday. The roughly hour-long meeting focused on a bevy of Mideast security issues — sectarian divisions in Iraq, the U.S.-led campaign against the Islamic State group, the precarious situation in Yemen and support for Syrian opposition fighting President Bashar Assad, said the U.S. official who briefed reporters traveling with Obama on condition of anonymity, citing the private nature of the talks.

Obama invoked human rights during the sit-down to make the point that tolerance and free speech are necessary to undercut the extremist ideology that fuels terrorist groups. The official said Obama told the king that it’s important to ensure citizens have an outlet to express themselves.

But the president did not bring up U.S. concerns about Saudi Arabia’s flogging of pundit Raif Badawi, who was convicted of insulting Islam and sentenced to 10 years in prison and 1,000 lashes. His first flogging took place in early January in front of dozens of people in the Red Sea city of Jiddah.

Secretary of State John Kerry joined Obama in Riyadh, along with former Secretaries of State Condoleezza Rice and James Baker III, both of whom served Republican presidents.