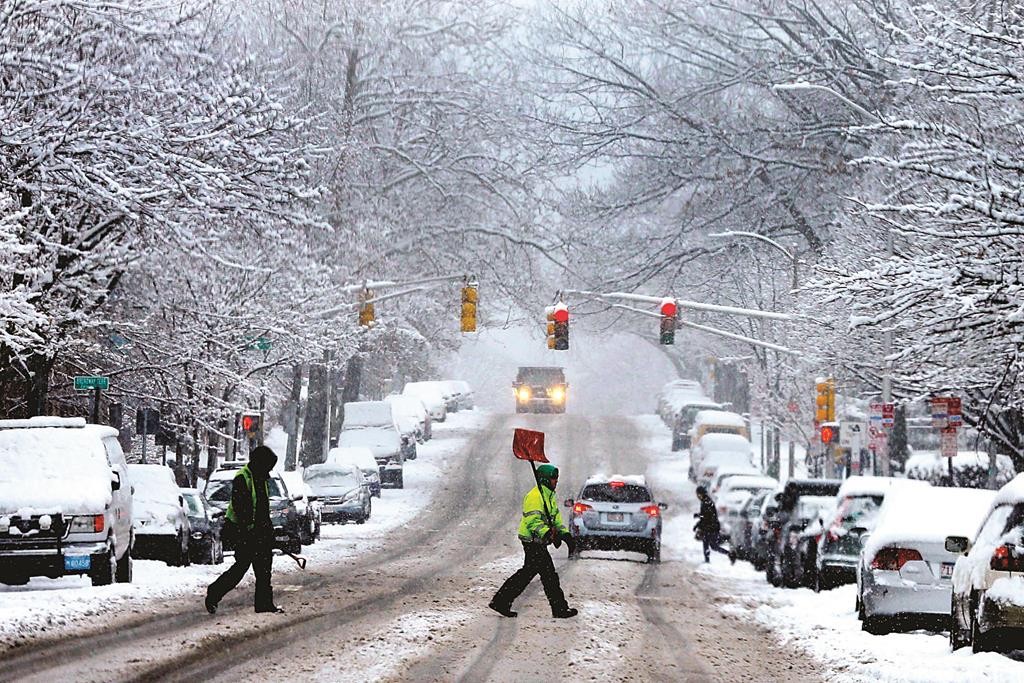 A “potentially historic” storm could dump 2 to 3 feet of snow from northern New Jersey to Connecticut starting Monday, crippling a region that has largely been spared so far this winter, the National Weather Service said.

A blizzard warning was issued for New York and Boston, and the National Weather Service said the massive storm would bring heavy snow and powerful winds starting Monday and into Tuesday.

“This could be a storm the likes of which we have never seen before,” New York City Mayor Bill de Blasio said at a news conference on Sunday.

De Blasio held up a piece of paper showing the city’s top 10 snowstorms and said this one could land at the top of a list that goes back to 1872, including the 26.9 inches that fell in 2006. “Don’t underestimate this storm. Prepare for the worst,” he said as he urged residents to plan to leave work early Monday.

Boston is expected to get 18 to 24 inches of snow, and Philadelphia could see 14 to 18 inches, the weather service said.

A weekend storm that had brought snow and slush to the Northeast — the first real snow of the season for many areas — was just a warm-up.

“Looks like our luck is about to run out,” said John Paulsen as he gassed up his SUV in New Jersey. “I can’t complain too much since we’ve had a pretty mild winter, but I don’t know if I’m ready for a foot or so of snow all at once.”

The storm system driving out of the Midwest brought snow to Ohio on Sunday and was expected to ultimately spread from the nation’s capital to Maine for a “crippling and potentially historic blizzard,” the National Weather Service said.

The Washington area expected only a coating or a bit more, with steadily increasing amounts expected as the storm plods its way north. The storm promised treacherous travel by both land and air throughout the busy Northeast corridor.

Preparations large and small were in effect elsewhere in New York. A Manhattan Home Depot store sold about twice as many shovels over the weekend as it normally does while transit officials hoping to keep the subways running smoothly planned to use modified subway cars loaded with de-icing fluid to spray the third rail that powers trains.

Farther north, a blizzard warning was issued for Boston from Monday night through early Wednesday. Wind gusts of 60 mph or more are possible on Cape Cod, forecasters said.

Wyatt Baars, manager of the Charlestown Ace Hardware in Boston, sold out of his bags of ice-melting pellets. But he said a New Hampshire distributor is helping him and delivering more.

“Everybody is preparing for the storm,” he said. “When we have something this big on the horizon, everybody comes in for the ice melt, snow shovels, snow brooms.”

Snow plow driver Al Laplant expected to be out clearing roads in Simsbury, Connecticut, this week, just as he has for more than two decades.