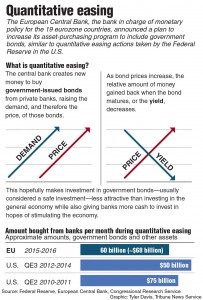 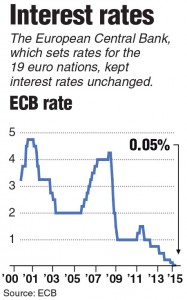 The European Central Bank announced a huge monetary-stimulus plan designed to boost the region’s sagging economy and fend off the specter of deflation.

At a packed news conference streamed online from the ECB’s headquarters in Frankfurt, Germany, the central bank’s president, Mario Draghi, said the new program was needed because, among other reasons, the inflation rate had dropped into negative territory in recent weeks despite ECB bond-buying programs already in place.

“There is little doubt, in our view at least, that one should act,” Draghi said.

Draghi said the ECB, the equivalent of the U.S. Federal Reserve, would buy bonds, including the controversial measure of buying the sovereign debt of struggling European nations like Spain, Italy and Greece, at the rate of about 60 billion euros, or $68.9 billion, a month through September 2016, for a potential total of more than 1 trillion euros. The monthly bond-buying rate is only slightly smaller than the giant monetary-stimulus program, known as quantitative easing, recently ended by the U.S. Federal Reserve.

European stock markets rallied on the news. Some kind of program had been widely anticipated, but the main question surrounded its scale, which came in slightly above the upper range of most forecasts. Britain’s FTSE 100 stock index jumped more than 1.6 percent in midday trading Thursday, while France’s CAC 40 and Germany’s DAX indexes were up just under 1 percent.

Thursday’s announcement followed months of public and behind-the-scenes wrangling, particularly with Germany’s powerful Bundesbank, over whether and how forcefully the ECB should act in the face of worrying economic data across the 19-member eurozone. The ECB’s sole mandate is to maintain the stability of the euro.

“The risks for the euro area remain on the down side,” he said.

Draghi acknowledged that the vote to approve the measure was not unanimous, but didn’t specify the vote totals.

German officials have argued that the region’s economic troubles stem mostly from structural problems — including high labor costs and high public debt — in individual countries in the region’s southern tier and that a giant stimulus program would only allow those countries to delay needed reforms.

Draghi on Thursday denied that the new program would delay such measures and said the program would only work if governments implemented reforms at the same time. “It’s now up to governments to implement structural reforms,” he said.

The big question about the ECB program now is: Will it be enough?

Analysts have criticized the central bank for being slow to act and fear that the stimulus, even if slightly bigger than expected, will be too little, too late. Draghi himself pointed to data indicating that the inflation rate in the eurozone is expected to be less than 0.5 percent for the next five years. Such low expectations prompt fears that Europe could teeter into a Japanese-style deflationary trap, in which consumers, expecting prices to fall, hold off on purchases, prompting businesses to produce less and economic activity to slow further.

The eurozone’s economy has been slowing and is forecast for a meager 1.2 percent growth in 2015. Meanwhile, the euro has been sinking steadily against the dollar and other currencies, from a peak of $1.39 in March, to about $1.14 on Thursday, after falling further following Draghi’s announcement.

Indeed, a key expected effect of the ECB program is to sink the euro further, providing a boost to European economies, which rely heavily on exports.

“Given that exports run from 30 percent to 50 percent of GDP in some European countries, that’s where the real impact is going to be,” said Bob Johnson, director of economic analysis for mutual-fund research firm Morningstar Inc. “Weakness in the currency will make (European economies) far more competitive.”

This article appeared in print in the January 23rd, 2015 edition of Hamodia.