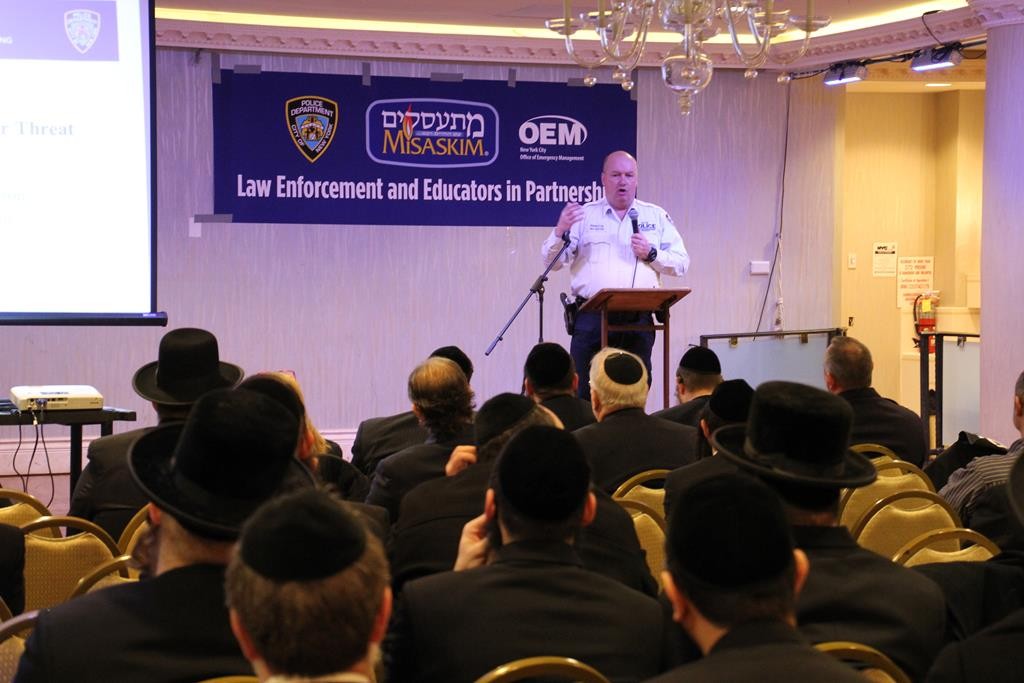 Backdropped by a recent increase in terror acts across the globe, top counterterrorism officials in New York City came to Boro Park on Thursday to urge yeshivah administrators to conduct drills to make staff and students aware of what to do if the unthinkable occurs.

Speaking at the Bais Sara school for girls at an event sponsored by Misaskim, Kathleen Thompson, director of the NYPD counterterrorism division, said that the latest police studies show that the increasing lone shooter attack is different than all others and should be treated differently.

When a man walked into the main Lubavitcher shul in Crown Heights two months ago and stabbed someone, Inspector Philip Van Gostein, the NYPD Patrol Borough Brooklyn South Counter-Terrorism Coordinator questioned the audience of about 100 yeshivah representatives and NYPD officers, what did he do first?

“He parked illegally,” Van Gostien said. A police stop-question-and-frisk at that point may have prevented the attack, he suggested, since it is the little things that assailants do that set off alarm bells.

Van Gostien discussed educating bus drivers and secretaries, the first layer of defense against an attacker.

“The best way to keep yourself safe,” he said, “is by keeping that danger outside of the building.”

Van Gostien offered to go around to individual yeshivos and schools to make sure they are protected.

Thompson said that a police profile of the active shooter, culled from intensive studies of dozens of such incidents around the world, reveal a friendless loner with no control over his life, as opposed to a hostage-taker or even an armed robber.

While most perpetrators try to do the crime and disappear, shooters want to go down in a hail of attention to assert control over someone else.

“It is important to remember when this situation develops,” she said, “that they are not looking for a fight, they are looking to control.”

When police enter the scene, attackers usually end up killing themselves when they realize they are no longer in control, Thompson said.

Victims of these shooters usually describe them as “calm” and “methodical.” They scout the area beforehand, sometimes even performing a dry run. Their computers typically are full of searches on previous attackers.

The way to have control of the situation, said Thompson, who also showed a video of a drill to prevent workplace violence, is by preparing everyone in advance. Everyone can be expected to be scared, she noted, but whether they panic depends on whether the school has a plan.

Students should know to report anything suspicious about the school building, such as a locked front door that is supposed to be open, and should know evacuation routes. Each school should have a designated safe room fortified with brick walls and strong doors.

Have the NYPD connect to school’s CCTV systems so they do not need to physically enter the building to know what is going on, Thompson suggested. Another idea: It is not enough to have a buzzer system for the front door. Secretaries should also identify people before allowing them into the building.

Other speakers included the city’s Office of Emergency Management Commissioner Joe Esposito and a representative of the Health Department — who discussed the recent shigella outbreak. David Pollack of the JCRC gave an update on how schools can obtain up to $75,000 in federal Homeland Security grants, which are currently tied up in budget negotiations between President Obama and Congress.

Esposito, a former commander of Boro Park’s 66th precinct, said that he lives and works within the Orthodox community, which he called a very informed community.

So when you see something, he said, say something.