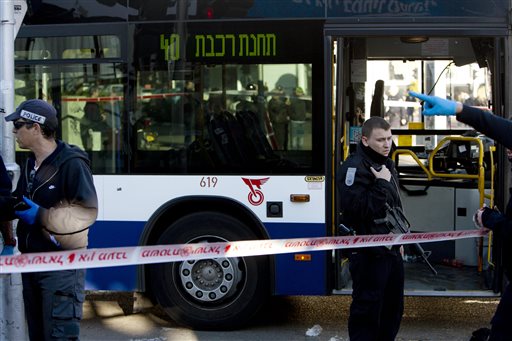 A 22-year-old Palestinian from Tulkarm went on a rampage during the morning rush-hour in northern Tel Aviv on Wednesday, stabbing people on a bus and in the street before being shot down and taken into custody.

Reports varied, but as many as 13 people were wounded, some seriously, including Herzl Biton, driver of the No. 40 bus, who fought back as he was stabbed multiple times in the upper body and was evacuated to a nearby hospital.

Biton called his friend, Kazis Matzliach, during the melee, to tell him that if “something happens to me, please take care of my children.” Matzliach said he could hear the sounds of screaming in the background.

The terror did not end on the bus, but continued when the knife-wielding attacker, Hamza Mohammed Matroukh, exited the bus after it slowed to a stop and then pursued fleeing passengers and pedestrians at the busy Maariv Junction.

Security camera footage made available to the public later in the day captured some of the viciousness, as it showed him pursuing people in the street, stabbing one woman in the back, and her collapsing on the sidewalk.

While the driver was under attack, the swerving bus caught the attention of an Israel Prison Service team that was driving behind the bus en route to the Tel Aviv courthouse. When the bus stopped and passengers could be seen fleeing, three of the IPS officers gave chase through parking lots and side streets until one shot the attacker in the leg. The terrorist was then brought in for interrogation.

Matroukh told Shin Bet interrogators that he was motivated by last summer’s Gaza war, alleged Israeli attempts to take over Har Habayis from the Muslims and watching extremist Islamic content that glorifies “the reaching of heaven,” through jihad.

A report on the Palestinian Ma’an News Agency indicated that it was probably another “lone wolf” attack, as it quoted residents of the Tulkarm refugee camp saying Matrouk was not affiliated with any terrorist group.

Israeli Prime Minister Binyamin Netanyahu denounced the attack as “a direct result of venomous incitement disseminated in the Palestinian Authority against Jews and their country.”

A statement released by the Prime Minister’s media adviser on Wednesday afternoon was accompanied by four photographs put out by the PA that illustrate the kind of incitement that it routinely disseminates, “a regular platform for glorification” of terrorists. One picture showed a terrorist who participated in the March 1975 terrorist attack on the Savoy Hotel in Tel Aviv in which 11 Israelis were murdered; another, Ra’ed Carmi, a Fatah archmurderer from the second intifada, takes pride in the fact that he was directly responsible for the deaths of 165 Israelis and the wounding of over 1,800 others.

President Reuven Rivlin urged world leaders to “come to their senses” and to give “legal and international legitimacy to a genuine war against terrorism.” He said the United Nations member states must redefine the legal means available to governments seeking to protect their citizens from the scourge of terrorism.

The U.S. Embassy put out a safety advisory, saying that “in light of the stabbing attack on a public bus in Tel Aviv on January 21, U.S. citizens are reminded that due to security concerns, U.S. government employees are prohibited from using public buses throughout Israel and the West Bank.”

There was no immediate response from the Palestinian Authority; but Izzat Risheq, a Hamas leader in Qatar, sent a message praising it as a “brave and heroic” act.

“I strongly condemn today’s terror attack in Tel Aviv. New York City stands united to ensure that Jewish communities across the globe are able to live peacefully and safely, from Brooklyn to Paris to Israel.” Mayor Bill de Blasio said in a statement. “My thoughts are with the victims, their families, and entire city and country, and I pray for‎ a speedy recovery for the victims. We continue to hope for a peaceful and secure future for Israel and all of its people.”

New York City Comptroller Scott M. Stringer also released a statement saying that “I condemn this cowardly, contemptible attack, and the terrorism that has once again descended on Israel. As New Yorkers, we deplore such violence wherever it occurs – on a bus in Tel Aviv or anywhere else in the world. My thoughts and prayers are with the victims of this crime.”

MDA paramedic Shai Pinhas, who arrived first at the scene, said that he “saw a bus surrounded by tumult. There were wounded people walking around, some of them outside of the bus and two of them inside. Everyone was fully conscious but with stab wounds to the chest and extremities.”

Liel Suissa, an 8th grader from Bat Yam, was on his way to school when he said, “the terrorist suddenly began stabbing. We all ran back. Most people came flying towards me,” he told Ynet.

“I was sitting on the bus and I heard people shouting. The terrorist had suddenly gone to the driver and stabbed him. He was shouting things, but I couldn’t hear clearly. I saw him stab the driver, and I ran to the back with the others to get away from him. He approached us, I broke the window and got out.”

Sapir Tzioni, 22, from Bat Yam, was on her way to work. “Suddenly I saw that the driver started to lose control. I saw the terrorist begin to stab people wildly and I heard screaming. He started stabbing the driver and slowly advance, and I saw that they were fighting,” she said.

Sapir was treated for shock at Tel Hashomer Hospital and discharged later in the day.

One passenger on the bus, who identified herself as Orly to Israel Radio, summed up simply: “He had murder in his eyes.”

As in every such tragedy, there are nissim.

“Every morning I pass the intersection in the area at 7:30 a.m.” a man named Shmuel told Arutz Sheva. “This morning I was a few minutes late due to the relatively long Rosh Chodesh prayers.”

“When I hear that passersby were stabbed and collapsed, I get shivers from the knowledge that I was supposed to be there.”

“I arrived at the intersection minutes afterwards,” he said. “When I arrived there I saw the wounded receiving initial medical treatment from the rescue forces, and the police started to close the area.”