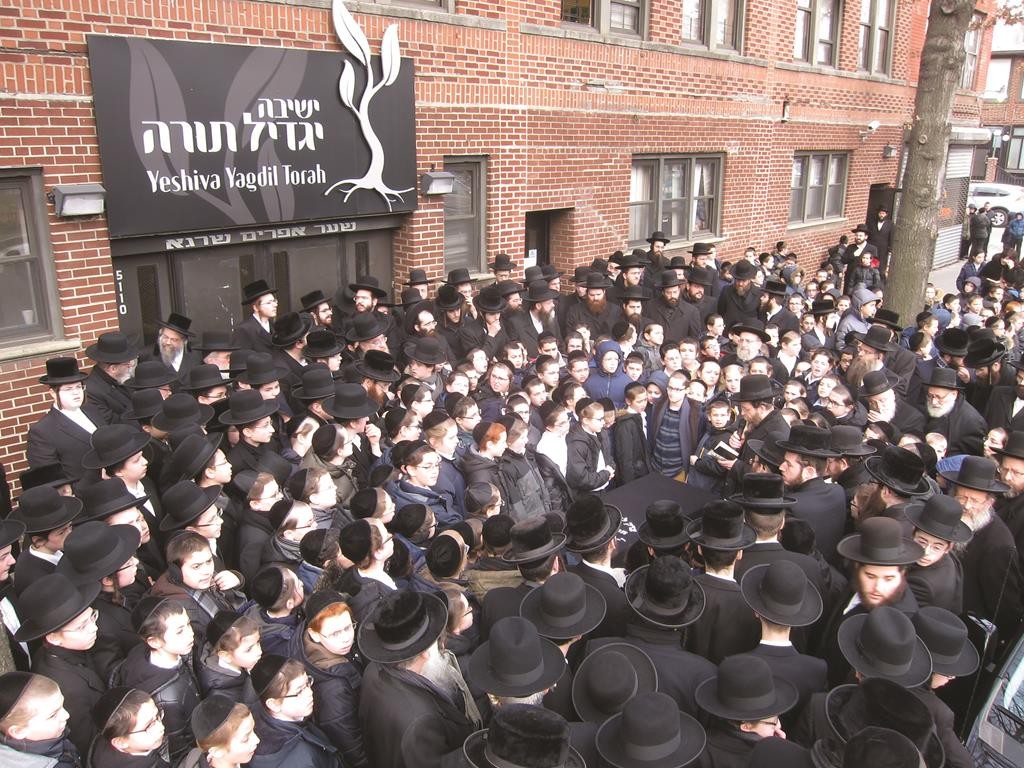 An overflow crowd gathered on Wednesday, Rosh Chodesh Shvat, to pay last respects to Mrs. Rivka Hendel Silberberg, a”h. It began at Shomrei HaChomos funeral home in Boro Park, where Harav Elya Fisher, shlita, Rosh Kollel Gur, led the recitation of Tehilim, as hespeidim were not permitted. A grandson, Reb Aaron Aryeh Eisenberg read a letter that the nifteres wrote 19 years ago, asking that it be read at her levayah, and the Skolya Rebbe, Harav Raphael Goldstein, shlita, delivered divrei preidah.

A second levayah was held immediately afterward in front of Yeshivah Yagdil Torah, where a crowd of melamdim, talmidim and some of the parent body heard the menahel, Harav Eliezer Baum, deliver divrei preidah to the nifteres, whose devotion to the yeshivah over many decades exemplified her tremendous ahavas Torah. After Rabbi Menachem Dov Taub, a grandson, spoke in the name of the family, chashuvah Gerrer Chassidim carried her aron down the block, followed by talmidim and staff.

Mrs. Silberberg was born in Brooklyn in November 1922, six weeks after her parents immigrated to the United States from Romania. Her father, Harav Avraham Binyamin Beinish Auerbach, zt”l, known as the Yerushalayimer Rebbe after his birthplace, was a grandson of Harav Meir Auerbach, zt”l,  the Imrei Binah. Her mother, Rebbetzin Devora, a”h, was a bas kedoshim whose forebears included Harav Meir Primishlaner, Harav Uri Strelisker and Harav Yechiel Michel Zlototchover, among others, the most well-known of whom was the Baal Shem Tov, zecher tzaddikim livrachah. All of her life she felt her yichus to be an obligation to bring nachas ruach to Hashem and her illustrious ancestors, and she transmitted that feeling to her children, grandchildren and great-grandchildren.

She was the second of nine children, all of them raised in America, yet totally committed to a life of Torah and yiras Hashem. She was married for over 50 years to Reb Yitzchok Yissocher Menachem Mendel Silberberg, z”l, the son of the Pittsburgher Rav, Harav Avraham Binyamin Silberberg, zt”l, a first cousin to her father. Together with her husband, she raised three sons and two daughters and lived to see many great-great-grandchildren, a zechus for which she constantly thanked Hashem.

Mrs. Silberberg was also the honorary grandmother of many others: the talmidim and staff members of Yeshiva Yagdil Torah; neighbors’ children, who loved to hear about how life was lived 90 years ago in America; and the many lonely people she befriended and often hosted for a Shabbos or Yom Tov meal. With a good word for everyone and a positive attitude no matter the circumstances, she was beloved by all who knew her.

For many decades, Mrs. Silberberg sent out twice-yearly tzedakah mailings to benefit Kolel Metzuyanim, in Yerushalayim. Not wanting anyone to know it was her effort, she had the envelopes returned first to Harav Mordche Yehuda Lubart, zt”l, and after his petirah to Reb Ephraim Birnhack, a son-in-law. That is how, over many years, she single-handedly raised over $60,000 for the kollel. Yet her own home was extremely humble; as a grandchild once remarked, “Bubby does the impossible. She manages to gives to others more than she has.”

She is survived by the children and einiklach of her oldest son, Reb Mordecai Meyer, a”h, who was niftar in 1994; Mrs. Sarah Birnhack, the wife of Reb Ephraim Birnhack, the well-known aleph-beis melamed in Ger; Reb Michoel Silberberg, son-in-law of Harav Yissocher Ber Laufer of Nadvorna-Banya, zt”l; Mrs. Faigie Eisenberg, the almanah of renowned mechanech Rabbi Baruch Eisenberg, z”l, who lives in Skver; and Harav Chaim Yaakov Naftali Silberberg, a Gerrer chassid who lives in Tel Aviv, son-in-law of Reb Chaim Mandel, z”l,  of Antwerp.

She is also survived by three sisters: Mrs. Freida Feig, Mrs. Bella Waks and Mrs. Nechama Moskowitz; and her youngest brother, Reb Moshe Auerbach, as well hundreds of nieces and nephews who will always fondly remember her for her tznius, her emunah, her chessed and her unswerving dedication to the principles that were inculcated in her by her parents.

Shivah will be observed at her home, 1843 53rd Street in Boro Park, until  Tuesday morning, 7 Shvat/January 27.