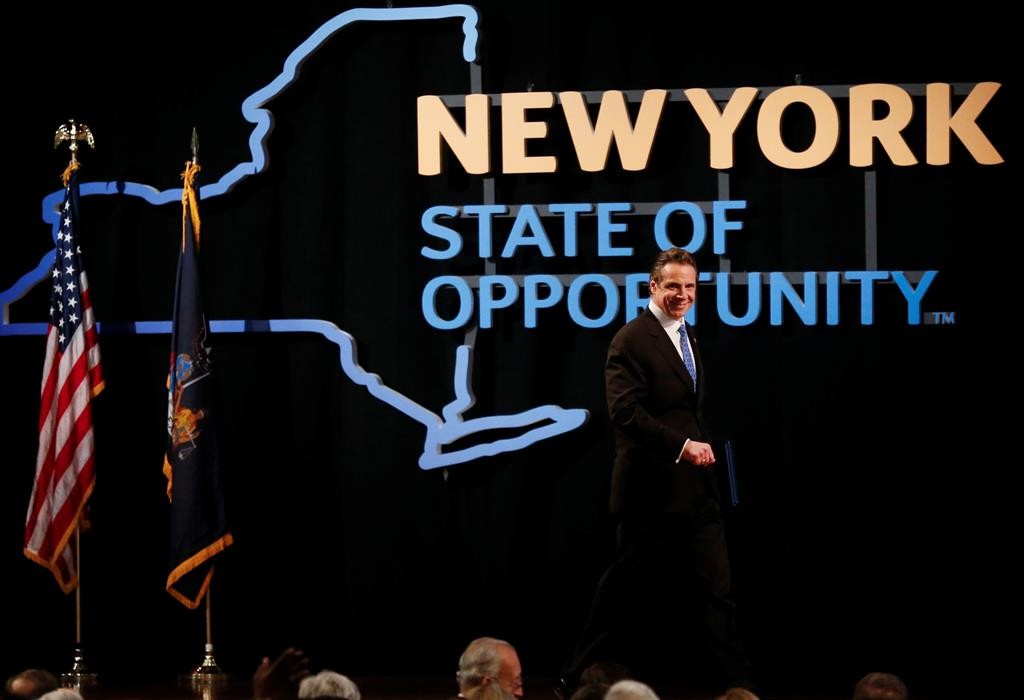 Democratic Gov. Andrew Cuomo called for big investments in transportation, a higher minimum wage and a new teacher evaluation system Wednesday in a sprawling address that laid out his priorities for 2015.

In the first State of the State address of his second term, Cuomo also pitched small business tax cuts and relief for homeowners struggling with high property taxes.

To address concerns about police misconduct and officer safety, Cuomo proposed a series of reforms designed to restore public faith in the justice system while protecting law enforcement.

The speech was accompanied by Cuomo’s $141.6 billion proposed state budget. Sprinkled throughout the spending plan are several other big and often contentious ideas: financial aid to students in the country illegally, more charter schools and a plan to make upstate regions compete against one another to win $1.5 billion in economic development funds.

“New York is the state that leads, and it always has,” Cuomo told a 2,200-person audience at the Empire State Plaza Convention Center. “While Washington fights and gridlocks, we find compromise and move forward.”

Compromise on the education proposals may be elusive. Cuomo vowed to support $1.1 billion in new education funding — but only if lawmakers overhaul the way teachers are evaluated to make it easier to remove failing teachers.

“This is the area where we need to do the most reform and where, frankly, reform is going to be difficult,” Cuomo said.

“This would work if we were putting cars together, and these were widgets,” she said of Cuomo’s ideas. “But these are children. …The governor truly doesn’t understand education.”

Law enforcement is another fractious issue, with some lawmakers urging changes in how police misconduct cases are handled following the death of Eric Garner, a black man, by a white police officer. Others want greater protections for police following the shooting deaths of two officers.

On Wednesday, state troopers arrested 22 protesters who sat and linked arms at the entrance to Cuomo’s address. Some were yelling, “Black lives matter!”

Cuomo proposed increasing diversity in police ranks and appointing an independent monitor to review cases in which grand juries do not indict officers in civilians’ deaths. He also called for more body armor and bulletproof glass in police cars.

“The community has to respect and trust the police, and police have to trust and respect the community,” Cuomo said.

“If you work fulltime, you should be able to pay the rent and pay for food and not live in poverty,” Cuomo said. “That’s the basic promise of employment, and we’re not there yet.”

Some have pushed for a bigger wage increase, and New York City Mayor Bill de Blasio has asked for state authority to raise it to $13.30.

“It’s a big step forward, but $11.50 doesn’t do it in New York City,” said Assemblyman Brian Kavanagh, a Manhattan Democrat.

De Blasio praised Cuomo for taking up the issue and said he wants to see New York City determine its own wage level.

“What you see around the country is cities acting to address income inequality in a very forceful way,” he said. “You see it in Seattle, in Los Angeles, in Chicago.”

Cuomo also proposed a tax cut for small businesses and a tax credit program that would provide an estimated $1,000 to homeowners with incomes below $250,000 and whose property tax burden exceeds 6 percent of their income.

For upstate New York, Cuomo proposed spending $1.2 billion on the state Thruway to avoid new tolls this year and reduce a future toll increase on the new Tappan Zee Bridge.

For downstate, Cuomo proposed money for a rail link to LaGuardia Airport in Queens, four new rail stations to connect the Bronx to Manhattan and $750 million for new buses, subway cars and upgrades for the Metropolitan Transportation Authority.

Lawmakers will now review Cuomo’s proposals and attempt to negotiate changes before voting on the budget.

“I’m sure there are going to be adjustments,” said Republican Senate Leader Dean Skelos of Long Island.