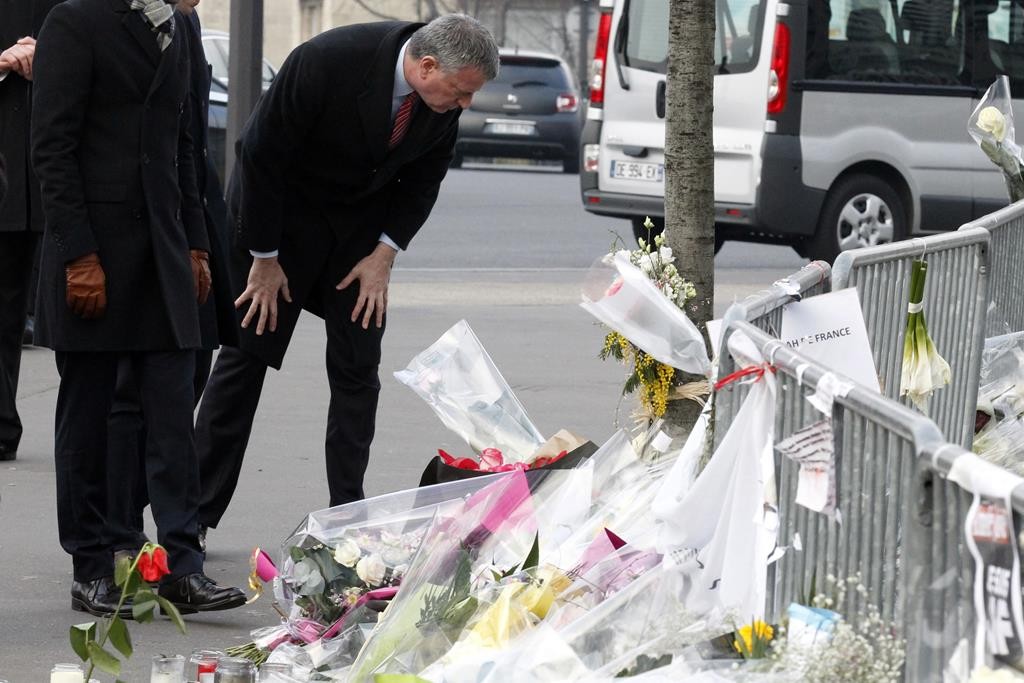 Mayor Bill de Blasio made a quick trip to Paris on Tuesday to show his and his city’s support in the wake of a spate of bloody terrorist attacks that horrified France.

De Blasio paid his respects at the offices of the Charlie Hebdo satirical newspaper and at a kosher supermarket, leaving flowers to join the already numerous bouquets. He was accompanied by Paris Mayor Anne Hidalgo and at one point, and Charlie Hebdo columnist Patrick Pelloux.

Speaking to reporters, Hidalgo said de Blasio was the first person to call her after the attacks. “This was very moving for me,” she said in French.

De Blasio said the trip was to show his city’s solidarity with Paris, as places that have experienced terrorism.

“We have borne the brunt of terror, and we have, over many years, shown the world an example — each in our own way — of tolerance and inclusion, of a pluralistic society, a multicultural society,” he said.

Asked about the relationship between the two cities, he said it was even deeper, that the attacks were a turning point for Paris the way the Sept. 11, attacks were for New York City in 2001.

“Every one of us who was in New York that day remembers where we were, and remembers the way it changed our lives,” he said. “I think for the people of Paris, these attacks had that same impact. And it challenges us to find a way forward.”

“I have the honor of being the mayor of the city with the largest Jewish population on earth,” he said, “and I wanted to be here in solidarity with the Jewish community of Paris. … This is a community that stands for so much that’s good in the world, and deserves protection.”