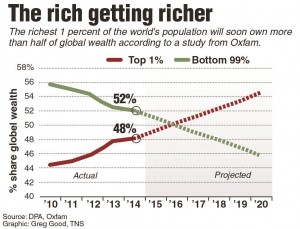 The richest 1 percent of the population will own more than half the world’s wealth by 2016, Oxfam International said in a report released as the World Economic Forum begins in Davos, Switzerland.

Oxfam said the world’s richest people saw their share of global wealth jump to 48 percent last year from 44 percent in 2009. Rising inequality is holding back the fight against global poverty as the world’s biggest companies lobby the U.S. and European Union for beneficial tax changes at a time when average taxpayers are still paying the bill for the financial crisis, Oxfam said.

“Do we really want to live in a world where the 1 percent own more than the rest of us combined?” Winnie Byanyima, Oxfam’s executive director, said in a statement.

This article appeared in print on page 3 of the January 20th, 2015 edition of Hamodia.