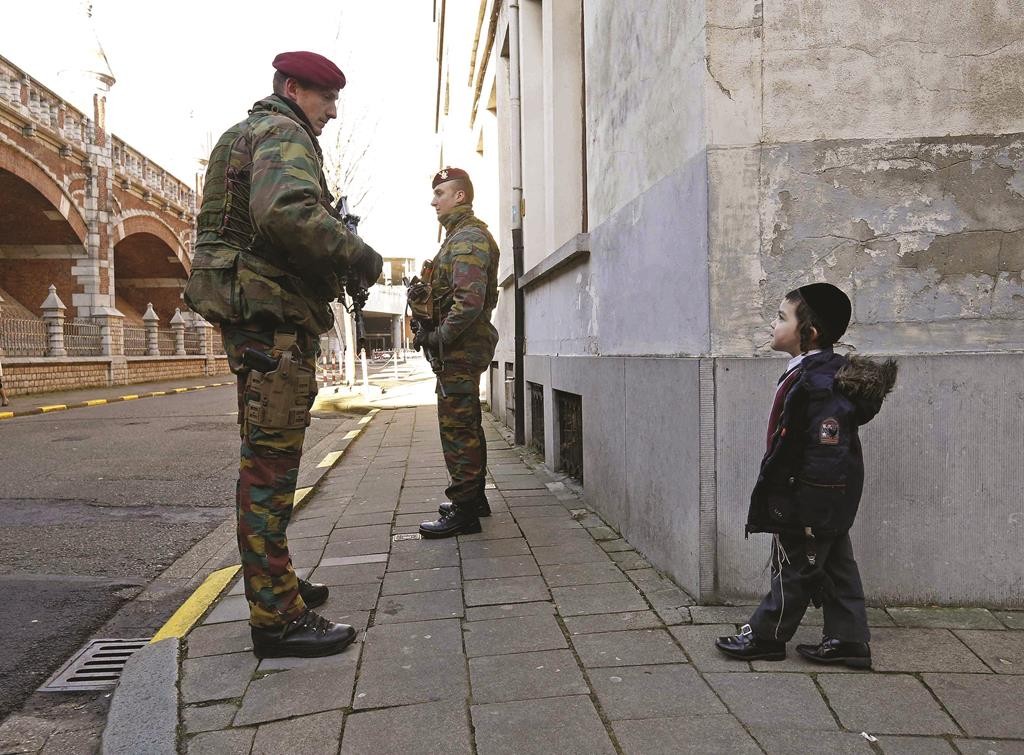 Belgium ordered its army into the streets and anti-terror raids across Western Europe netted dozens of suspects Friday as authorities rushed to thwart more attacks by people with links to Mideast Islamic extremists. Security teams focused on buildings that house government organizations, international institutions, foreign embassies, and the Jewish communities of Antwerp and Brussels.

“Some people are clearly nervous,” Harav Yaakov Dovid Schmahl of Khal Shomrei Hadaas of Antwerp told Hamodia. “Some schools closed on Friday on advice from the Israeli consulate, on Sunday even though the police did not make any such warning but, baruch Hashem, today they are all open.”

Rav Schmahl said that most shuls and Jewish schools in Antwerp, one of Europe’s largest Jewish communities, were being guarded by military personnel.

“You don’t have the firepower to stop people with weapons of warfare,” unless troops are involved, Antwerp Mayor Bart De Wever said. “We have an important Jewish community in this city which is very visible and an important target for Islamic terror,” he told VRT network.

As anxiety soared in the wake of last week’s bloody spree in and around Paris, the broad scope of the police actions illustrated the challenges facing a continent threatened by Islamic militancy far from the battlefields of Syria, Iraq and Yemen.

Rob Wainwright, head of the police agency Europol, told The Associated Press that foiling such attacks by returning jihadists had become “extremely difficult” because Europe’s estimated 2,500 to 5,000 radicalized Muslim extremists have little command structure and are increasingly sophisticated.

The sweep followed a vast anti-terrorism sweep on Thursday in and around Brussels and the eastern industrial city of Verviers in which two suspects were killed in a firefight and a third wounded as police closed in on their hideout. Authorities said the overnight operation netted several returnees from Islamic holy war in Syria.

Federal magistrate Eric Van der Sypt said Friday the suspects were within hours of implementing a plan to kill police. He said authorities were reasonably confident they had dismantled the core of a dangerous terrorist cell but more suspects could be at large.

“I cannot confirm that we arrested everyone in this group,” he told reporters.

Authorities have said there was no apparent link between the foiled plots in Belgium and last week’s terror attacks in Paris on a satirical newspaper and a kosher supermarket.

Authorities said most of those detained or killed in Belgium were citizens and some had returned from Syria, where 450 Belgians are believed to have joined the fight with Islamic radicals, according to Peter Neumann of the London-based International Center for the Study of Radicalization. He said about 150 have since returned home.

The Belgian government, meanwhile, announced it was sending army troops into the streets beginning Saturday, part of a 12-point, anti-terror plan lawmakers agreed to in the wake of Thursday’s deadly firefight. The government will also expand legislation to make traveling abroad with a terror goal a crime and allowing authorities to seize the ID cards of people suspected of traveling to such areas.

“The government is beginning to take action in terms of providing visible security and reassuring the Jewish community, Philip Carmel, European Policy Advisor to the Brussels-based European Jewish Congress told Hamodia. “People are very scarred to know that there are people living in their own society who are trained to target them, but the fact that the army was called up for this is unprecedented.”

Carmel said that there was a sense of reassurance not only from the military presence, but from broader anti-terror measures such as stricter border control and greater coordination across European states.

“I was in Kiev for this past Shabbos,” he said “There were plenty of frum Jews walking the streets there. It feels a little ridiculous that I felt there safer than here in Brussels.”