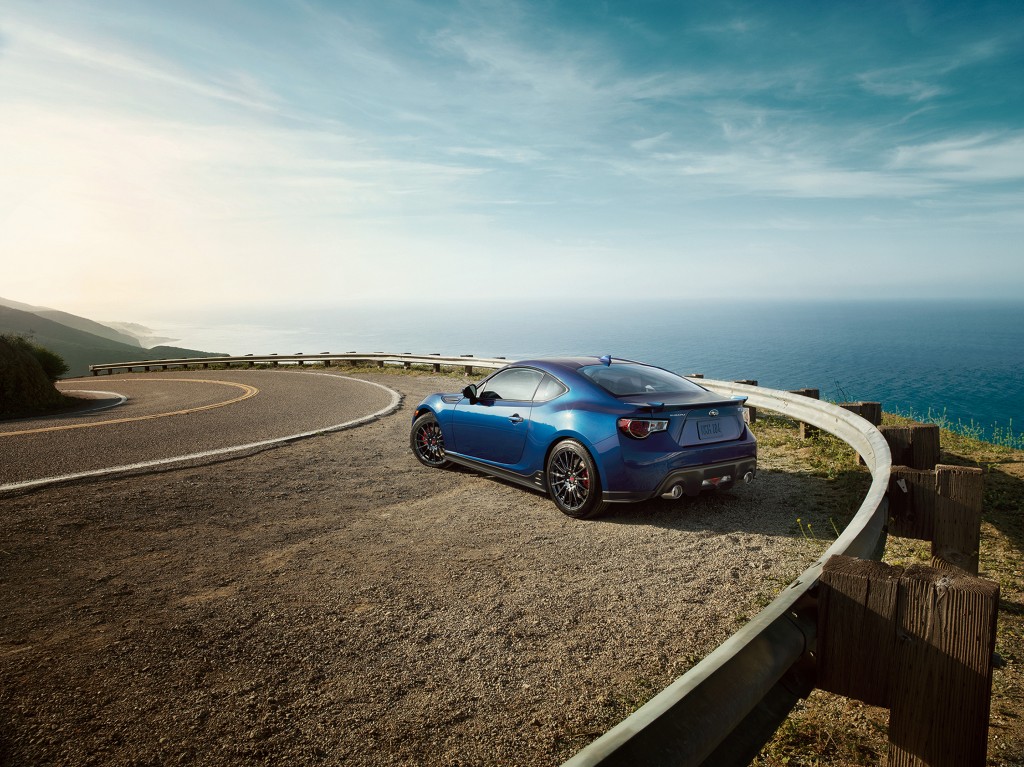 Every time I slid into the Subaru BRZ, I wondered whether I had left my backpack on my mom’s kitchen table.

But regardless of your age, a Subaru BRZ — even in refrigerator white — can whisk you back to those days of youth.

Nothing in the auto industry feels younger than the Breeze, which is entering its third year of production.

Feed the BRZ a fast, twisty road, and it responds with a surgical, magical, grin-inducing blast that few cars can match.

The resulting Subayota — or Toybaru, if you prefer — is sold by Subaru as the BRZ and by Toyota’s oddball Scion division as the FR-S.

Born to run, the BRZ/FR-S rides on a stiff, light platform, propelled by a 2-liter flat four mostly from Subaru that musters 200 horsepower.

My tester was a 2015 BRZ Series Blue Edition, which, as far as I can tell, is a long name for some trim and aero packages.

The exterior looks just like it did two years ago, which is sort of a mixed blessing.

On one level, I appreciated the BRZ’s styling because it mostly put function over form.

The long hood, for example, allows the flat-four engine in the Subayota to be mounted behind the front wheels, contributing to its excellent weight distribution.

But it’s not a car that takes your breath away.

The engine won’t leave you breathless, either. Let’s give it high marks, though, for quickness, willingness to rev to its 7,000-rpm red line and compact size.

As one of Subaru’s horizontally opposed motors, the BRZ engine features two cylinders on the left and two on the right that lie parallel to the ground.

The layout, similar to Porsche’s engines, contributes to the car’s low center of gravity, which, of course, helps with handling.

Despite how it felt in daily driving, the BRZ is actually pretty quick, sprinting to 60 in one of Car and Driver’s tests in a respectable 6.4 seconds.

It just never seemed that fast.

So here’s the solution, aside from bolting on some hot tuner turbo and a bees-in-a-coffee-can exhaust system: Stay on curvy roads.

The BRZ’s steering was amazing — quick, well-weighted and twitching with road feel.

With its light weight and great balance, the coupe devoured curves and corners like a 16-year-old attacking a hamburger, only with less of a mess.

Toyota and Subaru clearly placed handling well above ride, which is fine with me. But the result is a car that is fidgety and a bit anxious on smooth surfaces and can be harsh in the rough, hitting big bumps hard enough to induce creaks in the interior.

Moreover, the $30,000 BRZ doesn’t swaddle or coddle you much inside.

Again, function gets the priority.

Look, the BRZ remains a good car with greatness in reach. Mostly, it needs an additional 50 horsepower, and that could happen with the quick addition of a turbocharger.

The interior could also use some refinement.

But leave that platform and suspension — the backbone of the Breeze — alone, please, and don’t jack with its swagger or attitude.

If I can’t stay young, at least let me drive something that’s proudly, fiercely immature.