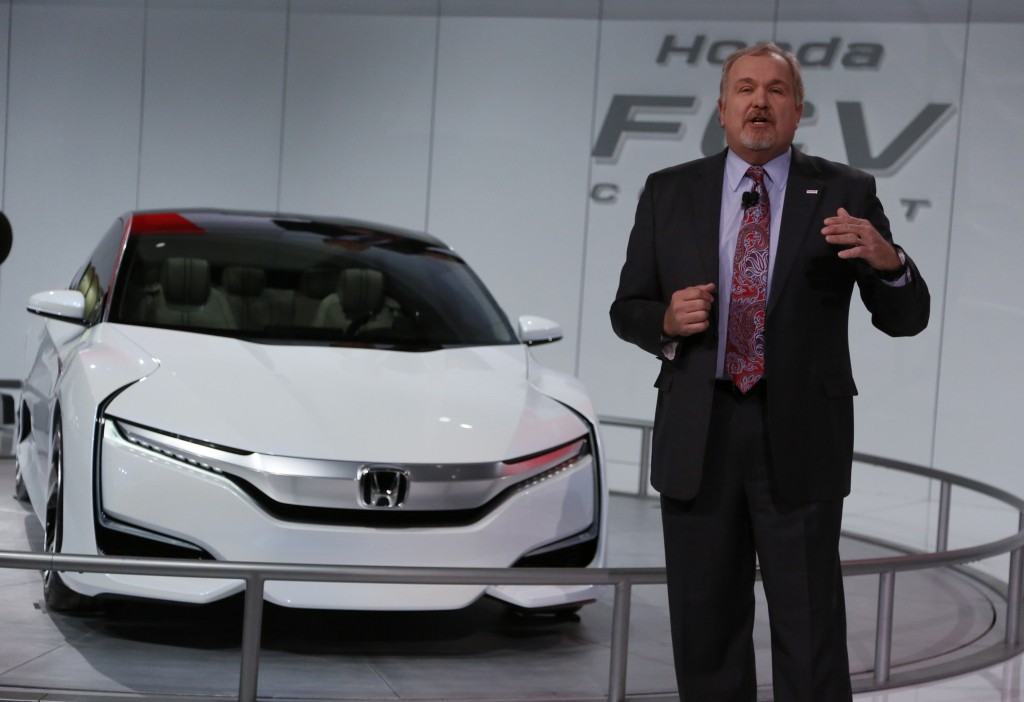 Honda gave its FCV Concept an official unveiling Tuesday in Detroit at the North American International Auto Show, promising to begin selling the hydrogen fuel-cell vehicle in the U.S. in 2016.

Asserting its commitment to reduced-emission cars, the company also promised to offer “several next-generation powertrain vehicles” by 2018 — among them a new battery-electric vehicle and a new plug-in hybrid.

Honda also said it would be investing $340 million in its Anna, Ohio, plant, which will produce the company’s new four-cylinder VTEC Turbo engine. The company said this engine promises “fun-to-drive performance” and extreme fuel efficiency.

With the FCV, Honda joins a growing group of global auto manufacturers exploring the hydrogen space, among them Hyundai, Toyota and Mercedes. They have to face two big obstacles to widespread adoption — the high cost of the vehicles and the lack of hydrogen stations.

The company had previously said the FCV would be on sale in Japan sometime in 2016 and in the U.S. somewhat later.

“No other automaker in the world has the depth of R&D know-how and experience to create such a diverse array of advanced technology products, let alone bring them to market,” John Mendel, Executive Vice President of American Honda Motor Co., said in a statement. “These all-new products and technologies represent significant advancements for our customers and for the future of mobility everywhere.”

Honda had already made a Detroit splash with the earlier reveal of its Acura NSX supercar. This multi-engined hybrid two-seater produces 550 horsepower.

The NSX will start in the $150,000 range when it comes to market later this year, priced to compete with the Porsche 911, Audi R8, Mercedes-AMG GT S and Aston Martin Vantage.

Honda said it will begin taking orders for the NSX in late summer and begin delivering vehicles in late 2015.

The company also announced that it would soon begin making deliveries of its HondaJet lightweight jet, powered by twin GE-Honda turbofan engines made in Honda’s North Carolina production facility.