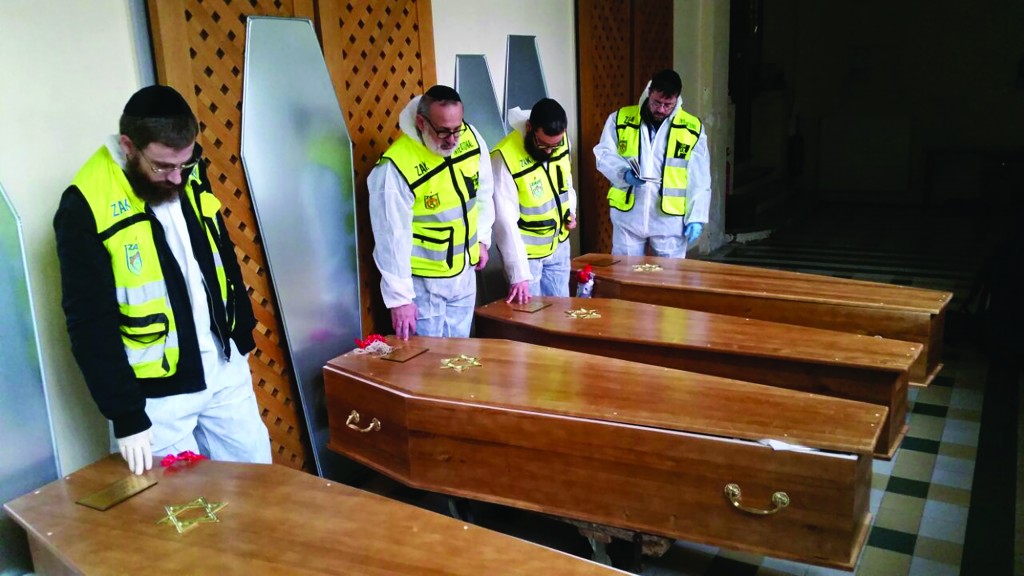 On Shabbos morning, as Jews throughout the world recited the tefillah of Av Harachamim, in which we plead to Hashem to “exact retribution for the spilled blood of His servants,” the thoughts in many minds were of the four Kedoshim who were murdered by a terrorist in Paris on Friday.

As Harav Samson Raphael Hirsch, zt”l, teaches, we don’t daven that we should be able to avenge our martyrs; Jews are not motivated by bloodlust to repay violence and murder with violence and murder. Instead, we daven that Hashem should choose how and when to exact retribution for the blood of the Kedoshim.

The global Jewish response at this pain-filled time should not focus on telling the Jews of France what to do and where to live. Nor should it be a call for stricter security measures by French authorities. Rather, first and foremost, the response of Torah Jews throughout the world must be l’hishtatef b’tzaaran shel Yisrael. We must open our hearts to the anguish of our brethren, to grieve with the families whose lives have been shattered and the countless Jews who live in great fear for their safety.

This past week we learned how, at the age of 12, Moshe Rabbeinu was safely ensconced in the comfort of the royal palace of Pharaoh. Filled with concern about the fate of his brethren, he not only personally went to see how they were faring, but took the heavy burden that each of them was carrying and placed it on his own shoulders, so he could be of help and physically relate to what they were going through.

Filled with enormous compassion, he began to weep. “Woe to me! Who would give that I should die instead of you!”

Subsequently, the Ribbono shel Olam said to Moshe, “You put aside your position [in the palace of Pharaoh] and went to witness the tzaar of [Bnei] Yisrael and exhibited to them brotherhood. I will put aside the upper and lower realms and speak with you!”

Later, Moshe Rabbeinu named his firstborn son Gershom, saying, “I was a sojourner [ger] in a strange land.” He named his second son Eliezer, in recognition that Hashem, the G-d of his father, saved him from the sword of Pharaoh when his neck became as hard as a pillar of marble and the sword of the executioner could not penetrate it.

Many meforshim wonder why Moshe Rabbeinu waited for the birth of his second son before expressing his gratitude to Hashem for saving his life. The Rebbe Reb Yonasan Eibschutz, zy”a, gives the following explanation:

When Gershom was born, Moshe Rabbeinu was under the impression that the time of the redemption was still far off, so he did not express gratitude to Hashem for saving his life; in his immeasurable love for his brethren, he would have preferred to die at the hands of Pharaoh rather than live to see their agony and torment.

Eliezer, on the other hand, was born after Hashem had revealed Himself to Moshe Rabbeinu, telling him to return to Mitzrayim and take Bnei Yisrael out of the hands of their captors. Having heard the good tidings of the imminent salvation of his people, Moshe Rabbeinu was filled with gratitude that he had been saved from the sword of Pharaoh, and so he named the child Eliezer as an expression of this gratitude.

Rabi Zeira (Megillah 28) was asked in what merit he attained longevity. Among the reasons he gave was that he “never rejoiced in the stumbling of a friend.” Harav Yitzchak, the Rebbe of Vorka, zy”a, was once questioned about this. Not rejoicing when another stumbles seems fundamental, and it would be inconceivable for someone as lofty as Rabi Zeira to act otherwise. Why was it considered a special zechus, a reason to merit longevity?

Rabi Zeira was not referring to rejoicing over someone else’s stumbling, the Vorka Rebbe answered. His intention was that when another Yid “stumbled” and suffered some sort of hardship, Rabi Zeira felt his tzaar to such a degree that it eclipsed any happiness he would normally have felt, for wholly unrelated reasons, in his personal life. Even if there was a simchah in his house or he had had stunning success in his affairs, he did not experience any feelings of joy, for his heart was totally immersed in the other person’s feelings.

Along with our grief and anguish, there must also be introspection and thoughts of teshuvah. Am Yisrael is a single, united entity. Though this attack occurred in France, it must serve as a wake-up call to Jews worldwide to search their hearts and take concrete steps towards spiritual self-improvement.

Our brothers’ blood cries out to us from the ground. We dare not remain silent.