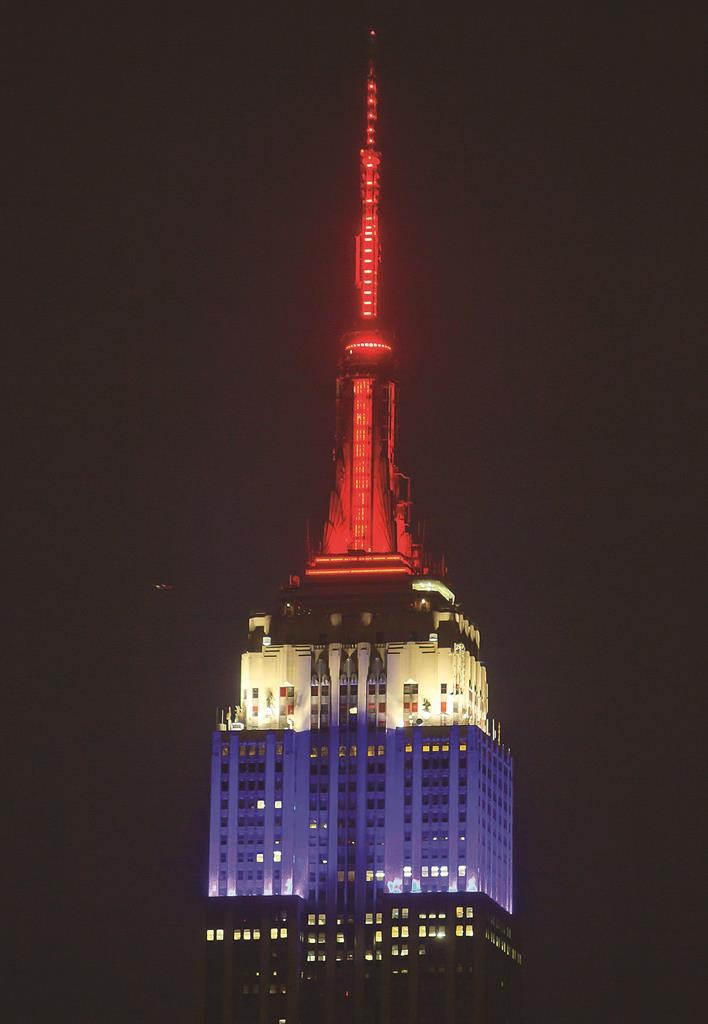 To most Americans, the sky is blue, the Brooklyn Bridge is not for sale, and we learn the ABCs in pre-school. Similarly, the West is at war with radical Islam, and New York’s chief executive must stand with and support the New York City Police Department. Unfortunately, President Obama and New York City Mayor de Blasio live in an alternative universe than the rest of us. … Obama and de Blasio are respectively governing our country and America’s largest city during trying times, and they are failing miserably during this deep and dangerous crisis.

Leadership demands assertiveness, immediacy and direction. Yet, in the midst of clear danger, these leaders are oblivious to the dangers facing us today. They also both refuse to acknowledge the mistakes they have made. Obama fails to acknowledge radical Islam, and de Blasio refuses to face the fact that he has abandoned and maligned the men and women at the front lines of the people’s defense: New York Police Department.

These intelligent — yet overly sensitive — men are allowing their personal ideologies to govern, and are not leading in a world that demands strength.

Consider the breathtaking historic rally [Sunday] morning when 40 world leaders walked arm-in-arm through the streets of Paris to rally for freedom, and to honor the 17 victims of recent terror attacks in France. While French President François Hollande proclaimed, “Today, Paris is the capital of the world,” he was surrounded by leaders including Germany’s Chancellor Angela Merkel, Italy’s Prime Minister Matteo Renzi, Israel’s Prime Minister Benjamin Netanyahu, Former French President Nicolas Sarkozy, King Abdullah of Jordan and others. America was noticeably absent at the rally. Even liberal CNN host Fareed Zakaria declared, “This is what G-d invented vice presidents for,” suggesting that if the president was unable to be there, Vice President Joe Biden or even Secretary of State John Kerry needed to be there. If America is the leader of the free world, American leadership must stand front and center with their allies against terrorism. Yet, attending [Sunday’s] rally would have required admitting that radical Islam must be confronted — something this White House has been reluctant to do.

A true leader would act instantly and convene an emergency conference now, rather than wait for world opinion to shift, other leaders to make plans, or — heaven forbid — more attacks. Instead, Obama’s … White House announced plans to hold a conference on February 18 to counter “violent extremism.” This conference sounds like something Ivy League universities like Columbia should host — grouping together some vague form of “extremism.” Who are these extremists who slaughter fearlessly? Are we talking about Hasidic Jews? Midwesterners with guns? … Or is it elements of the “religion of peace” which must be addressed? What happens between now and February 18, Mr. President? Should the world wait for your position paper to act?

We see a very similar trait in the lack of leadership, assertiveness and understanding the importance of time when it comes to New York Mayor Bill de Blasio. While the New York Police Department is demoralized and its members under attack, de Blasio focuses on banning styrofoam. The chief executive of our city, after months of strife between his administration and the greatest police department in the world, has made no conciliatory moves or actions towards them; in fact, he is maintaining his indifferent stance. With the police themselves not feeling safe on the streets, de Blasio continues to escalate his negative rhetoric. While multiple politicians and leaders have called upon him to apologize, he is defiant in his refusal. Rather than act as the leader of the entire city, he operates as a small-minded politician. He condemns police who act out of anger — and represent their constituencies — remaining oblivious to the depth of frustration within the Police Department and of the citizens of this city.

How hard would it be for Mayor de Blasio to spend a night in a squad car on patrol as a positive gesture that demonstrates an appreciation for the perils New York’s finest face? Instead of meeting with police officials, he meets with protestors. He reappointed a judge whose decisions have been opposed to maintaining law and order. De Blasio’s continued defiance is a danger. He must take steps to make our police feel secure, which in turn makes our citizens feel safer.

Investor’s Business Daily noted this weekend that de Blasio seems “bent on escalating the war with the NYPD.” As they write, “The cops are turning their backs on de Blasio because he turned his back on them. Like no other mayor before him, he has thoroughly lost the respect of the police and is at risk of losing control of the Big Apple.” In a world of extremist violence, BDB’s ego trumps the importance of a safe and secure city.

Obama and de Blasio are smart men, but are scarily oblivious to that which is obvious to so many of us. Their perception of reality may not change — but leadership demands they see the reality of the masses. Leadership demands insight and maturity that neither has demonstrated. Neither has put aside ego to admit they are wrong, bruised sensibilities, or their personal ideologies to rise above politics and move towards strength. Human beings make mistakes. Even the greatest men and women of the world have made mistakes, but the mark of leadership is to admit mistakes, face difficulties and move ahead.

While the rest of the free world stood up [Sunday] against Islamic terror, America was absent. President Obama must stand up and face the music that the danger is radical Islam and must align with other Western leaders against terror. Act. The mayor must turn towards the NYPD and let them see he is not an enemy. He must stand with the police department.

Neither of these decisions are hard ones. These men must lead rather than dig their heels in, hoping the issues pass them by or others lead. Sadly, neither gets it, and both appear hopelessly stuck. Chief executives know the power of immediacy, of decision-making, and of compromise. These characteristics are lost on Obama and de Blasio.

If they cannot confront their demons, they are putting the safety of their citizens in serious jeopardy. We need true leadership. G-d bless America.

Ronn Torossian is a life-long New Yorker. He is an entrepreneur and author — who is concerned about the future of our city and country.