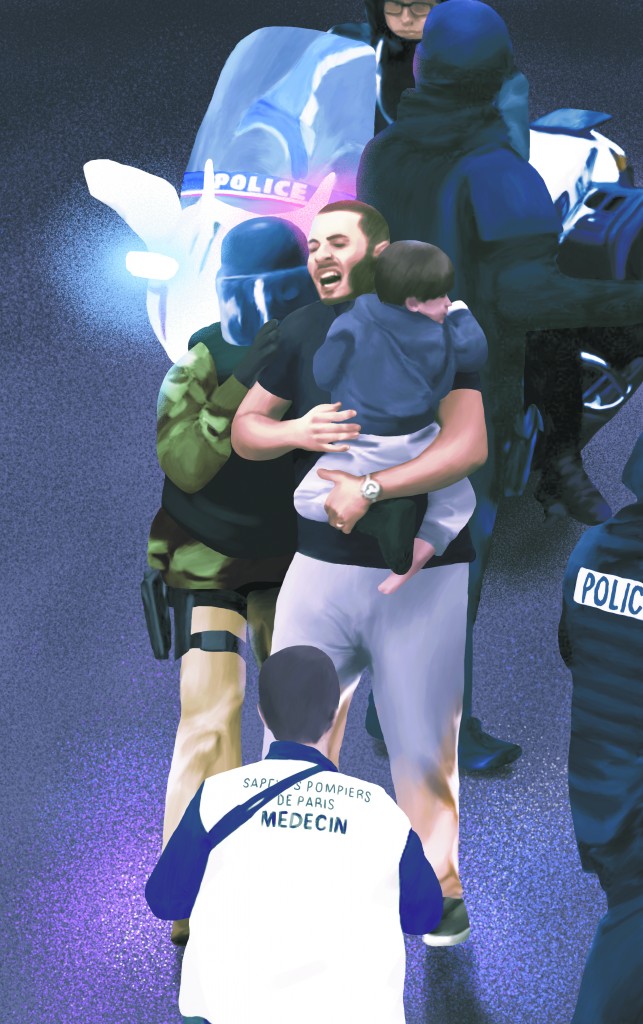 That refrain, to me, is perhaps the most salient of statements made this past summer in Paris during the Israel-Gaza conflict. Hordes of demonstrators — composed of far-right National Front-ers and “disenfranchised” Arab youths — broke into a spontaneous and fervent chant on a Paris boulevard, declaring, “Jews, get lost! France doesn’t belong to you!”

At the height of the summer conflict, being more focused on the events unfolding in Israel, such invective garnered very little of my attention.

France is not the first country to have a hateful bunch of “disgruntled” citizens express a desire to see their country made Judenrein. So I figured, given France’s long history of accommodating its Jewish population — although its lapses throughout history in protecting its Jews had been severe — we would not arrive at the “end phase” of French Jewry so soon.

The events of this past week started with a publicly displayed religious assault on basic freedoms — the freedom of speech, expression and press — in vengeful and merciless fashion. It culminated with a globally broadcast attack on the most basic human right, the right to live. The French responded with shock and horror, and after Wednesday’s attack on Charlie Hebdo, everyone in France was Charlie. Not that everyone shared the previously marginal satirical magazine’s ideology, but everyone shared in the desire to protect a freedom so basic and cherished. Je suis Charlie. I am free speech. Fine.

Then came Friday. Hours before Shabbos, as Jews of Paris were making their last purchases at a local kosher supermarket, an armed-to-the-teeth terrorist stormed the store, guns blazing. The scene bloodied immediately, as the hostile takeover was meant to clearly demonstrate who was targeting whom. The terrorist could later be heard ranting (he’d forgotten to hang up the phone after making a call to a French journalist) that he was specifically targeting Jews. All of France said, “I am Jewish! Je suis Juif!” Except they didn’t. Only the Jews did.

Suddenly a France that felt united because an attack on one’s freedom of speech is an attack on all didn’t feel the same way when it came to those French citizens who were targeted not because they said something wrong, but because they were simply of the Jewish brand. The show of solidarity, of unity, of “liberté,” only extends so far. France is Charlie. France is not Juif.

There’s a crystal clear message in what just transpired. How a nation can unite behind the banner of freedom of speech, while neglecting the more basic right to life, should be all the Jews of France need to know about their future prospects in the country of revolution. It’s not that most French people hate Jews actively; it’s that they care for them passively, and thus have no desire to protect their Jewish population. They barely have the desire to rescue their own culture from the hands of Islamic extremism that has flooded the country, so of course they wouldn’t care to protect the Jews of France.

Manuel Valls, the prime minister of France, said, “If 100,000 [of the nearly 600,000] Jews leave, France will no longer be France. The French republic will be judged a failure.” It’s unfortunate that his sentiment isn’t shared by a critical mass in France, because he’s absolutely right. History has shown how the countenance of a country shall appear once it has rid its borders of those pesky Jews. In Morocco, one will often hear Arabs lamenting the loss of their “Jewish neighbors and cousins” and they are regretful they didn’t act in time to keep their Jews safe before it became too late.

If after Toulouse, the Jews of France projected emigrating within 5–10 years, after this week, it’s down to 1–2. For my own family, whose safety and security I’m responsible for, it’s down to six months. While I don’t believe we can make as if France has not served its Jews well at different periods in its history, I’m absolutely convinced that they’re failing us and themselves now. It’s not as though greater security will necessarily be achieved elsewhere for the Jews of France, as Hashem is our security everywhere. Nonetheless, an environment where Jews are legitimate targets and their compatriots fail to act in their defense is not the one in which I want my child growing up.

It’s not often that I’ll agree with any statement that emerges from the throngs of angry protesters on the French Arab street. But to my family, friends and fellow French Jews, I must sadly echo their sentiment and declare, “Juif! Casse-toi! La France n’est pas à toi!”