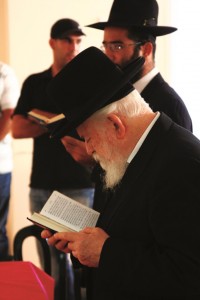 The city of Modiin Illit was plunged into mourning yesterday with the sad news of the passing of Harav Hillel Zaks, zt”l, Rosh Yeshivas Knesses Hagedolah–Chevron in Modiin Illit. He was an eminent Rosh Yeshivah who disseminated Torah to thousands of talmidim, and was a grandson of the Chofetz Chaim, zy”a. He was 85.

Thousands of his talmidim and residents of the city tore their clothes in mourning, as is the halachah of a talmid for his rebbi.

Harav Zaks was a bridge to a previous generation, and displayed mesirus nefesh for Torah learning and serving Hashem. His fiery shiurim helped imbue his many students with a love for Torah. At the same time he traveled extensively to support the yeshivah. He was a role model of someone who lived only for Torah, and needed nothing in this world, and his greatest desire was to draw others to Torah.

The residents of Modiin Illit welcomed this elevated personality who came to live among them when the yeshivah opened in the city. People he spoke to marveled at his ability to explain the deepest concepts in a simple fashion. He had a masterful ability to take complex sugyos in the most difficult masechtos and to break them down for the younger students.

At the beginning of the week, Reb Hillel felt unwell and collapsed in his home. After initial medical treatment, it was decided to take him to the hospital, where he was admitted in serious condition. Doctors battled for his life while at the yeshivah and in many shuls in Modiin Illit, hundreds of talmidim and residents davened fervently for his recovery.

On Tuesday afternoon his condition further deteriorated, and a short time later, in the presence of family and close talmidim, he returned his soul to its Maker. As soon as the news arrived at Yeshivas Knesses Gedolah, the Mashgiach made the brachah of Dayan Ha’emes, which the talmidim repeated, and the paroches was removed from the aron kodesh.

One talmid related that in addition to his constant Torah learning, the Rosh Yeshivah displayed sterling middos bein adam l’chaveiro. “He knew how to treat each person with warmth and love, and to respect every single person, making a talmid feel like he was the center of his world. When he spoke to you, you felt like you were the only person in his world right now.”

Harav Hillel Zaks was born 85 years ago in Shevat 5690/1930 in the village of Radin, Lithuania. His parents were Harav Menachem Mendel Zaks, zt”l, and Rebbetzin Faiga, a”h, the daughter of the Chofetz Chaim, zy”a. Reb Hillel was born in the lifetime of the Chofetz Chaim and remembered sitting on his grandfather’s knee.

At the age of eight, when the Red Army invaded Poland, he moved with his family to Eishishok, and later to Vilna. After receiving entry visas to the United States, the family crossed the Soviet Union to reach Japan and then traveled to America.

Already at the age of nine his brilliance was apparent, and he quickly absorbed everything he was taught. He learned under Harav Moshe Feinstein, zt”l, in Mesivta Tiferes Yerushalayim, studying sugyos in Shas and halachah together. Later, he learned in Torah Vodaath, under Harav Reuven Grozovsky, zt”l, son-in-law of Harav Baruch Ber Leibowitz, zt”l, the Birchas Shmuel. Later he learned in Lakewood, which had been recently established by Harav Aharon Kotler, zt”l.

For 10 years Harav Zaks lived in the same building as Harav Aharon Kotler, and they became very close. Reb Hillel accompanied him frequently, and had the opportunity to ask questions in halachah, and received clear answers.

Aside from the many shiurim he heard from Reb Aharon in the yeshivah, and the pilpulim that Reb Hillel presented to him, Reb Hillel was able to ask for guidance on any subject and he received it.

Reb Hillel’s reputation as a talmid chacham began to spread, and his diligence in Torah earned him renown in the yeshivah world. He learned b’chavrusa with Harav Schneur Kotler, zt”l, and, ybl”c, Harav Shmuel Kamenetsky, shlita.

Some 60 years ago he married the Rebbetzin, tichyeh, the daughter of Rosh Yeshivas Chevron Harav Moshe Chevroni, zt”l. The shadchan was Reb Aharon, who was a relative. After his marriage, Reb Hillel lived for a few years in America, and then moved to Eretz Yisrael, where he settled in the Geulah neighborhood, near Chevron Yeshivah. He was appointed Rosh Yeshivah of Chevron, alongside Harav Simchah Zissel Broide, zt”l, and Harav Avraham Farbstein, zt”l. In 5756/1996 he established his own yeshivah, Knesses Hagedolah, in Modiin Illit, then known as Kiryat Sefer; the yeshivah was also known as “Reb Hillel’s Yeshivah.”

Reb Hillel conveyed his unique way of learning, and became known for his in-depth, masterful shiurum in all subjects of Torah. He also advocated the mussar shittah of Yeshivas Slabodka, which revolves around the concept of gadlus ha’adam and dignity, as is fitting for a ben Torah and ben Melech. His most famed mussar drashah came every year before Kol Nidrei on Erev Yom Kippur and it elevated the talmidim to great heights on this holy day.

Harav Zaks was also proficient in sifrei Kabbalah, specifically those of the Maharal and the Ramchal, and he quoted them often.

Reb Hillel’s home was open to all, and his multitudes of talmidim knew they could go there any hour of the day. In every corner, talmidim could be seen eating meals, learning, and just basking in the atmosphere. He would be there for his students through any tribulations, no matter how minor or how severe, and he would guide them. On Yamim Tovim, dozens of talmidim would sit around his table as he shared pearls of wisdom and Torah, most notably from his grandfather the Chofetz Chaim.

Reb Hillel tried to avoid public appearances, preferring to keep a modest profile. He hardly attended any gatherings of any kind. In one unusual case, two years ago, at the fiftieth anniversary of the establishment of Lakewood Yeshivah, he participated as a keynote speaker and spoke of the legacy of Reb Aharon, with whom he was so close.

The levayah departed from his yeshivah in Modiin Illit on Tuesday.

He is survived by, ybl”ch, his eishes chayil, Rebbetzin Esther Zaks; his son and successor, Harav Yitzchak Zev Zaks, the Rosh Yeshivah; and his daughters, Mrs. Chana Eliza Mann (wife of Harav Chaim Mann) and Mrs. Miriam Vilinsky (wife of Harav Tzvi Vilinsky), as well as grandchildren and great-grandchildren.

This article appeared in print on page 38 of the January 14th, 2015 edition of Hamodia.