World On the Gloomy Streets of Paris
World 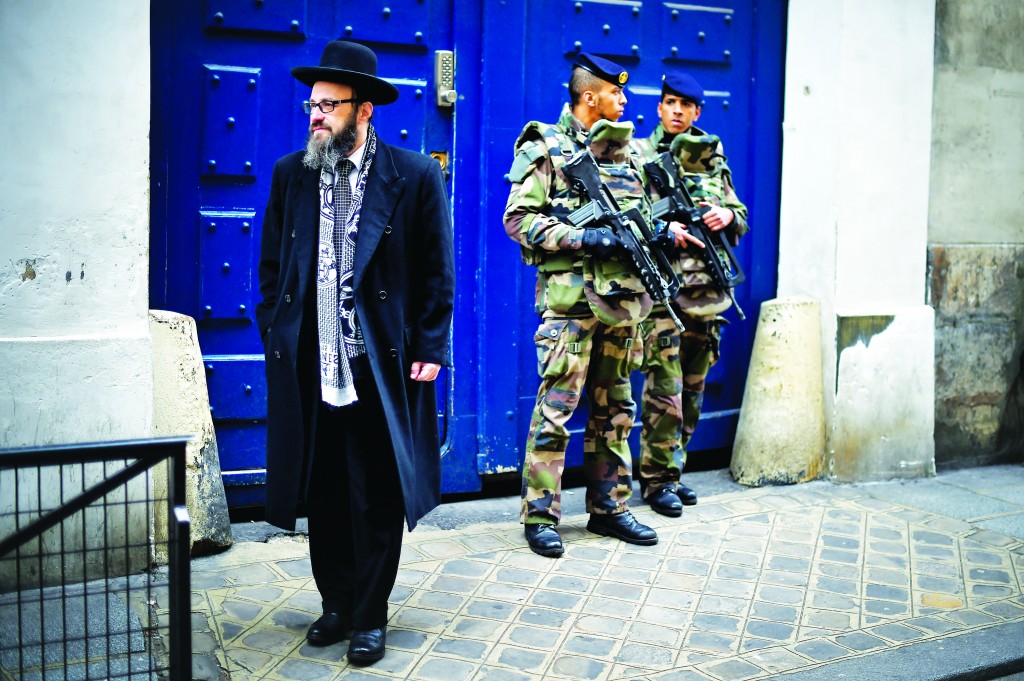 From the moment we arrived in the Paris neighborhood that was the scene of last week’s terror attacks, we immediately felt tension and fear everywhere we went. Having driven overnight from London, we came to our hotel, less than a minute’s walk from Hyper Cacher, at around six in the morning. The streets were deserted save two police cars directly in front of the crime scene. The rest of the area was empty of any police or civilian presence at this early hour.

To be perfectly honest, we were petrified as we walked the empty streets. Mostly, we feared the unknown, especially as reports had begun to circulate that six more members of the infamous terror cell were now on the loose. Before speaking to a soul, we had a strong taste of what it means for French Jews to live their daily lives in fear.

Later that morning, we went to Khal Makom Torah for Shacharis. On our way, we realized that all the Jews we saw on the streets were walking in pairs, no one alone. It was one of many painful reminders of the tense state of affairs.

The shul is only a few short minutes from Hyper Cacher. Nearly all of its members shop there and three of them, a man and a woman with her infant son, were among those trapped inside during the standoff. B’chasdei Hashem all survived. The man, as well as the husband of the woman, were in shul together with us.

The outside of Makom Torah looked more like a war zone than a local shul. The street was closed to vehicle traffic, as we were told, for fear of drive-by attacks. Police with machine guns stood at the entrance with several more sitting in a van. We were not allowed to take any photographs of the building.

Inside, the beis medrash was buzzing. Those who had attended the first minyan were shuffling out as those joining the next minyan, together with the Rav, Rabbi Dovid Levy, filed in.

Before davening we spoke to the shul’s president, Shalom Bitton. He expressed the feelings of the kehillah as “absolute fear and sadness,” tempered with a deep feeling of gratitude to Hashem for the many lives, including friends, neighbors, and loved ones, that were miraculously saved. Mr. Bitton said that many of the community’s younger members had now begun planning aliyah.

“As things calm down, the rush of people looking to leave will become less,” he said. “People don’t really want to leave France, but they are literally scared for their lives. We will always have to be vigilant.”

Mr. Bitton told us that the shul has an official escape route should there ever, chas v’shalom, be an attack, and a clear emergency plan.

Shacharis itself was an incredibly moving experience. People davened with tremendous earnestness and krias Shema was similar to what we are used to hearing on Kol Nidrei night.

During krias haTorah, the man who had personally survived the ordeal was called for an aliyah, after which he recited birchas hagomel [a blessing for those saved from danger]. He became very emotional, choking his way through the brachah itself and then breaking down in tears upon finishing. He pledged to donate a kiddush as a gesture of gratitude for his rescue. Every single one of the approximately 40 people in the minyan went over to him afterward to hug him and offer their best wishes. The unique scene of achdus was a heart-rending experience. Every single person there felt and shared in his ordeal.

After davening, we spoke to the husband of the woman who hid in the refrigerator together with their baby son during the standoff. He told us of the symptoms of the terrible trauma that she is still suffering with. He would not give his name or that of his wife, saying that she feared the terrorist’s allies could still target her.

“My wife is originally from Israel and now wants very much to go back, but I have no way of making a living there. There’s no way that we could do it,” he said. “If we could work it out, though, it might be the best thing to help her leave the past behind and move on.”

As Shacharis ended, those present went into an adjoining room and ate breakfast together. Rabbi Levy spoke passionately about the tremendous chassadim that the survivors had experienced.

“We must use this event to remind us of the kindness that Hashem does for us not only in such dramatic situations, but in everyday life as well,” he said.

Heeding the plea of their Rav to increase Torah study, nearly the entire shul remained for some time afterwards. About 25 men attended a shiur in Maseches Shabbos, delivered by Rabbi Levy. Others learned b’chavrusa, and the shul was filled with the sound of learning.

Throughout the day, hundreds, maybe thousands of French men and women of all ages and walks of life flocked to Hyper Cacher to honor the victims by lighting candles and by leaving flowers and notes.

As a result of our obviously Jewish appearance, scores of people approached us. Despite having only arrived from London hours earlier, and our plans to return that evening, we became symbols of something that France seemed to feel the need to express condolences to and show support to.

A Muslim proudly proclaimed that he had come to support the Jewish community in their time of strife, repeating that not all of his co-religionists are terrorists.

A French Christian said that the brothers who attacked the magazine office only refrained from targeting Jews, even though two of their victims also turned out to be Jewish, because they knew that there accomplice was planning to target Jews.

Throngs of press began to arrive in anticipation of Israeli Prime Minister Netanyahu’s visit to pay his respects to the site. As the only visibly Jewish media representatives, we were given first-class treatment and given a prime spot. In the end, the Prime Minister only addressed the Israeli media, seated separately from other press.

Throughout the afternoon, we wandered the streets and spoke to Jews and gentiles alike.

Nowhere could we escape the feeling of uneasiness that had greeted us from the moment we set foot in the city.

We returned to Makom Torah for Minchah later in the afternoon and spoke extensively with Rabbi Levy. After davening, he announced the mass atzeres planned for Motzoei Shabbos for all groups of Paris Jewry.

After a long day, we headed back to London, carrying with us a whirlwind of emotion, sadness, and empathy for our brothers in France.