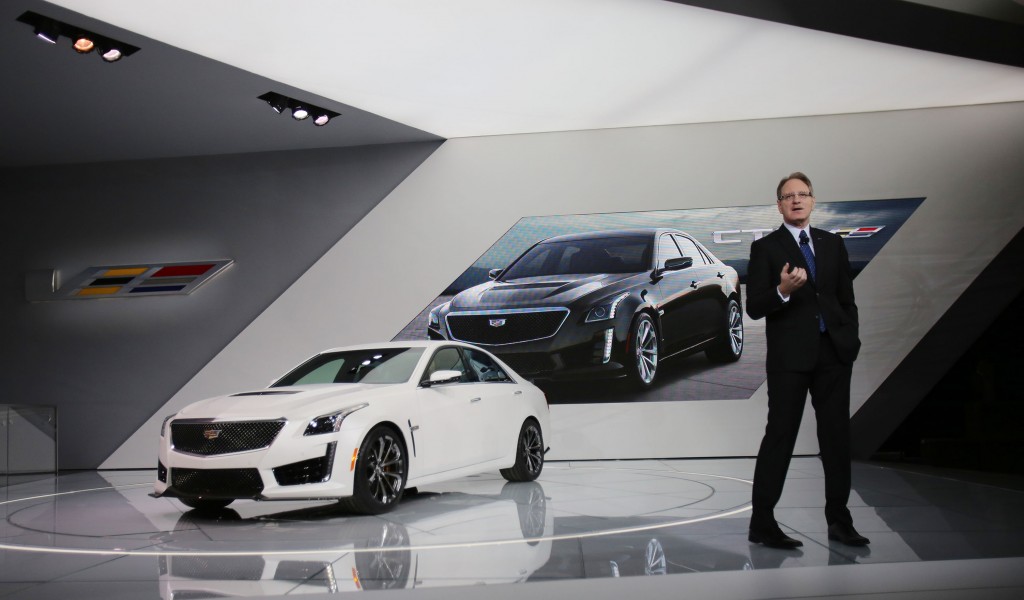 “The new CTS-V is the most compelling example of Cadillac’s product substance and brand trajectory,” Johan de Nysschen, Cadillac’s president, said ahead of the unveiling. “The new CTS-V soars into the stratosphere of the most exhilarating luxury cars.”

Having 640 horsepower helps put anything into orbit. That power is courtesy of a 6.2-liter supercharged V-8 engine, ripped out of the new Corvette Z06. The motor pumps out 630 pound-feet of torque, and comes with direct-injection and cylinder deactivation for better fuel economy (no figures were announced).

That power is pushed to the rear wheels via an eight-speed automatic transmission with paddle shifters. All that grunt makes the CTS-V the most powerful car in Cadillac’s 112-year history, and capable of 0-60 mph in 3.7 seconds.

A ventilated carbon fiber hood, Brembo brakes and GM’s magnetic ride suspension are standard. The suspension has been stiffened and retuned for the occasion, there are four drive modes (tour, sport, track, and snow) and the CTS-V comes with 19-inch aluminum wheels wrapped in sticky Michelin Pilot Super Sport tires. A limited-slip differential is also standard.

The CTS-V is the second high-performance debut from Cadillac in recent months. The brand unveiled the 455-horsepower ATS-V at the LA Auto Show in November. That car will be available in coupe and sedan form, and with a manual or automatic transmission. Pricing hasn’t been announced for the CTS-V, but starts between $80,000 and $90,000. The ATS-V hits the market this spring, while the CTS-V goes on sale in late summer.

Models like these will grab headlines and raise pulses at a time when Cadillac could use the help. Sales of the brand were down 6.5 percent in 2014, and they would have been worse had it not been for the popularity of the new Escalade full-size SUV.

Despite its woes, there is plenty in the company’s future, including a full-size sedan called the CT6 aimed at the Mercedes S-Class and BMW 7 Series, as well as several crossover SUVs and possibly even a smaller, entry-level sedan below the ATS.